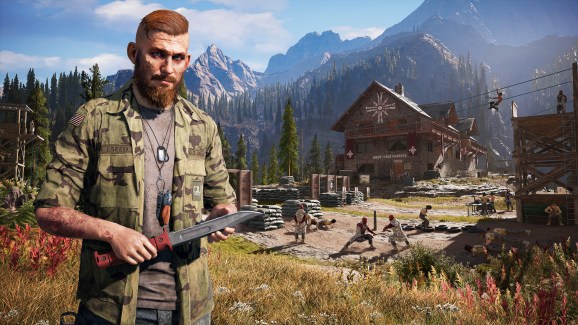 Every religious madman needs their apostles. Jacob Seed leads what I call the "faith militant" arm of Eden's Gate.

March didn’t see many blockbuster releases, as compared to 2017 when The Legend of Zelda: Breath of the Wild and Tom Clancy’s Ghost Recon: Wildlands debuted. But it did witness the rise of 2018’s new bestseller: Ubisoft’s Far Cry 5. Players have said yes to the latest installment in the open-world series, which became the fastest-selling title in the franchise and generated $310 million in its first week.

Here are the numbers for March:

“Far Cry 5 debuts as the top-selling title of March 2018 and instantly becomes the best-selling title of 2018,” NPD analyst Mat Piscatella said. “Far Cry 5 set a new launch month sales record for the Far Cry franchise, with consumer spending on full-game sales nearly doubling that of previous franchise best, Far Cry 3. Publisher Ubisoft is the leading publisher in both March and 2018 year to date (January through March).”

Far Cry 5 swept the console charts, but it’s not the only new game that saw success last month. Microsoft and Rare’s co-op pirate simulator Sea of Thieves launched on March 20 and earned a No. 2 spot in the best-sellers list despite only rolling out to Xbox One and Windows 10. Its debut came after several closed-beta sessions that drummed up hype. More than a million players set sail on the open ocean within the first two days, crashing its servers at one point with all their plundering and pillaging.

Along with Far Cry 5, other franchises also set launch month records. Sony’s MLB 18: The Show and Hal Laboratory’s Kirby: Star Allies both had the best-selling debuts in their series histories.

Compared to March 2017, consumers spent less on hardware last month — $331 million, down 32 percent from $485 million. But year to date, hardware-spending is at a high, generating $925 million so far in 2018. This was driven mainly by Microsoft’s Xbox One, though Sony’s PlayStation 4 remains the best-selling console in March and 2018. The Nintendo Switch 32GB with red and blue Joycon controllers was the best-selling hardware in March and 2018.

While folks weren’t spending as much on consoles last month, accessories saw an uptick thanks to the popularity of multiplayer games like certain wildly popular battle royale hits.

“Both PlayStation 4 and Xbox One achieved accessories sales growth of more than 40 percent in both the month of March as well as year to date 2018,” said Piscatella. “The headsets/headphones segment is driving accessories growth across both platforms, likely driven by the increase in popularity of multiplayer games such as Fortnite from Epic Games.”