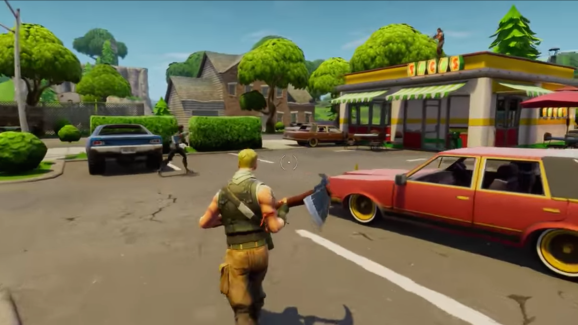 Epic Games will have a $100 million prize pool for Fortnite in the next year.

Fortnite: Battle Royale had a chart-topping month in March, and the good news keeps on coming for developer Epic Games. The popular last-player-standing is now the biggest free-to-play console game ever in terms of revenue and monthly active users, according to industry-tracking firm SuperData Research. And in March, it generated $223 million on PC, Xbox One, PlayStation 4, and iOS.

Consumer spending was down slightly last month when it comes to free-to-play PC and social games, but console revenues made up for it. People spent $8.9 billion across platforms in March, which is up 2 percent year-over-year from $8.7 billion in 2017. Fortnite saw a big increase in revenue from February — its $223 million is up 73 percent. Its popularity got a bump from the star power of musician Drake livestreaming the game to over 600,000 viewers on Twitch as well as in-game items and events. The latest is a mysterious emergency broadcast alert that may hint at the destruction of the in-game location Tilted Towers.

Moving out of Fortnite’s formidable shadow, other titles also had a good March. Neople’s multiplayer beat-’em-up Dungeon Fighter Online pulled in the most revenue in the free-to-play PC category, and Chinese tech giant Tencent’s mobile racer QQ Speed has earned over $100 million for three months in a row. King’s Candy Crush Saga continues to grow year-over-year, and it had its best month yet since 2014.

Out of the free-to-play space, Ubisoft’s Far Cry 5 and Rare’s Sea of Thieves both had great launches. SuperData estimates that Far Cry 5 has sold 2.5 million copies on PC and consoles, up almost 500 percent from the sales of the 2016 Far Cry Primal. It also became the top-selling game of the year, according to The NPD Group, which also ranks Sea of Thieves as the No. 2 best-seller in March.

SuperData approaches Sea of Thieves’ success with some caution, though. It reports that the pirate simulator has garnered 1.7 million monthly active users playing on console and 283,000 on PC, but over 50 percent of these players are using a free trial through the Xbox Game Pass. Hopefully the title will gets its sealegs and the numbers won’t drop once people’s trials expire.