I knew that, as the mother of a junior geek and the spouse of a Nintendo fanboy, I was doomed to get the Nintendo Labo. It’s a combination of a model-building kit and a video game that clearly hit all the marks for my family. And if you’re enough of a Nintendo fan to have a Switch already, you might also have to go for it. In short, if you think you might like Labo, you probably will.

Friday morning, the day of its release, I ordered the Nintendo Labo Toy Variety Kit ($70) from Target for in-store pick-up and headed out to get it and a playtester — my 10-year-old kid, James.

The main interface leads you through Make, where you follow instructional animations to build the pieces; Play, where you get to put those controllers to use in the games themselves; and Discover, where you learn how to expand on the controllers’ abilities. For a single user, this progression works quite well.

Make walks you through building a variety of projects using pre-punched cardboard pieces. The directions were clear and the animations allow the player to control their own pace, zooming and tilting the view and running the instructions forward and backward.

Discover presents itself as a chat between the player and three NPCs: Professor Gerry Riggs (lol, get it?); a technical expert named Lerna Lotte (ha ha ha, get it?!); and Plaise Allatyme (get it? So punny), a kid game tester. This is perfect for a pre-tween like James, who does not have a phone but who really enjoys Google Hangouts and chatting in Animal Jam.

One of the easiest builds, with the biggest payoff, was the RC car. I was wondering how we would put together rolling wheels out of cardboard. The secret: no wheels.

Instead, the car moves using vibrations from the Joy-Cons, which jiggle its jagged cardboard legs to move it forward. The right controller has an infrared camera that lets you see what’s ahead of the car, even in the dark — the instructional video showed someone driving the car inside their kitchen cabinet, navigating around green-glowing cups using the display.

You can control the car using a console on the Switch screen, but even cooler, you can set it to drive itself. The camera reads signals off reflective tape dots (included in the kit) to read when to stop. Apparently you can also set up paths using reflective tape for the car to follow. “That car amazes me so much, and it only took 5 minutes to make,” said James. “I drove a car just using vibrations.” 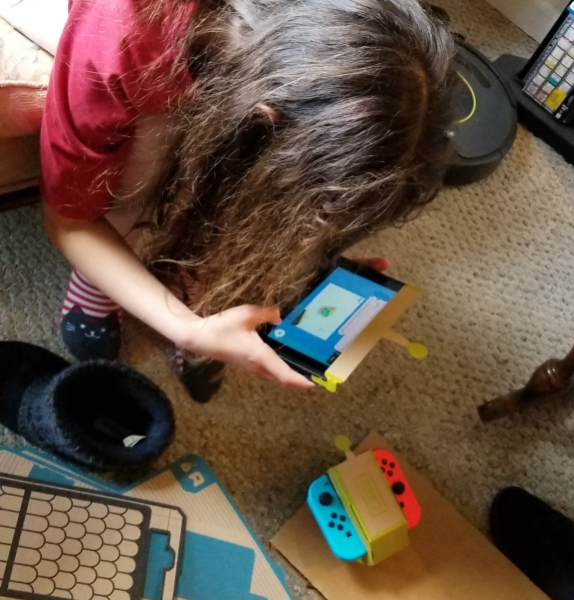 Above: James drives the Labo RC car in our already crowded living room.

Fishing seems to be the classic demonstration of game technology, and I’ve played fishing games on consoles such as the GameCube and devices like the Oculus Rift. The gameplay is pretty standard here: You drop the line into the ocean, jerk up a little to hook a fish when it nibbles, and then reel it in. But the magic is that you are building the controllers, so you know how and why they work.

“Technology’s amazing,” James said, after assembling the fishing rod and the ocean-in-a-box. “So both [Joy-Con controllers] are motion-sensing. One senses the reel, and the other, the handle.” This game really pulled back the curtain.

This game also inspired us to see if we could modify how we viewed the game. “It would be cool to just chill on your couch and fish,” James said thoughtfully. So we hooked the Switch up to the TV — instead of dropping the console into the pocket on the front of the ocean box — and did just that. 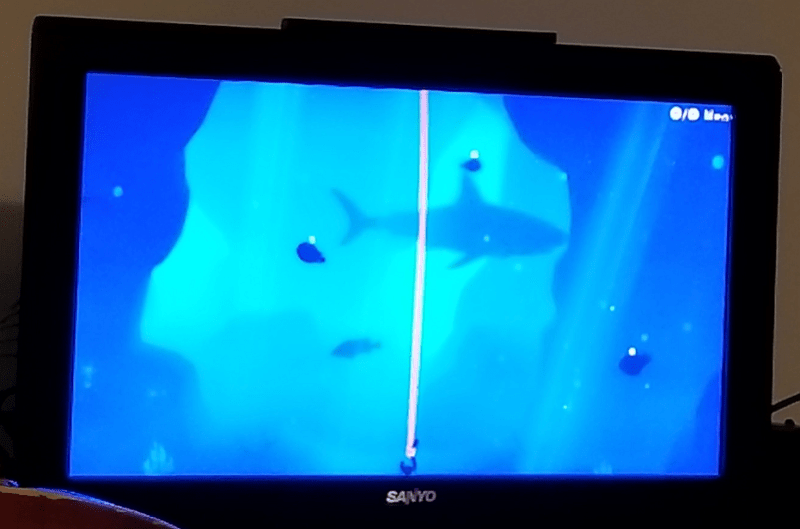 Above: You can play Labo games on your TV, just like any Switch titles.

Doing so let us both enjoy the game, whoever was actually playing, and also kept the Switch charged (otherwise we ended up having to recharge the console after about 3 hours of play).

The piano is both the hardest model to build and the most powerful. Its module lets you play music on a one-octave keyboard. You can also trigger different sounds, switch between different scales, and even record your music in the studio (although I don’t know how or whether you can share your work outside of the Switch, except by recording it on your phone).

The top slot on the piano is the secret weapon. Within the music game, you can insert a punch card to trace out rhythm effects: hi-hats, cymbals, snare drums, and bass drums executed on the beat. But that’s also where you insert the template for generating your own fish designs for the fishing game.

Learning about that feature had James skipping past the other projects to build the piano, and now our ocean (and his aquarium) are filled with fish that look like polka-dotted toothpaste tubes and striped bow-ties. “I still think it’s weird you need a piano to make fish,” he said — then made more fish. 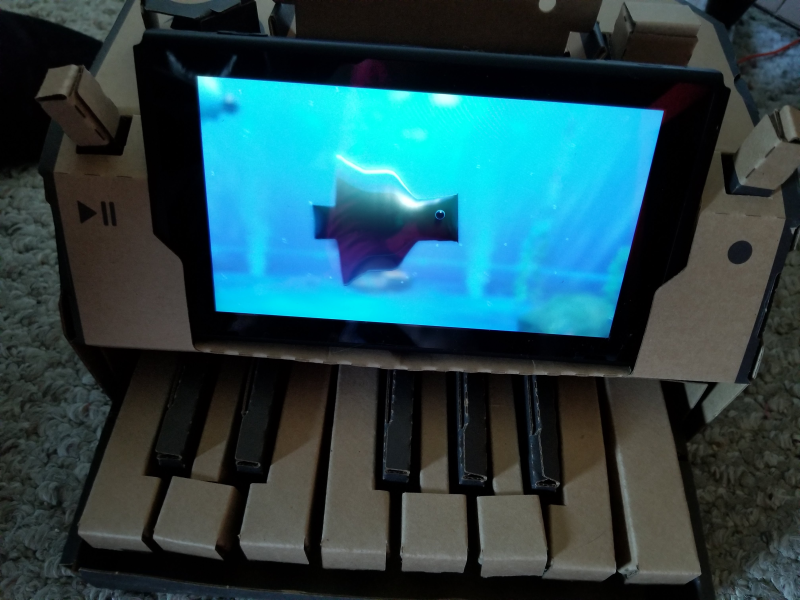 Above: A custom fish James created on the Labo piano.

The Garage is where you go to program using the Labo parts and the Switch. You can set up combinations with and/not operands, use different kinds of input as triggers, and set various kinds of output — including specific piano and guitar notes. That set me thinking about how I could create a music box card to make the model into a player piano. Honestly, I probably won’t do it, because I’m lazy, but I bet one can. And this is the Labo effect; it made us feel inspired.

If you’re a racing game fan, the bike game is pretty enjoyable. I had fun speeding and leaning and bumping along on the various tracks, but the throttle vibrations authentically made my hands unpleasantly buzzy. It is kind of cool to have a handheld home version of the arcade ride-on racers, though.

I have to say, the bike build was maybe even harder than the piano. James had to get his dad’s help at one point, and even after that, I ended up having to reattach rubber bands to the throttle when I finished the build. Whether you find it worthwhile or not depends on how much you like racing games. “I’m bored,” the kid announced after one race and went back to the piano to lay down rhythm tracks.

This review barely touches on the house game, mostly because I have no idea what you’re supposed to enjoy about it. For me it’s the only misfire. It feels more like a demo of Labo’s capabilities than anything fun. James liked customizing the critter who lives inside the house by feeding it colored candies, but the other actions, like turning water and lights on and off, were underwhelming. The actions themselves were technically interesting, but not enjoyable as a game.

Not ideal for multiple users

The bike build, which we took turns attacking, revealed a flaw in the dummy-proof build animations: You can’t easily skip ahead to the Play section under a different username. Even if all the parts are already built, you seem to have to fast-forward through the build instructions in Make to get to the games. Adding a way to indicate your controllers are already set up would improve the experience for multiple users.

Too many fiddly bits

My main concern with Labo is whether the cardboard will survive a pre-tween, a mom prone to spilling her coffee, and a cat who is extremely interested in boxes. It’s been less than a week, but so far, so good. Nintendo is selling various replacement sets for $3 to $12 ($14 for the Labo Robot Kit’s main body set), but you can make your own using the free downloadable templates.

The most annoying aspect for me has been keeping track of all the little fiddly bits. We seem to be missing one grommet, which makes our ocean look pretty chintzy, but I also did some dumb-ish things like poking out and discarding some dots and bars that turned out to be important to the piano’s rhythm card and the clock overlay. (In my defense, most of the little circles and slots that needed to be poked out were to be discarded. Just not, apparently, all of them.) We immediately lost the foam stickers, but fortunately, they don’t seem to be vital. Above: So many little cardboard pips to keep handy.

Exploring the games more deeply led to a very Nintendo element: the upsell. The video that leads you through all the advanced features of the RC car (including such high-tech ideas as drawing on the cardboard shell to turn it into a cat) mentions that you can stage robot fights by using a second set of Joy-Cons. Now guess what my kid wants us to buy next.

It would also be nice if Nintendo provided more reflective tape in particular, since the RC car and house projects both list a bunch of cool things you can do with the reflective tape — but you don’t have any spare tape to explore.

The coolest and simultaneously most annoying thing about Labo is the cardboard models. I did have an instance or two where I wanted to turn the piece in a way that apparently wasn’t allowed, which increased my swear count significantly (I’m bad at both building models and not cussing).

Some of the models rely heavily on the cardboard being in good shape — notably, the RC car won’t move properly if its legs are bent — which worries me. And the more complicated pieces, like the piano, are certain to fall apart with more than a few hours of use.

Even more, as I look around my living room, I wonder what exactly I’m supposed to do with two filing cabinet drawers’ worth of cardboard models between Labo jags. Most of my limited storage space is already taken up with plastic fishing rods, nunchucks, balance boards, cords, Amiibos, and all the other peripherals endemic to a Nintendo household. But I guess Nintendo knows how much we’ll put up with.

Above: Setting up the Labo house and its three controls.

What Labo evokes for me, more than anything, is the Wii. When that console came out and you could fish and hula-hoop and do yoga with a pair of controllers and a place to stand, it blew my mind. Labo revives that feeling of “dang, that’s nifty” by allowing you to build your own peripherals, showing you how they’re programmed, and letting you tweak and customize just about every element.

This is what I expect from Nintendo: innovative designs that make you feel clever. The company is never likely to match the sheer power or realistic rendering Sony and Microsoft push, but the level of access you get to game-making with Labo reminds me of favorites like Mario Maker, where you create your own Mario levels .OK, yes, this is an awful lot like a real-life version of the PlayStation classic LittleBigPlanet. Which my kid also loved.

Nintendo Labo Toy-Con 01 Variety Kit came out on April 20 for Nintendo Switch. We purchased our own copy for the purposes of this review.