Hearthstone’s single-player mode is becoming my favorite part of Blizzard’s digital card game. Part of this is because the competitive modes is becoming frustrating thanks to a few, superpowerful decks dominating the ranked ladder. But it’s more because Blizzard has found a winning formula for solo card-based adventures.

Hearthstone’s last expansion of 2017, Kobolds & Catacombs, introduced Dungeon Runs. The solo mode has players pick one of the game’s nine classes, start off with a weak deck, and fight computer-controlled bosses. When you win, you got to add cards to your deck. If you lost, you were done. You had to start over. The goal is to beat eight bosses, with each one more difficult than the last. I loved this mode for creating a replayable, challenging experience that still involved elements of deck-building while giving us fun cards to play with that would never be fair in a competitive environment.

Blizzard has just released a similar mode as part of Hearthstone’s latest expansion, The Witchwood. Monster Hunts follow the same formula as Dungeon Runs, but with new bosses and cards. Instead of choosing one of the game’s normal heroes, you choose from four characters designed just for the mode. 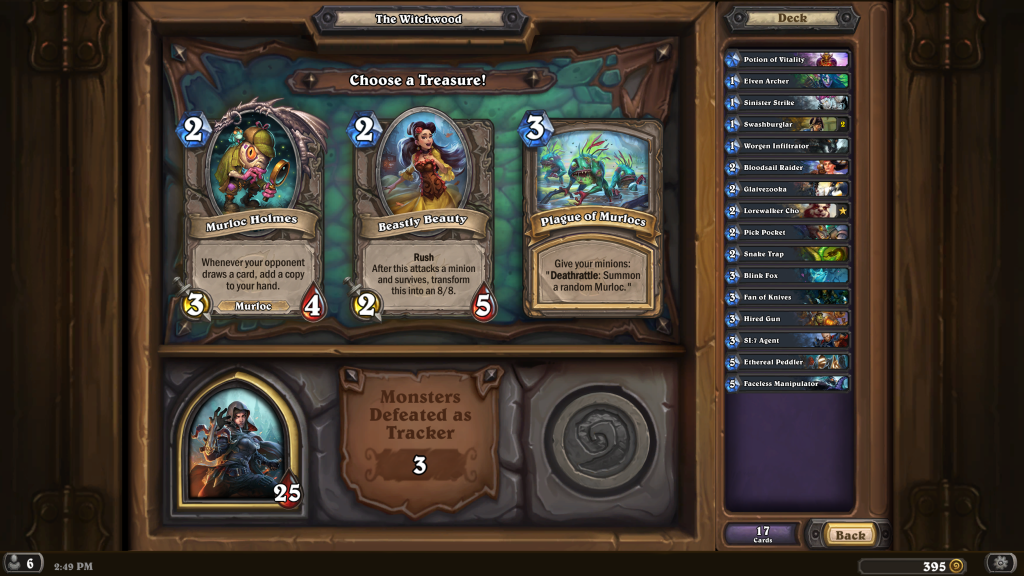 Above: Choose a card.

It’s a good way to add a twist to Dungeon Runs without messing up what makes them fun. Just having the new bosses would have made it worth trying out, but the new cards and classes make it a more captivating experience. And just like with Dungeon Runs, this mode is free. You don’t need to buy any card packs or pay to unlock anything. Every player has the experience. Buying enough card packs to stay competitive in Hearthstone’s Standard and Wild modes can be expensive. Monster Hunts gives you a way to enjoy Hearthstone without spending money.

Blizzard was also smart when it released Monster Hunts a couple of weeks after the expansion debuted. When Kobolds & Catacombs came out, I dove right into Dungeon Runs. I played so much of it that I missed out on the first couple of weeks on Standard play. That’s usually the most fun time in that mode, since people are experimenting with new decks before the meta settles.

This time, I was still able to take part in that deck-building experimentation. And just when I was getting tired of Standard, Monster Hunts comes out and strengthens my interest in Hearthstone.

Blizzard knew it had something with Dungeon Runs. I’m glad Blizzard was able to expand on the idea in the very next expansion. In fact, it may have improved on the mode. It’s too early to say for certain if Monster Hunts are better than Dungeon Runs, but I love the unique classes. They help make the experience even more different than typical Ranked play, and the new Hero Powers give you fun, new ways to mess around with cards. Above: The bosses offer fun challenges.

For example, I won my first Monster Hunt as the Tracker. With her, I could use my Hero Power to Discover a class spell played earlier in the game. I eventually added Jade Shuriken to my deck, a spell that deals 2 damage and summons a Jade Idol if you it isn’t the first card you played that turn. Jade Idols get bigger every time you play one, so I was able to keep using my Hero Power to get more Jade Shurikens and build a massive Jade army.

I’m hopeful that this Dungeon Runs mold becomes the new standard for Hearthstone’s solo content. The old Adventures were fine, but they felt limited and didn’t offer much of a reason to play them more than a couple of times. Monster Hunts are something you can enjoy for months.