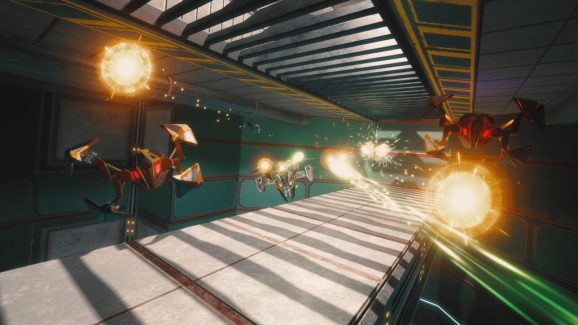 Six degrees of freedom (6DOF) shooters seem to work pretty well in VR, provided you have the stomach for them. If you’re a fan, then there’s a big release next month you should definitely be marking on your calendars.

Developer Revival Productions’ Overload is finally coming out of Early Access on May 31 and launching in full on Steam with optional support for both the Oculus Rift and HTC Vive. You may well have heard of this one; Revival is comprised of developers that worked on the original Descent, arguably the most influential 6DOF shooter out there. It’s a crowdfunded game, having raised over $300,000 all the way back in 2015.

Overload sees players fly through maze-like levels, tangling with different types of enemies. A single-player campaign includes over 15 levels, though the full launch also adds online multiplayer and a challenge mode. A level editor is planned as post-release content, too.

If you want to give it a test run before launch there’s a free demo you can download now. That supports VR, too.

On top of the PC release, Revival says a console version is also in the works for later this year. Hopefully that means we can expect PlayStation VR (PSVR) support in the PS4 version, but no official word on that just yet.