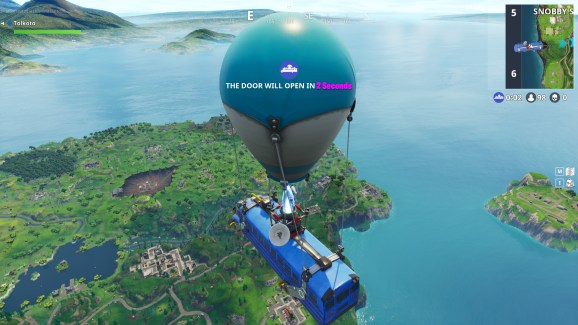 Epic Games released Fortnite’s Season 4 update today, adding new cosmetic items and gameplay changes to both the cooperative Save the World and 100-player Battle Royale modes. The update also brings some map changes for the Battle Royale mode, but Tilted Towers — a skyscraper-filled city in the center of the island — has survived.

The free-to-play Battle Royale mode turned Fortnite into a giant hit on PlayStation 4, Xbox One, PC, and mobile. Fortnite is now the biggest console free-to-play game ever. The mobile version made $15 million in a single month. Updates like Season 4 keep all of those players engaged and give them a new reason to spend money.

Epic teased Season 4 first by having a comet appear in the sky and then by having flaming rocks land on the map during games. Fans speculated that a giant meteor would take out Tilted Towers. Since that location has so much real estate, it often includes the most and best loot. Because of this, many of each games’ 100 players will flock to Tilted Towers, and the person who survives ends up with a lot of strong weapons. It’s a risky opportunity that’s unparalleled by any other location in Fortnite’s map.

Tilted Towers stands intact in Season 4. But a location right next to it, Dusty Depot, is now a crater. Dusty Depot used to have three large warehouses sitting side by side. Now only one warehouse is whole, a second is careening on a crater, and the third … well, it’s gone. That crater now houses a new military base location called Dusty Divot. You’ll find new meteor chunks there that give your player moon-like high-jumping powers for a limited time. You’ll also find smaller craters across the map, including at Tilted Towerrs.

Season 4 brings other gameplay changes, including the removal of crossbows. You can find a full list of the changes in the patch notes.