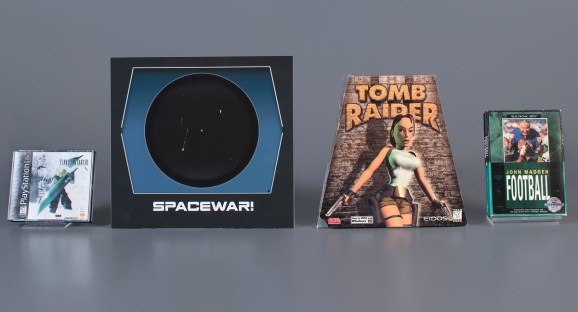 The World Video Game Hall of Fame has announced its inductees for 2018. The winners include Spacewar, John Madden Football, Tomb Raider, and Final Fantasy VII.

The four inductees span multiple decades, countries of origin, and gaming platforms, but all have significantly affected the video game industry, popular culture, and society in general.

Spacewar! came out in 1962, well before Pong popularized video games in the 1970s. Spacewar! is a space combat Steve Russell while he was at the Massachusetts Institute of Technology. As one of the first video games, it influenced the entire industry.

Eidos’ Tomb Raider introduced the iconic character Lara Croft, and it augured the era of 3D graphics in commercial video games when it came out in 1996. John Madden Football debuted in 1988 with memorable coach Madden as personality. It went on to sell more than 120 million copies and it is still a huge part of Electronic Arts’ annual releases today.

And Square’s Final Fantasy VII debuted in 1997. Its deep story and role-playing game mechanics made it a favorite among fans for years to come. The game was one of the most ambitious of its time and it cemented Sony’s PlayStation as a long-lasting game platform.

I was one of the judges this year, and I voted for Call of Duty, Minecraft, and Tomb Raider. One out of three isn’t bad. There are about 30 judges each year. The awards are given out by the Strong Museum in Rochester, New York.

The criteria for the selection are as follows: