Fortnite is in the middle of one of the most successful game updates of all time. Epic Games launched Season 4 of content for its battle royale shooter on May 1. That came after weeks of teases and conspiracy theories from everyone on YouTube, Reddit, and even my local Garlic Jim’s Pizzeria. That anticipation and excitement has now turned into spending, and Fortnite on iOS just crossed $50 million in total revenues driven by Season 4, according to intelligence firm Sensor Tower.

It took Fortnite 30 days to get to $25 million on iOS. It has now doubled that total in the last two weeks. Sensor Tower tracks behavior of millions of players to estimate downloads and spending on Android and iOS, and it saw a huge jump in activity for Fortnite alongside the release of Season 4.

“Player spending in the game on May 1 grew 293 percent, or a nearly four-times increase, versus the preceding Tuesday,” Sensor Tower mobile insights analyst Randy Nelson wrote in a blog post. “This rapid quadrupling of revenue resulted from a significant number of players laying out about $10 worth of in-game currency apiece for Fortnite’s Season 4 Battle Pass, which unlocks additional content and other perks for completing specific challenges during the season.” 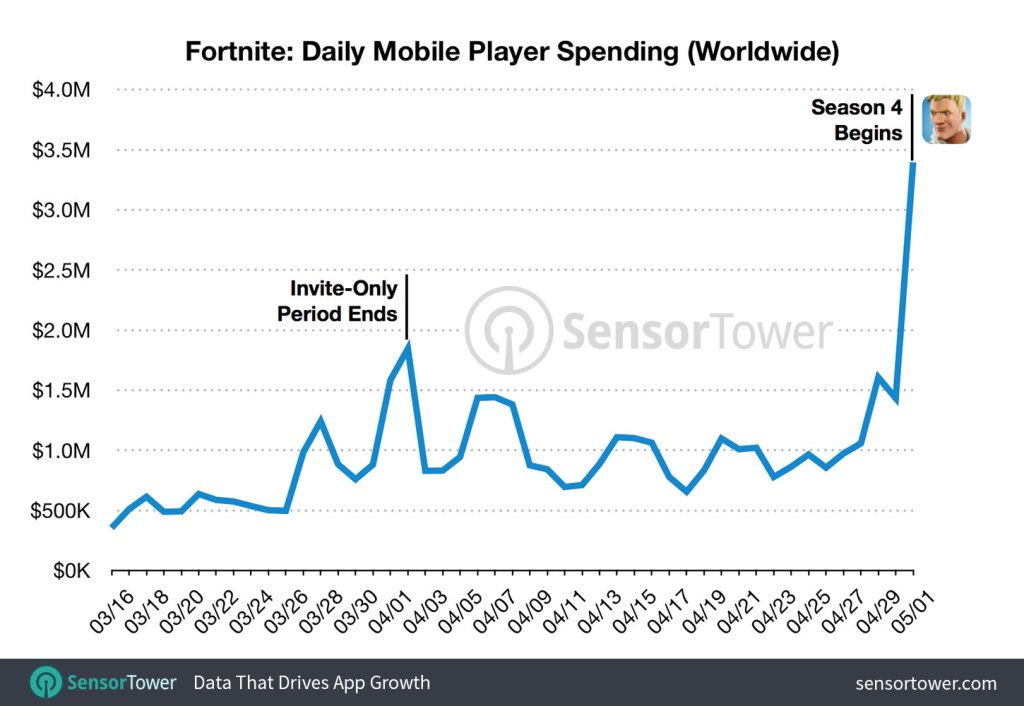 Above: Fortnite’s Season 4 event was a huge success.

Fortnite is free-to-play on PC, console, and mobile, and Epic generates revenue by selling cosmetic items as the aforementioned Battle Pass. This season pass adds a progressions system that rewards paying players with more skins and emotes for their characters. The Battle Pass also introduces challenges and other activities for players to engage in that add a meta-layer to Fortnite that gives players a sense of accomplishment even if they are losing every match.

While we can see that the increase in spending was huge on mobile, the same is likely true for the PC and console versions. And Epic earned this influx of cash by delivering a solid update that changes the game and gives players a ton to talk about. The developer is setting a tone when it comes to regular, free updates for a live-services games — especially one with such a huge audience of casual and hardcore players.