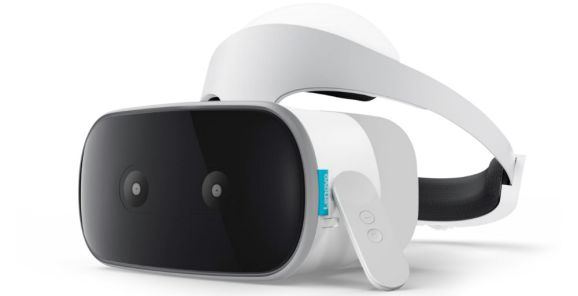 Leaning around in Oculus Go is not fun. The urge to try anyway can be strong, as what happened to me when Upload games Editor David Jagneaux was showing me photos in his virtual loft. There was a photo he had placed on the far wall I couldn’t see because his head blocked it. Facebook’s Oculus Go doesn’t register leaning movement and, because he was in Oculus Go too, David couldn’t simply lean out of the way. At best, this limitation of the $200 headset is an inconvenience, but at worst it might make some users more likely to experience simulator sickness.

The Lenovo Mirage Solo is not held back by limited head movement. The first standalone headset powered by Google’s technology offers six degrees of freedom (6DoF) for head movement. We should get our hands on the device this weekend and I’ll have first impressions up soon after, but in the meantime we dug through the reviewer’s guide for the $400 standalone and confirmed a number of features are included that are likely to represent a major step up compared with the Facebook headset.

Here’s a look at some of the other things we plan to test and compare to Oculus Go as soon as we get our hands on the headset:

Second screen viewing is a major omission at launch of Oculus Go, though the company is likely to add it. That feature, however, successfully made the jump from Daydream View to the Daydream OS included with the Mirage Solo.

This inclusion means that if you’ve got a Chromecast it should be super easy for Mirage Solo players to mirror what they see in VR to a TV nearby. This opens up lots of opportunities to introduce VR to first timers, or enjoy it together as a group.

I ended up spending around $273 after tax on Oculus Go for the 64GB version because I didn’t want to find myself limited in how much I could install on the headset. I could expect to spend around $428 for Mirage Solo with 64GB of included storage plus room for a micro SD card that supports up to 256 GB more.

For some, lack of SD card support in Oculus Go could be the deciding factor in not buying the system.

Taking screenshots and video on Oculus Go can be done by accessing a menu, and I’ve had mixed results trying to activate the feature. The reviewer’s guide for the Mirage Solo lists a simple controller shortcut to record video and take screenshots though. That’s pretty convenient.

What matters is the overall experience and we can’t speak to that until spending significant time with Mirage Solo, but the specifications outline a device that appears to be a step above Go in some respects. One exception is the Solo apparently lacks integrated audio in comparison with Oculus Go. Here’s a look at the specifications: