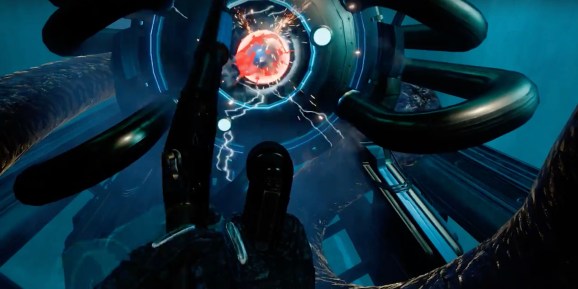 Over the past week, I heard Facebook’s Oculus VR unit talk about using sophisticated tricks to help increase immersion in virtual reality games. From moving screens that let your eyes focus on nearby objects, or locking eyes with someone else in the room, or subtle design cues such as properly reflective mirrors, developers have numerous ways to make you want to spend more real time in virtual spaces.

I’ve become so accustomed to increasingly well-designed, immersive VR that I forgot how broken experiences can be when a game hasn’t been designed or executed properly. As Oculus said, a player’s inability to focus on up-close objects means that most games have been designed for objects to be manipulated at distances — that’s just one of the precautions many developers have taken without players even realizing it.

But when I went to try the new PSVR first-person shooter Killing Floor: Incursion this week, weird glitches smashed the illusion of “being there.” Some appeared to be intentional, like blocky objects with deliberately bizarre rippling edges. But others were not, such as guns that got stuck to my hands during a knife training session, and knives that began to glitch out when I tried to rotate them for proper throwing. As my eyes struggled to focus on the knives up close, I thought of what Oculus had said about best practices for VR design — and how so little of what I was seeing seemed to reflect that.

By the time I got to the actual gameplay, my eyes and brain were exhausted from trying to deal with all of the problems during training. I had been excited by the prospect of controlling a Deadpool-like character with dual pistols and twin knives to pull out of sheathes on my back. But there were so many buttons to memorize and so many things weren’t working right visually that I bailed on the title as soon as the second glitch appeared in the first level. I just didn’t want to experience any more of what the game had to offer. And from what I’ve read online, I’m far from the only person who experienced glitches in a Killing Floor title.

A postrelease patch — the sort of thing that’s now all but inevitable in the game world, both on console and PC — isn’t going to bring me back to the title. And that’s a major problem VR as a concept has had with many people: There’s no real way to reverse a negative first impression. Some people bail on VR as a whole because they aren’t immersed properly and just see glitchy games and bad interfaces as obstructions to fun. If my first VR experience had been Killing Floor, I might never have gone back.

VR hardware vendors need to take responsibility for this. By opening digital stores to pretty much anyone, they allow some developers to ship unpolished software with the implicit promise that they’ll get around to fixing the issues later. Unless we want to experience a hard-to-reverse Atari-style crash of the nascent VR game business, that’s going to have to change.

The major VR hardware vendors need to step up and actively start policing the quality of the software they’re selling for their platforms. If they don’t, people are going to start hating VR, because the only thing worse than a bad game is one that actually gives you a headache due to glitches and poor design choices.