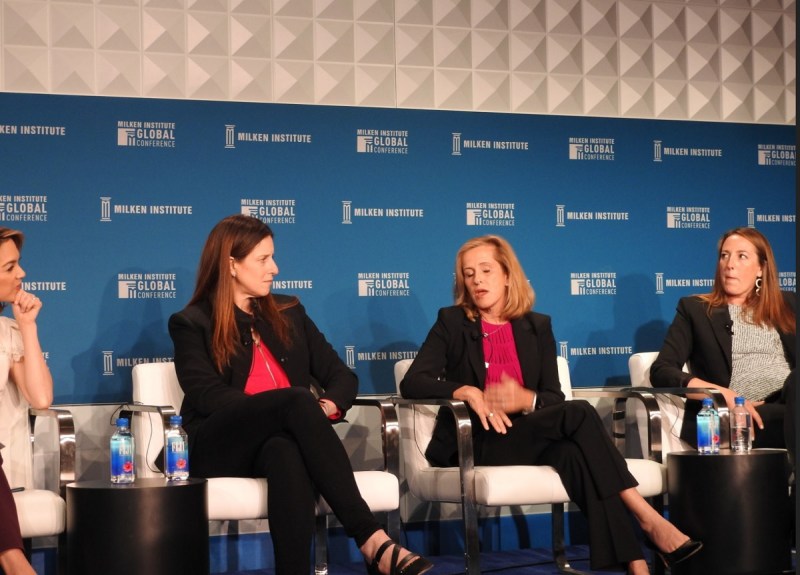 Above: Kara Nortman of Upfront Ventures (left), Elaine Paul of Hulu, and Melissa Waters of Lyft.

Chang: The feelings of anger, do we have sympathy for that?

Waters: No. Sorry. The stats show that women are 51 percent of the population. Six percent of Fortune 500 CEOs are women. When you look at women of color it’s .4 percent in CEO roles. When I think about white male backlash and the question of whether we should be caretaking that sentiment, I don’t have any sympathy for it. We’re all owning this issue. But it’s most often women of color who are on the front lines, men of color on the front lines, having to coach about this.

Paul: I’d love to build on what you said and come back to something we’ve alluded to about — often a block for women is family. If you get to a place where you’re building a family, that can suddenly become a conflict with a demanding job. It’s exacerbated in tech. That’s something I feel personally. Prior to being a CFO, I was in M&A. That was a super demanding career, and during that time, I had three children over five years. I wondered how I was going to keep that up. I felt I had to figure that out.

Now I feel great personal responsibility as a leader in my company, with my team, and in my industry, around helping companies see the way to a really critical piece of getting women in the C-suite, getting women to the top of leadership. It’s helping support them through their transition, pre-children and post-children. That’s through generous and supportive parenting leave, through personal time off, through enabling managers to be flexible with their employees as they come back from bearing children.

If we really want to change things, we need women throughout the organization and women at the top to advocate. That’s our responsibility, everyone sitting here, from where we’ve gotten, to bring that back to our companies and be advocates at the leadership table, and also in the teams we manage. We need to show examples of how we can do that, show flexibility, and show support. Again, if you’re not doing that, you end up with giving your company the opportunity to have only 50 percent of the population in leadership positions. That’s ridiculous. You want to maximize your opportunity to succeed, and that means embracing 100 percent of the population?

Lee: That’s a great point, this idea of creating a revolutionary caregiver-inclusive workplace. I’ll tell you, in the one month I’ve been at Uber, I’ve had as many young men as young women come to me and say, “I’d love to start a family soon, and I don’t know how I’m going to do that with the long hours we have to work.” If we were to move away from this Brotopia, prototypical masculine work culture, we’ll allow those men who want to be good partners, who want to be great dads — we’ll give them the opportunity to do that.

Millennial men, who make up the majority of my work force, they have a very different view of what their role is going to be with their kids. The ones who really want to be full partners in child-rearing, they feel that if they were to articulate that out loud, they would be seen as weak. If we allow for more of a female-affirming organization, you’ll see those men coming forward. You’ll see men taking full parental leave. You’ll see men asking for more flexibility. The fact is, unless we can get men asking for that same caregiver inclusion, it’ll never be perfectly okay for women to do the same thing.

Nortman: This is exactly where I was going to go. Emily, the name of your next book should be, “Why Do Men Die First?” I’ll put that in a more positive way. I really do believe you catch more bees with honey. I agree with everything everyone is saying. One of the biggest things I’ve done recently is realize, “I have this amazing woman under my nose. How can I help her more?” How can I help the woman associates at my firm become partners? That’s the most tangible thing I can do.

The flip side is, Anne-Marie Slaughter, who wrote the famous article, “Why Women Can’t Have It All,” she now talks about how there’s two sides to every person. There’s the caring side and the ambition side. The gender stereotypes are, men must sit fully in ambition and women must embrace caring. Those Venn diagrams don’t cross over. We end up having all this conversation about how you allow women to do both of those things, bring caring into an organization and still have ambition and have it be appreciated in whatever form it’s packaged. But we can also bring that over to, how do we allow men to care about caring, to act in a different way?

All the data shows that once you get an organization — I think it’s about 30 percent of any sort of difference. Let’s say it’s gender. Once you get to that point, you get men acting in less masculine, less testosterone-driven competitive ways. Everyone becomes a bit softer and more collaborative. I’m the only woman investing partner at my firm, and it’s one of the most diverse firms in the world. I have two African-American men partners, out of probably 10 total. We come from all sorts of backgrounds and nationalities. But the second we hired a woman, even just into a marketing role, I felt a bit of relief I didn’t know I needed.

Figuring out how to celebrate the men who enjoy caring and create those policies — I’d love to talk about my husband up here for 20 minutes. He’s as caring as I am. My ambition has allowed him to be more caring, even if he’s as competent and ambitious in the same job as me. Those dialogues at home, and those dialogues in the workplace, are ultimately what’s going to move us forward. It’s not just about women.

Lee: For individuals, the best thing you can do is really sit down and ask yourself for a moment, “What is my cultural orientation?” Often, when we think about how to become more inclusive, we think, “I need to learn more about other people. What are women like? How am I more inclusive to women?” But we don’t really ask ourselves, “What do I do? Am I emotionally expressive or emotionally neutral? Am I very hierarchical or very flat in my understanding of power? Do I have an internal or external control orientation?”

We don’t really know much about ourselves. We don’t realize how much of ourself we project onto other people. My norm is the right norm and everyone is deviating from my norm. The more time we spend getting to know ourselves — I know that feels a little squishy, but the more we know who we are, the more we can say, “That’s why I built this team that has these attributes. Because it’s me that’s doing it.” I know this is hard for men, because you’re raised not to be very introspective. Spend some thinking about how you behave and how your behavior impacts the people around you.

From an organizational perspective, one of the key things an organization can do is allow for all opinions to thrive. One of the challenges we see now in this Me Too environment, this hyper-D&I-focused environment, there is a fear in the organization that—I’m going to say the wrong thing, so I won’t say anything at all. In the 18 years I’ve worked in D&I, I’ve heard everything. I’ve heard every wonderful thing and every horrible thing. People say to me, “How do you not lose it when someone says something horrible?” Because if I have a judgmental reaction to what someone says, that shuts them down. They’re no longer going to engage with me. Then I can’t move them forward.

Instead, I approach them with a mind of acceptance. I say, “Tell me where you are. Now I know where you are and I can work you to where we need to be as an inclusive organization.” I would encourage all organizations — can you allow for discussion without judgment? That’s actually really hard. But those are the things I would pick out as a starting point.

McPherson: Individually, if you hire or manage people, get specific. Not just best intentions, not just being more inclusive, but very specific. I’m the first one to say this year that I brought my team at Verizon up over 50 percent. I tried to recruit a young African-American woman for six months, and she pulled out at the last minute because she had a promising relationship here in Los Angeles. But really, make an effort, and a specific effort. I want 50 percent of my team to be women. I want 50 percent of team to be diverse.

Chang: How do we feel about that kind of quota?

Lee: There’s this mythology that if you want to become more diverse, you have to diminish quality. I think that comes from people’s beliefs about what quotas are. People think, “Oh, there’s no way we can radically change the diversity profile of our work force unless we change the qualifications of the people we accept.” For me, I believe — and this is going to seem weird — but I believe in growth targets. I want to see progress year over year. But I’ll never say, “In five years you should be 50/50.”

When you put out that kind of mandate, it can lead to people doing things that they think are very productive, but end up not being very productive. I would love for us to be able to increase the hiring of women 10 percent over the next couple of years, but not have a definitive number where we should be at this representational area.

Chang: There are a lot of organizations that say, “We want to be better. We’re trying to do this. We’re focusing on it.” But the numbers aren’t changing, or they’re moving very slowly. What is the argument for a more radical approach?

McPherson: Well, the word “quota” of course is so charged. It raises all those arguments about a drop in quality. Maybe I want to redefine “quota” a bit. What I mean, though, is specific measurable goals. You make a point, Emily. 10 percent of zero is not enough. In other words, is the growth target reflective of the radical change that we need? Therefore, I’d go farther than that. That’s where I would say, we want to be 50/50 by 2020 or 2022 or whatever you think is realistic, and then measure yourself against that. It’s not easy, but we shouldn’t let ourselves off the hook by just saying we’ll do better.

The other thing I’ll say is I think we’ve breezed by backlash a bit. I don’t feel sympathy or empathy for it, but at least anecdotally, I’ve had a lot of male colleagues come by and say they’re afraid. I think we do have to have safe spaces to have the conversations about what’s appropriate and what’s not. I’ve gotten to the point where someone is saying to me, “I’d like to say, in a politically correct, safe way, that I like your shoes.” It was funny, but it’s reflective of a fear now that I think everyone is feeling.

I’ve welcomed the open conversations. That’s what we can do on an individual level. I do agree with what’s been said on the panel. The outliers are bad actors and in some cases they’ve committed crimes, but the majority of men are well-meaning. Certainly I’ve had great supporters in my career. I want to be a safe place to have a conversation and hopefully further education on both sides.