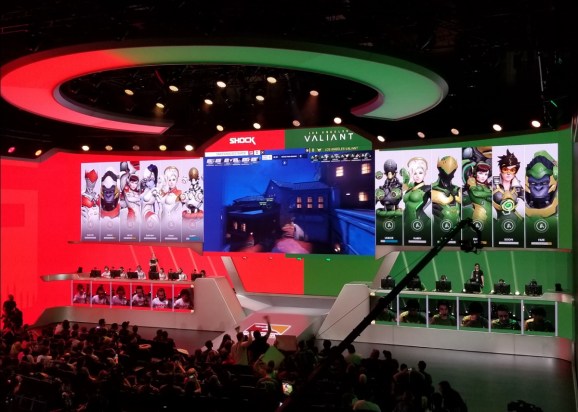 The LA Valiant and the San Francisco Shock face off in the Overwatch League.

The rapid growth of the esports industry has increased the potential for corruption, match-fixing, doping, and other undesirable or illegal activities. Increased regulation is necessary for esports to maintain its legitimacy. Here are four regulatory pushes we might see more of this year:

Regulated esports betting is the path to legitimacy

As most esports fans are underage and sportsbooks lack necessary data for setting odds, legal means to gamble on esports do not exist in the U.S. Esports betting sites, such as Unikrn and Betway, are successful overseas but are prohibited from taking bets in the U.S. To circumvent this prohibition, Americans have resorted to betting on esports using digital in-game currencies or cryptocurrencies like Bitcoin, neither of which are sufficiently regulated.

A Supreme Court decision that repeals or alters the federal ban will likely lead to legal esports betting. Esports betting sites like Unikrn and traditional sportsbooks offering esports will experience a windfall as eager gamblers flock to place bets. Expect legal esports betting to impact other aspects of the industry, as oddsmakers and bettors strive to ensure the matches they wager on are legitimate and fair.

Education and regulation to prevent match-fixing

If esports betting is legalized, match-fixing will likely be one of the first areas that leagues and tournaments crack down on. Esports is no stranger to match fixing scandals. In 2015, 21 Counter-Strike Global Offensive (CS:GO) players were banned after being accused of match-fixing. In March 2018, a professional Starcraft player and an operator of an illegal gambling site were arrested for fixing a tournament match.

The Esports Integrity Coalition (ESIC), established in 2015, promotes honesty and integrity in esports and publishes an Anti-Corruption Code, targeted at CS:GO, Dota 2, League of Legends, and Starcraft. The ESIC attempts to police match-fixing in partnership with sportsbooks, betting sites, and local state gaming authorities. If Unikrn detects a high volume of bets being placed on a heavy underdog without good reason, they will contact the ESIC to investigate the potential match-fixing. Local gaming authorities, such as the Nevada Gaming Control Board, have agreed to mutually share information with the ESIC and assist with investigations of suspicious betting patterns.

While the ESIC’s work is noble, there are far too many esports leagues and tournaments for the ESIC to regulate effectively. Thus, individual leagues, tournament operators, team owners, and game publishers must be diligent in self-policing match-fixing and educating their players about avoiding corruption.

Similar to athletes in traditional sports consuming prohibited performance-enhancing drugs to become stronger and faster, esports players gain an unfair advantage by taking drugs like Adderall and Ritalin to improve their concentration and reflexes. Similarly, to provide legitimacy, esports officials must ensure that players do not use prohibited substances.

The Electronic Sports League (ESL), the largest organizer of esports tournaments, conducts random drug-testing at their events and has partnered with the ESIC to implement the ESL’s Anti-Doping Policy. However, just as the ESIC is unable to police every event for match-fixing, ESL is similarly unable to subject every esports pro to random drug tests. To prevent doping, individual leagues, tournaments, and teams must make sure that they enforce random drug testing policies for every player. The regulations governing traditional sports leagues can provide proven templates for the effective policing of doping across the multitude of esports games and competitions.

As esports continues to grow, personal data including players’ names, nicknames, and likenesses as well as player performance data will be very valuable. As leagues, tournaments, and team owners attempt to monetize this data by licensing it to third-parties, expect controversy over the privacy and ownership rights players arguably possess in their own data.

These issues might sound familiar to fans of traditional sports as they mirror the privacy and ownership concerns many athletes have regarding biometric data that teams and leagues gather from wearable technologies. There is potential for young players to be exploited by league and team officials without the existence of regulations addressing ownership and permitted usage of the massive data generated by esports.

Aside from the ESIC, there is no national or international governing body for esports leagues. Due to the wide variety of different esports, a single governing body could not be truly effective. Thus, individual regulatory bodies should be established for each esport, such as the one regulating CS:GO players. Further, individual leagues, tournaments, and teams must ensure they have consistently enforced policies in place. As the industry continues to grow, this type of specialized regulation will help to establish legitimacy and mass appeal for the rapidly emerging sport.

A special thank you to Uriah Tangle, a pending graduate of the UCLA School of Law, for his assistance with this article.