At its I/O 2018 developer conference today, Google opened Google Play Instant to all Android game developers. As the name indicates, these are Android apps and games that can be launched immediately without having to be installed first. An instant version of Candy Crush Saga was shown off at the event.

The launch means Google Play Instant is now available on 1.2 billion devices worldwide (Android 5.0 Lollipop or higher is required). The idea is simple: remove the friction of installing an app or game. Here is how the experience looks in practice, from within the Google Play Games app:

To find an Android app to try instantly or an Android game to play instantly, head to Google Play or check out these collections: instant apps and instant games. Despite the Google Play name, these “instant” experiences can be discovered via search, messaged as links, and shared on social.

In fact, Google is hoping Google Play Instant use will spread beyond just discovery via its app store. The vision includes app and game developers including links directly on their sites to try their creations, friends inviting each other to try a game, and apps being distributed like any other URL. Once in an app or game, users can choose to install the full version if they enjoy the instant experience. Android product manager Stephanie Cuthbertson said early adopters have seen “up to 15 percent” more installs.

While Instant Apps have been available for a while, Google Play Instant expands on what Instant Apps can already do, catering specifically to game developers. The biggest change is that it includes a higher APK size limit — 10MB as opposed to the previous 4MB. Google Play Instant also supports progressive download support for executable code and game assets, in addition to letting developers use NDK and game engines with their existing tool chains. To make instant apps and games easier to build, Google has released a Unity plugin and beta integration with Cocos Creator. 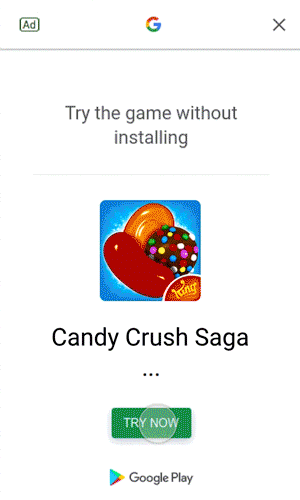 Google has also started testing Google Play Instant with AdWords, allowing people to try out games directly from ads (just like Facebook), across all the channels reached by Universal App campaigns. At I/O 2018 today, Google also revealed that its ads had driven 10 billion app install and gave a sneak peek of new ad monetization options coming for developers.