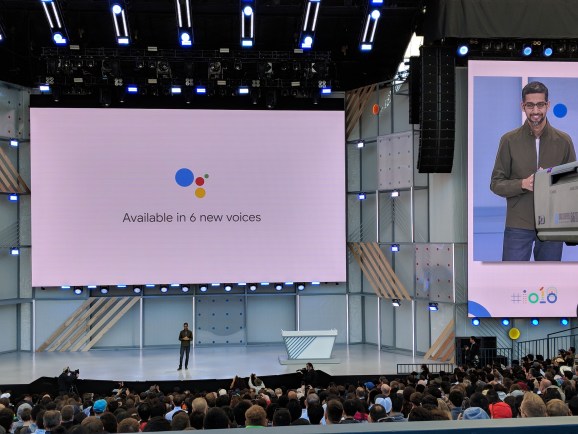 Sundar Pichai, CEO of Google, presents Google Assistant improvements at the I/O conference on May 8, 2018 in Mountain View, California.

The first day of Google’s 2018 I/O developer conference came and went, with the tech titan announcing a ton of features, products, and other future-gazing tidbits.

Artificial intelligence (AI) permeated just about every announcement Google made at the event. From Google Assistant and Gmail to Google News and Alphabet’s self-driving car unit Waymo, here’s a recap of everything announced at I/O 2018.

Google Assistant is now available on more than 500 million devices — across tablets, phones, speakers, TVs, and cars — a figure that will only increase with the news that Google Home is landing in seven more countries this year. As such, Google is doubling down on its efforts to make the virtual assistant more fun and easier to use.

Elsewhere, a new Pretty Please feature will launch later this year to encourage children to say “please” when chatting with Google Assistant.

Voice app developers will also soon be able to share their apps anywhere on the web via an Action link — when a user clicks on it, they’ll be taken directly into a developer’s app inside the Google Assistant.

We also saw new built-in intents, which are developer tools designed to improve how voice apps understand the words people use.

This is very much related to Google Assistant, but it deserves a section all to itself for the WOW factor. In an onstage demo, Google CEO Sundar Pichai demonstrated the Google Assistant making a phone call to schedule a haircut at a local salon, without any human direction.

Known as Duplex, the technology is all about carrying out natural language conversations over the phone to complete real-world tasks.

Pichai said the company has been working on this for years, and an experimental version will be made available in the coming weeks.

Google gave two of its operating systems a little bit of love at I/O this year.

First up, Google unveiled the inaugural beta of Android P — the second Android P developer preview so far — alongside a bunch of new features. But arguably more interesting than this, Google announced that Chrome OS is getting Linux support, meaning you will soon be able to run Linux apps and execute Linux commands.

The bottom line: Chromebooks are opening up to coders.

Google made a bunch of announcements related to its own apps and the Google Play store.

Google’s computer vision-powered Lens app, which was announced at last year’s I/O event, will soon be baked directly into the camera app on its own Pixel phone lineup, in addition to handsets from LG and Sony. Google Lens will also soon gain a handful of new features, such as style match, smart text selection, and real-time results.

In similar computer vision-related news, Google debuted a new app called Lookout, which helps the blind and visually impaired learn about their surroundings through audio descriptions.

Meanwhile, Google Photos is getting one-tap actions that make contextual suggestions based on machine learning technology to improve photos just after you snap them.

Elsewhere, Google News was given a major revamp, with the company announcing that it would use AI — what else? — to serve users better news from a wider range of sources. It will also now include your subscription-paywalled content directly in Google News and Search. And Google Maps is gaining a bunch of new social and augmented reality features, while Google Pay now supports event tickets and boarding passes.

On the developer side of the fence, Google announced Android Jetpack, which is basically a set of components to speed up app development, as well as a new app model for Android and revamped Google Play distribution for developers — this is ultimately designed to make Android apps modular and smaller.

Google also opened the previously announced Google Play Instant to all Android game developers, allowing them to create Android apps and games that can be launched immediately without installation.

The scope of Google’s announcements wasn’t restricted purely to its own products, however. Where its AI and machine learning are concerned, the company wants all app developers to benefit — ML Kit is a new software development kit (SDK) for adding AI to mobile apps via app development platform Firebase, which is aimed at developers for iOS and the web, as well as Android.

Google’s CEO also announced a third generation of the company’s Tensor Processing Unit (TPU) that he said will be 8 times faster than the TPU chips released last year. Google’s TPU is basically its own custom accelerators for machine learning applications, and it underpins many of Google’s own neural network computations on services such as Street View, Google Search, Google Translate, and Google Photos.

Other notable tidbits to emerge from I/O this year include ARCore 1.2., an upgraded version of Google’s augmented reality (AR) SDK for Android that ushers in three new features: Sceneform, Augmented Images, and Cloud Anchors. Interestingly, the update also brings in support for iPhones.

Google also announced that AdWords has driven more than 10 billion app installations, and in the coming months it will allow developers to surface relevant content from their apps inside ads.

Finally: Though Waymo is an Alphabet company rather than a Google subsidiary, the autonomous vehicle unit made a cameo appearance anyway. The news? Waymo is launching a self-driving car service in Phoenix later this year — without a human sitting in the driver’s seat.

If there was any lingering doubt that Google is now an AI-first company, well, I/O 2018 has pretty much cleared that up.