Last week was a big moment for esports as investors gathered at the Milken Global conference to listen to a panel I moderated on how fast the esports phenomenon — which is two decades plus in the making — has begun to grow.

No longer are we arguing about whether people will watch someone else place games. The discussion is now about how many hundreds of millions of people are doing it. The fact that this discussion was happening at the Milken event in Beverly Hills, California, shows that big money and the super rich have descended on the esports explosion.

Global esports revenues are expected grow 38 percent to $906 million in 2018 and further grow to $1.65 billion by 2021, according to a new annual report on esports by market researcher Newzoo. Esports is less than 1 percent of the revenue of the $137.9 billion global games business. But it is the shiny new thing. I’m writing stories every week about esports, much like a year or two ago I was writing every week about virtual reality investments and startups.

Our discussion ranged from the short life of video game esports as new games such as battle royale title Fortnite knocks out older games, to the investment that property owners are making in esports venues in Las Vegas, Los Angeles, and many other cities in the world. 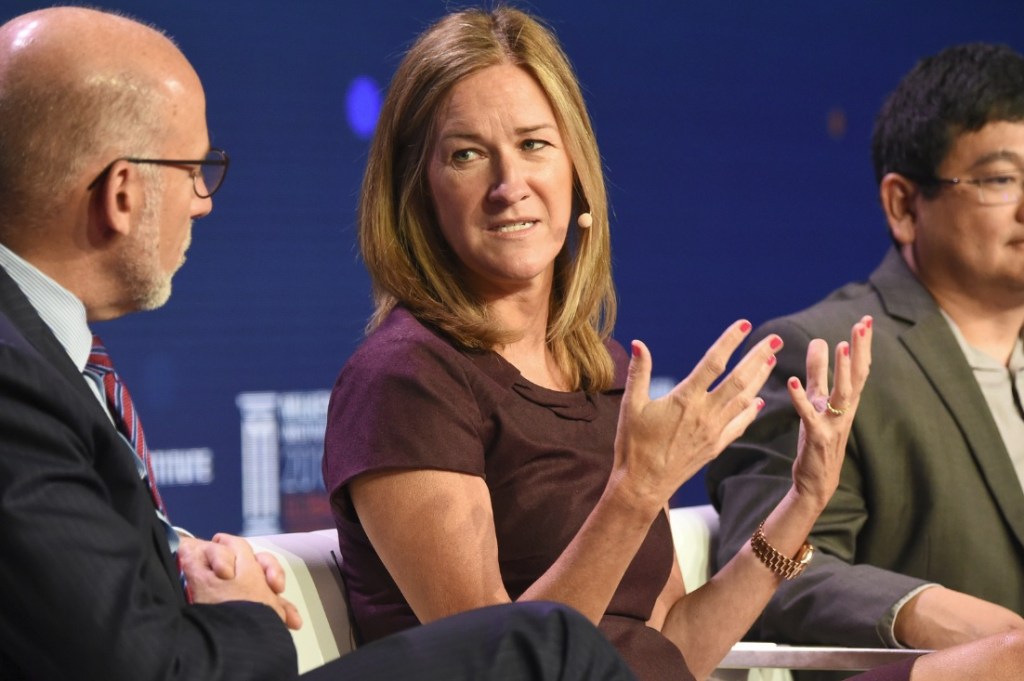 Kent Wakeford: I’m one of the co-founders and owners of an esports organization, KSV. We own a number of esports teams around the world, teams located in China, Korea, and in Los Angeles. Our teams cover most of the major esports out there — Overwatch League, League of Legends, and a number of other games like PUBG, Heroes of the Storm, and so on.

Nate Nanzer: I’m the commissioner of the Overwatch League at Activision Blizzard. That’s all this stuff over here. Overwatch League is a global professional esports league based on the game Overwatch, made by Blizzard Entertainment. We have 12 city-based teams, of which Kent is one of the owners, the Seoul Dynasty, and Steve over here is one of the owners of the Los Angeles Valiant. City-based teams that play all their matches currently at the Blizzard Arena in Los Angeles, in Burbank Studios, but in the future we’ll be moving to full home and away, so when Kent and Steve’s teams play each other that team will get played in either Seoul or L.A.

Ramon Hermann: I currently work at Tencent, with a focus on mobile esports. I’ve been in the games industry for more than 15 years now. I remember the very humble beginnings of esports. One of the first events I helped organize, the audience could probably fit in this space three times over with room to spare. Nvidia was the title sponsor, by donating one graphics card. I think the whole budget was $40,000. We’ve come a long way since.

Ann Hand: I’m the CEO of Super League Gaming. Super League was founded about three years ago on the premise that with the explosion in esports at the professional level, it was inevitable that a little league and minor league system would emerge. Think of us as a way to harness the up and coming fanbase for professional esports, but also provide an aspirational path to the pros.

Steve Cohen: I wear multiple hats, but for our purposes here I’m chief strategy officer for AEG. We’re a worldwide entertainment company, primarily in sports and live entertainment. We have about 27,000 employees around the world and operate on five continents. We have the good fortune of being a stakeholder in Immortals, and because of that, we have a meaningful stake in the L.A. Valiant, which is part of the Overwatch League. 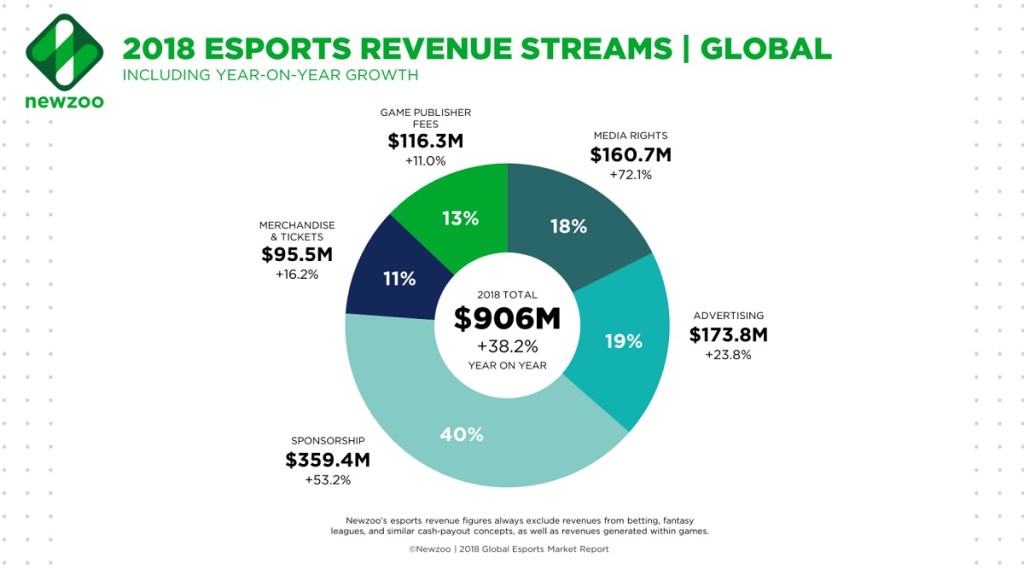 GamesBeat: Esports is expected to grow 38 percent to $906 million in 2018, according to Newzoo, and grow to $1.65 billion in 2021. Those are big numbers, but that’s actually less than one percent of the global gaming business, which is $138 billion in 2018, growing to $180 billion in 2021. You can think of that percentage as an opportunity, or as evidence of overhype. We’re talking about less than one percent of the game industry catching so much attention just in the past year. Kent, can you paint more of a picture of what kind of investment has been going on in esports? What are the layers of that investment?

Wakeford: One of the reasons why we’re all in this industry and in this sport together is a rapid increase of growth across multiple dimensions. Dean touched on revenue. Revenue growing 38 percent year over year in 2018, growing to estimates of $1.4 billion to $2.4 billion in 2020. That’s a lot of growth. More interesting is the audience size. The audience size for esports today is about 380 million people around the world, growing to about 550 million people in 2021.

To put that in perspective, the audience for esports in 2020 is expected to be greater than all other U.S. professional sports, with the exception of the NFL. That’s an interesting stat to keep in the back of your mind. Another is, there was a recent championship game played in League of Legends. That was held at the Bird’s Nest Olympic stadium in Beijing. It sold out the stadium in minutes, with 40,000 attendees. It had 60 million people watching. That’s second only to the Super Bowl, at 110 million plus.

Think about the size of this industry and the opportunity. You think about any other traditional professional sports from an investment perspective, the valuations that professional sports teams have, and there is a big white space of opportunity, which has led to a lot of capital flow into the esports space. It’s created a lot of opportunities for team owners, as well as the leagues and other game publishers. It’s a big reason why we invested, and why we continue to see more capital flowing into esports.

GamesBeat: Steve, there’s a lot of money flowing into venues, too, the places where these events are held?

Cohen: Just to riff on what was just mentioned, we’re all here in some part because of the effects of the law of numbers. That’s meaningful. I can regale you all with tales of multiple nights selling out at Mercedes-Benz in Shanghai, or in Hungary, or at Barclays, with esports events. That’s all very compelling, and it’s part of the reason we’re in the game.

But at its core, there’s also this element of the experiential. That, to us, is very important. That’s what creates the stickiness that we can drive in all sorts of directions, and make it compelling for our fanbase, for our sponsors, for our partners, for the people we collaborate with at all parts of the continuum on revenue scale. From that perspective, we’re very focused with our venues — whether they’re smaller venues in the 250-person category, or a full-blown arena or everything in between — on making sure there are customized elements that enhance the experience for everyone in the ecosystem.

That’s what’s going to make it something that amplifies the success of people that are doing it in their communities, more on a locally-based level, but it also affords the opportunity for integration and activation in a world where conventional advertising or sponsorship or whatever you want to call it has been completely disintermediated and is lacking credibility.

Nanzer: Something I’ll add, the Overwatch League — we were very thoughtful from the beginning about trying to create a league that would welcome investment. Esports, for a long time, in the old days Ramon mentioned where we had 30 people in a room on CRT monitors, a lot of that activity was grassroots, organic. The community was driving it. Publishers really viewed it as engagement marketing for games. It wasn’t viewed as a stand-alone business opportunity.

On the Overwatch League, we saw an opportunity with a new game, our first new IP in 17 years. It was an opportunity to build something from the beginning of a game’s life cycle. It was a game that was really well-suited to team sports, a 6v6 game. We saw, through events we do like BlizzCon, which is sort of the Super Bowl of Blizzard esports — it’s in Anaheim every November. We sell 25,000 tickets at $200 each in about six seconds, with 90,000 people in the queue trying to buy them. We see incredible engagement with our events. We know there’s something powerful about experiencing esports live.

In the way that I was never a soccer fan until I went to a Premier League game in London — I was like, “Oh, I get it now” — it’s the same with esports. It’s competition. It’s more fun to watch competition when you’re there and you’re connected to other fans and you have a shared experience. We saw an opportunity to bring that to more fans around the world by geo-locating the teams, and also opening up investment opportunities for people like Kent and Steve and others, to really bring them along as partners in building a league and making sure that the league is driving significant revenue for the teams, while the teams have opportunities to create new revenue streams.

We’ve been thoughtful about how we create an esports league that’s welcoming to investment. I think you’re seeing that more and more across the industry as well. 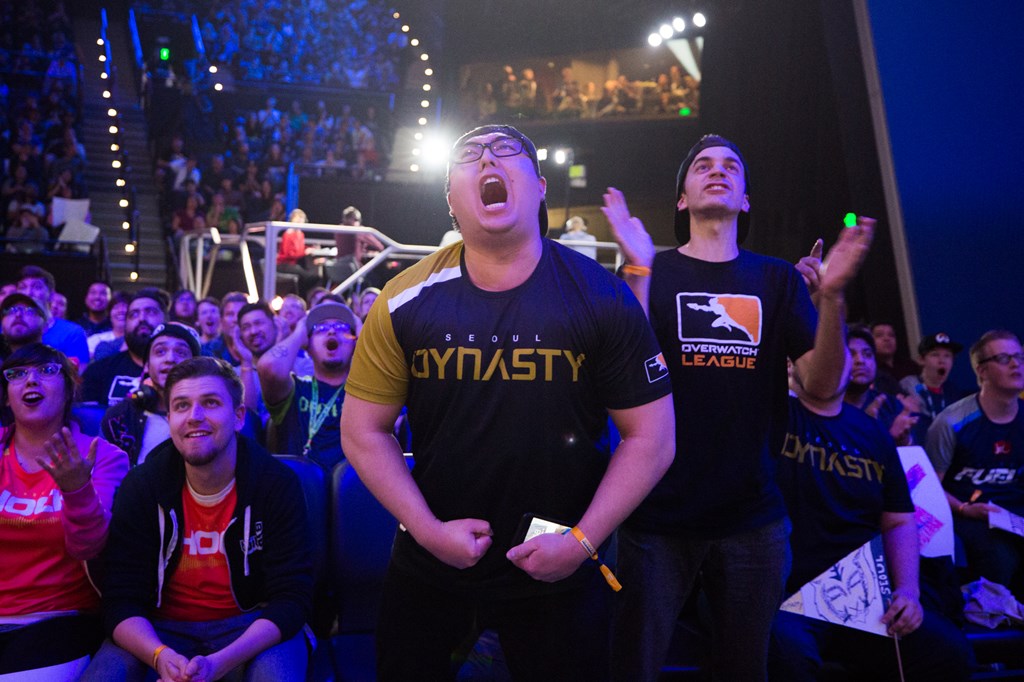 GamesBeat: We should point out that before this happened, the question was always there: “Why would anybody want to watch a video game when they could play it?” Then we had Twitch come along. Twitch is now well-known. About 150 million people watch live streams of people playing games and doing other things. That got established. It had to happen before something like the Overwatch League became possible.