Audience: How would you suggest that companies looking to sponsor and form partnerships in the esports world interact with teams, leagues, and other organizations?

Nanzer: The keyboard, the mouse, the headset, this is the bat, the glove, the basketball shoes of esports. This is performance equipment. Every player has their preference around that. It’s always been amazing to me that we haven’t yet gotten to the point – I think we’ll get there very soon – Kent has a very famous player on his team named Ryujehong. There should be a Ryujehong pro model mouse that I can go buy. If I’m a kid and I look up to him, I want to use the same gear my favorite pro player uses. I should be able to go buy the mouse.

I think we’re going to rapidly get there, both through folks doing deals with individual teams and individual teams, and at the league level. Something that Steve touched on — we own the ball. From a publisher perspective, a league perspective, that you can’t do in traditional sports. You couldn’t go do a basketball shoe deal for every player in the NBA. We can do things like that in esports. The players are going to start to become stars. They already are for those of us in the community, but they’re going to start to break out. That’s where you’re going to start to see–in the same way I can go buy Kyrie Irving’s shoe, I want to go buy Ryujehong’s mouse.

Hand: We just, a few weeks ago, announced a multi-year partnership with Logitech. What we hold in common at the highest brand mission point of view with their CEO and their head of gaming business is this belief that there should emerge a legitimate path to the pros. We think that one of the best ways to identify who a competitive gamer is — we have 2.6 billion gamers in the world. How many of those people identify as competitive? Well, it probably means you’ve invested in your peripherals. We think that’s a common way to hone in on who that audience is and how to start to provide different experiences for them.

Audience: How is the ecosystem incentivized to work together? Can you give us an update on Overwatch in that regard? Also, there’s a fear that publishers are going to be able to own most of the profits in this business. Obviously you can’t operate without permission from Blizzard and other publishers. 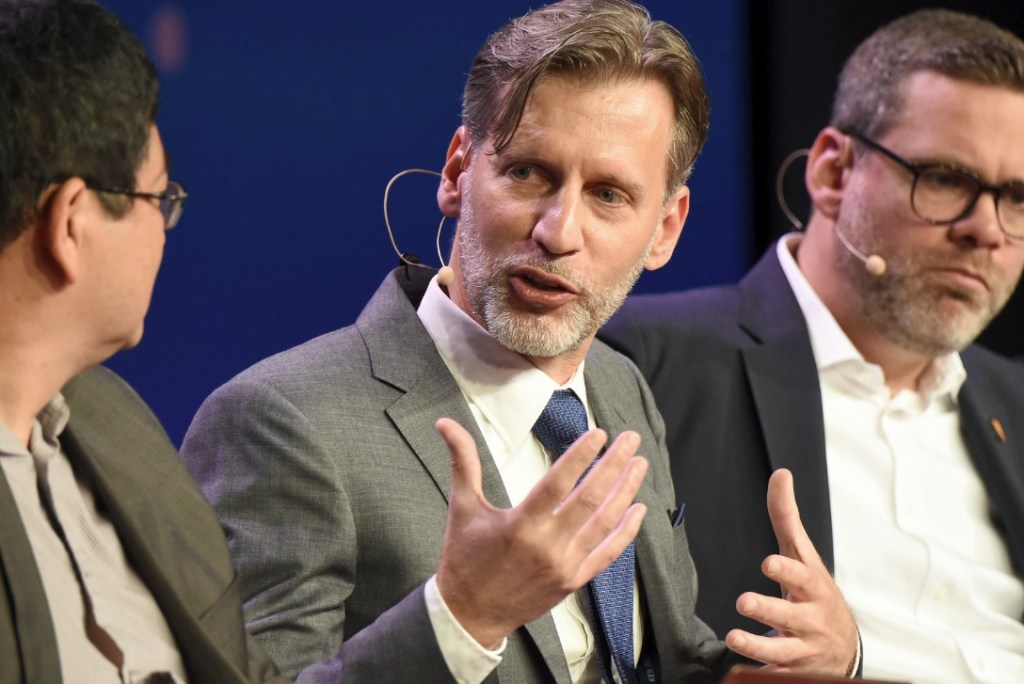 Nanzer: From our perspective, it’s important to set up a clear path to pro. There’s a team on my team that’s called the “path to pro” team. When you think about that ecosystem, it all starts in the game client, people playing Overwatch at home in competitive play. We want to make sure we give people a jumping-off point. If you decide, “I’m going to get good, I’m going to take the next step,” you know the steps you need to take to be a pro gamer. We’re trying to talk about how to set that up.

From an ecosystem perspective, we still work with third parties. We do events. There are hundreds of Overwatch events happening around the world that most people don’t know about. Things like a small four-team tournament in Belgium that takes place during a game conference. We view anyone who’s participating in competitive Overwatch at any level — we think that’s a future fan of the Overwatch League, a future core fan. We want to do everything we can from an ecosystem perspective to incentivize players to take the next step, play in the open division in the game client, get good enough, and make it to Overwatch Contenders, our regional minor leagues that we run in seven or eight regions around the world. If you get good enough, you can get signed by one of the Overwatch League teams.

I think we’ve done a good job so far of incentivizing players to participate. There’s prizing at all levels. It ramps up the higher you get up the ladder. We can’t expect someone to work a full-time job and also have enough time to become a pro gamer. Many of our Overwatch League teams also have academy teams, where they have players who aren’t old enough to be on the Overwatch League team or players they’re developing.

We think we’re in the first pitch of the first inning in terms of developing that ecosystem, but down the road, all the opportunity you see in football, basketball, baseball, soccer, it’s going to exist not just in esports broadly, but in all esports generally. Esports is not a sport. Overwatch is a sport. League of Legends is a sport. Hearthstone is a sport. All of the individual games are sports.

Hand: Obviously, with publishers, they want to get more people playing their games and get them playing longer. Microsoft owns Minecraft. We’ve wrapped a kind of competitive team layer around it. It’s not a natural esport, obviously. But in doing so, we’ve created a premium experience that gets people to play the game longer and in a different, more heightened, competitive way. We were very careful with that brand out of the gate, because we knew Microsoft would come knocking. It was January 7, 2016 when I got a cease and desist letter from them.

We give out scholarships around tournaments. We make it about positive, inclusive gameplay. When it came to Riot with League of Legends, we again had to prove that we were adding a premium experience. The ranked players, their power users, were calling for their version of the LCS. “If you want me to keep investing the hours I’m investing online, I want a new way to participate.”

But another interesting stat, we just ran an event on Saturday for the TriBeCa Film Festival. It was a borough-versus-borough competition. The New York Excelsior guys came out, which is great. About 20 percent of the participants for League of Legends were women. That’s pretty significant. That’s a game that classically, because of the anonymity online, has a lot of toxicity. I think a lot of times the publishers see us, and rightfully so, as another extension of their local marketing arm, introducing new audiences and creating a way for them to play the game in a more accessible environment.

Audience: How do you see marketers fitting into this landscape? When it comes to brands and advertising, how do you find the right approach? You also mention toxicity. Some brands might not want to be associated with certain games. I’d love to hear more about your experience and best practices. 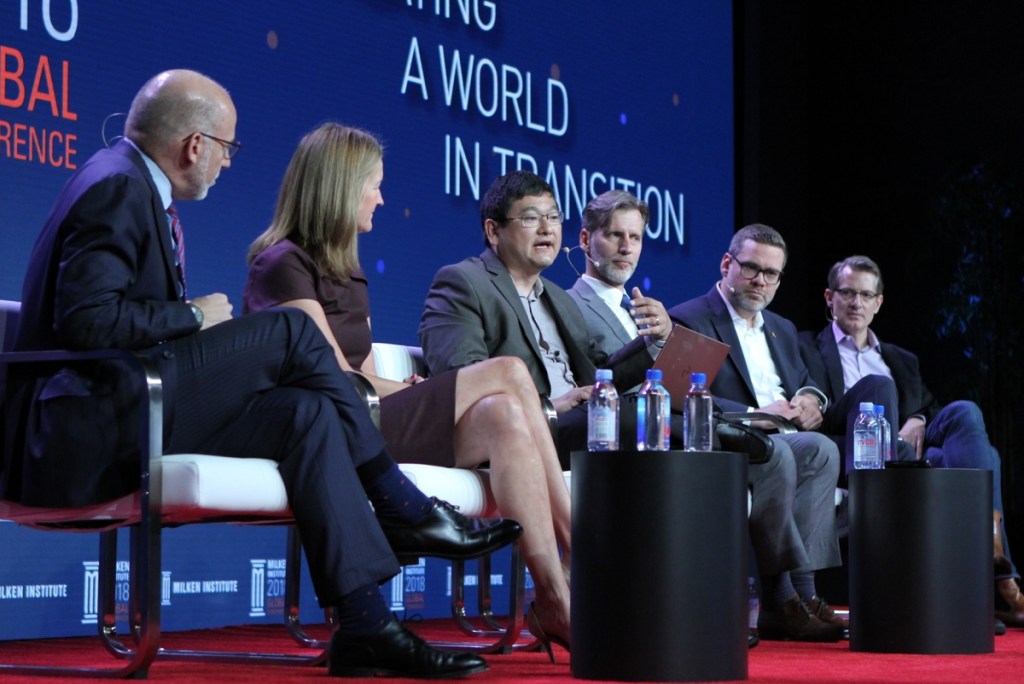 Hand: The nice thing about our mainstream, everyday competitive gamer approach is it does allow a lot of non-endemics that have been sitting on the edge — they want to get closer to gamers, but they don’t know how. It’s a safe entry point. Hence our relationship with Mattel and Hot Wheels, and I mentioned Nickelodeon earlier.

We hope that what we’re doing is creating that first entry point that dips their toe into the water as far as esports, and then they find a natural way to grow into the professional level, which is more unknown to them. I had dinner last night with the head of Nestle North America, talking about the ways we can bring some of their brands in. I hope we’re doing something good by giving a counterweight opportunity for brands that are on the edge.

Wakeford: When we think about the audience for esports, a large part of it is this millennial audience. It’s a huge audience. When you think about their entertainment consumption habits, they’re very fragmented. They use ad blockers. They watch things on their phone. They’re always on social media. It’s a hard demographic to go after. But it’s a very lucrative and important demographic for many major brands out there.

Now you have esports. You have what they play, what they watch, and what they talk about. You have the ability to be part of their life and their experience. Esports becomes this gateway to tapping into a very key demographic. What you’re starting to see is major brands moving into the esports market. It’s a consistent and regular movement.

For the brands, it’s the best possible activation, because they get in front of our audience in an authentic way. They’re attributed with creating this content that makes the experience as an Overwatch League fan even better. That’s how we’ve been focusing on bringing brands in, really sitting down with the brand, understanding their objectives, and figuring out a way we can activate authentically and create content for our fans that improves their overall experience and results in a great experience for the brand.