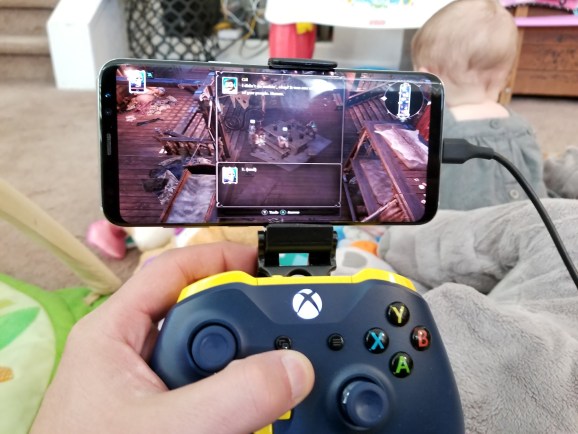 I got a Nentando Swotch.

Valve Software is introducing a way to access your Steam library through your iOS or Android device. The company, which owns and operates the Steam PC game-distribution platform and community, is launching the Steam Link app on the App Store and Google Play market the week of May 21. Like the Steam Link box, this app will beam games from your PC to a separate device, but the app does not need dedicated hardware connected to phone or tablet to work.

The Steam Link app is free and works on 5Ghz Wi-Fi networks, which can maintain the speed necessary for smooth video. You can also connect a gamepad to your device — like a Steam Controller — to have a console-like input experience. This is something that should enable people to keep playing games even when they can’t sit down at a desktop alone in their office (hey, that sounds familiar).

I’ll go hands on with the Steam Link app as soon as I can, and I’m looking forward to see if it has touchscreen control. This seems like an awesome way to play something like Into The Breach on my couch on a tablet without having to connect a DualShock 4.

Of course, this is not the first app to enable something like this. Nvidia has had its own in-home streaming solution for its Android devices as long as you are using one of its GPUs on your desktop. And fans have even modded that Nvida tech into the Moonlight app, which enables you to stream games from your PC even if you don’t use an Nvidia Android device. I wrote about while playing Divinity: Original Sin II, a role-playing game that’s on PC but not mobile.

I’ve used Moonlight a lot, and I think it’s a great way to play PC games anywhere in your home. It’s especially well done now that Steam works so well with almost any gamepad. I bought a mount to connect my phone to the top of my Bluetooth-capable Xbox One controller, and it has provided me with a way to play games that I otherwise wouldn’t have time for.

With Valve officially supporting this, though, the experience should only improve.

Valve also announced the Steam Video app, which will enable people to watch their video library on their Android and iOS devices. Valve has started selling more movies and television shows through Steam, and this app will expand how it can deliver that content to customers.

The Steam Video app will launch this summer.

Correction: This story originally said the Steam Link app would debut the week of May 13, but that was an error in the original press release. Valve has since updated the release to the week of May 21.