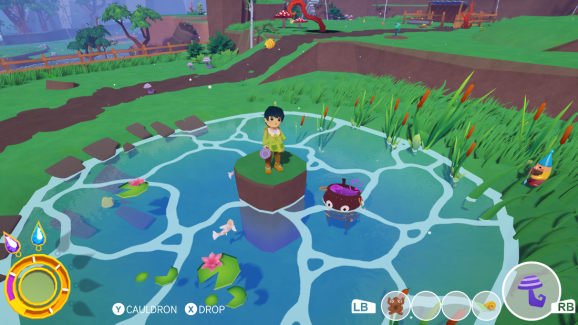 Two days before commencement at the University of Southern California, the campus was buzzing with energy, not least of which was because of the first-ever USC Games Expo. Though the school’s Interactive Media and Games Division has previously hosted a demo day, this is the first time it has teamed up with the School of Engineering on one big festival to show off the games developed in both their programs.

Over 80 games by USC students and alumni were on display, and over 1,000 people who registered for the free event, which mobile developer Jam City sponsored. It felt almost more like a party than a demo day — a DJ in the courtyard steadily churned through a playlist of dance hits and remixes of pop songs while people helped themselves to drinks and finger food served buffet style. One table was handing out ice cream and popsicles. Some people brought their kids.

Along with the families that showed up, industry folks were in attendance. And though the atmosphere was festive, the students were ready to handle business.

According to Danny Bilson, the games program is focused on preparing students to enter the industry. He’s the chair of the Interactive Media and Games Division at USC, and he also leads the Advanced Game Project (AGP) program, which is a two-semester class where select students are heads-down developing a full game. Before he joined USC, he was an executive at Electronic Arts and THQ.

“In the School of Cinematic Arts, in the last couple of years, we’ve introduced marketing for games,” said Bilson in an interview with GamesBeat. “If you understand marketing, it affects you even with your ideas for a game. If you understand that, it lets you be more thoughtful and gives you some direction in how to think about your game. We’ve been teaching that this year the most. Next year even more. Jim Huntley, one of the key members who put this show together, was a marketing vice president of mine at THQ. He’s here teaching marketing, monetization, positioning your game creatively to our students, officially now. That’s a big piece of game development. How are you going to introduce it to the users?”

In previous years, USC only demoed the six or seven AGP projects at the end of their yearlong incubation period. These highly polished games still got a spotlight this year as the teams took the stage during the keynote speech to introduce their projects and show off some gameplay. And they’re used to pitching their ideas — in order to get accepted into AGP, they had to present their games.

This year’s AGP games featured a lot of variety. One Hand Clapping, for instance, is a musical game that requires the player to sing into a microphone to solve puzzles. Meanwhile, the gravity-defying multiplayer brawler Wavebent demoed its high-speed battles between terraforming robots that can pound the ground and create shockwaves throughout its arena. VR title Sky Command is also all about the action — it’s a pulse-pounding co-op virtual reality title that’s designed specifically for arcades. Kaisuo offered a calmer VR experience, asking players to “think inside the box” and solve puzzle boxes in a meditative space.

On the quirkier side, Friendshrimp’s team demoed its tongue-in-cheek game based on the real-life punch-happy mantis shrimp. Wildbrew showed off its adorable potions-based puzzle adventure game, and Way of the Wolf put the emphasis on stealth as players sneak-attack robots with the help of an AI companion wolf. And Catastropieces took the idea of happy accidents and turned it into a physics game that tasks people with building Rube Goldberg machines to create pieces of art.

Even if students aren’t in the AGP class, Bilson says that the program features classes designed to jumpstart their careers. Finish and Polish, for instance, helps students set up crowdfunding campaigns on Kickstarter. The program will also get a class on designing multiplayer online battle arena games, to keep up with the popularity of that particular genre.

“The industry is advancing, and the answer is, yes, we have to pay very careful attention to that and set up classes to keep our students prepared, so when they leave here they’re ready to go to studios. That’s incredibly important to us,” said Bilson. “As a matter of fact, we were just talking about hiring some more faculty who have deep experience in running live games and free-to-play games, those monetization loops. We’re headed in that direction. What we do at this school, it’s always about professionals teaching students how to be professionals.”

I interviewed a few of the developers who were showcasing their games last night (those articles will be out in the coming week), and one thing is really clear. If the quality of the games at the expo is any indication, then USC’s students are more than ready to take on the challenge of a career in the games industry.