It’s easy to see similarities in Throughline Games’ narrative platformer Forgotton Anne to films from the Japanese animation house Studio Ghibli. Its hand-drawn art style and strong-willed protagonist clearly take inspiration from master animator and Ghibli cofounder Hayao Miyazaki and demand comparisons to movies like Spirited Away and Howl’s Moving Castle (based off the excellent Diana Wynn Jones novel of the same name).

But just because it takes inspiration from Ghibli doesn’t mean it’s derivative. This is a nervy adventure that commits to the idea of dark fantasy, and it impressed me with its world and the tough decisions it forces you to make.

Forgotton Anne is the latest game to come from Square Enix Collective, the publisher’s effort to support independent titles. I played it on PC, but it will also launch on Xbox One and PlayStation 4 next week on May 15. 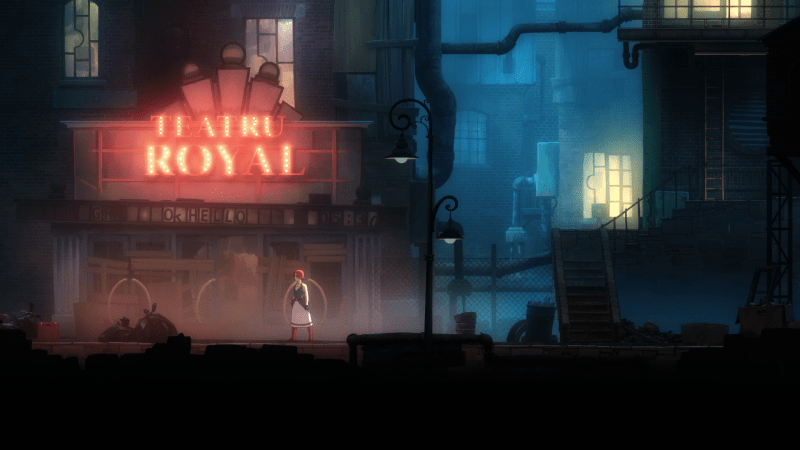 Above: Enforcer Anne, hot on the trails of the rebel force.

Forgotton Anne is stunning. The way Anne moves, the detailed environments, and the warm glow of lantern light all make you feel as though you’re playing a hand-drawn movie. Rich colors also fill the world — often blues and greens that lend a kind of underwater dreaminess to the entire affair.

It suits the dreary atmosphere: Anne and her protector, Master Bonku, are the only humans in the Forgotten Realm, a place where things go when people no longer remember them. Bonku runs the whole operation while Anne acts as a one-woman police force. She’s known as the Enforcer, and the two of them keep the peace for the world’s Forgotlings, previously inanimate objects like socks and old gramophones that have been brought to life by an energy called Anima when they entered this place. Bonku is nearing completion of the Ether Bridge, which will enable everyone to get back to the “real world,” but a group of rebels threaten to ruin everything.

Of course, nothing is as it seems, and as Anne traverses the world and interacts with its citizens, she begins to unravel the truth. The main cast isn’t very large, but everyone you encounter has a personality. Everyone is charmingly voice-acted, from the rakish Fig (a mannequin who’s the rebel leader) to the self-possessed Anne. Many of them are memorable, like the police chief Magnum, who’s a talking gun adorned with a police cap and has an outsize amount of admiration for Anne.

As its story unfolds, Forgotton Anne feels like a wonderfully animated fairy tale. Its world gives off sorta steampunk vibe, and though it takes its cue from Ghibli, it’s entirely its own thing.

A story that commits Above: The lighting effects in Forgotton Anne contribute to its dreamy atmosphere.

The story is predictable in a way. After all, when have the rebels ever been the bad guys? Everyone knows that you’re going to be in for a terrible time if you side with the Empire. As Anne doggedly pursues the renegade Forgotlings, she gradually learns why they object to Bonku’s rule over the realm. Along the way, she’s presented with opportunities where she can either wield her power as Enforcer or act with compassion.

The power dynamic between Anne and the Forgotlings is pronounced. She’s armed with technology that enables her to “distill” the Forgotlings’ Anima — in other words, killing them instantly. It can be an easy way to get what she wants, but depending how you play, you may decide not to use this ability.

But even though the story makes good use of tropes, it really commits to seeing through the consequences of Anne’s and Bonku’s past actions. As far as I can tell, Anne’s story has two possible endings. Both are impressively gutsy and surprised me. For the better part of the game, I thought it was pleasant if not entirely original. The ending was enough to elevate it to something that’s willing to let its characters do what they need to do. Above: Many of the Forgotlings talk longingly about their owners.

Anne and Bonku are the main characters on stage, along with rebel leader Fig. The other characters flit in and out of the story (some like Magnum play a bigger part), but for the most part, they’re not too important. That doesn’t mean they’re not present.

Forgotton Anne is a puzzle-platformer, and as you hop, float, and run through the city, you hear little snippets of dialogue from its citizens. It makes you realize that Anne has developed a reputation that’s not always flattering. Some of the people are afraid of her, others are disgusted by her position of authority. Occasionally, you hear a sympathetic comment.

Even though you don’t spend that much time with the Forgotlings you meet, the writing, voice-acting, and art combined make most of them likable and moreover produces a twinge of guilt when Anne has to make a tough choice. 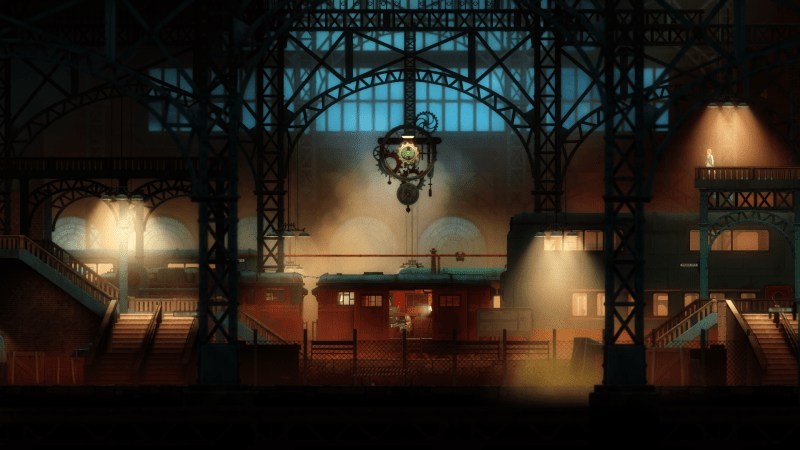 Though you do have to make some difficult decisions, this aspect of the game only emerges occasionally. And by the time you get to the end, you’re only taken to task for a few of the choices that you’ve made.

The main argument you can make for being cruel or authoritarian with the Forgotlings is that they’re not people but rather objects like lamps, blankets, and old boots. If you truly believe that, then it seems the natural choice is to cast aside their complaints and dismiss their concerns. But if you opt to play a kinder, gentler Anne — one who recognizes that, for whatever reason, these Forgotlings have become sentient living beings — then the choice is also clear.

These two ways of approaching the game can make it feel black and white. It’s only when it puts your attitude at odds with what you must do that it feels challenging. For instance, in one section of the game, I had to get past a gate, but a Forgotling wouldn’t let me go. If I really think that they’re a person, then should I distill and basically murder them? What does that say about my character?

It does feel like Forgotton Anne has one of two inevitable conclusions, but I wish that getting there took a few more twists and turns. 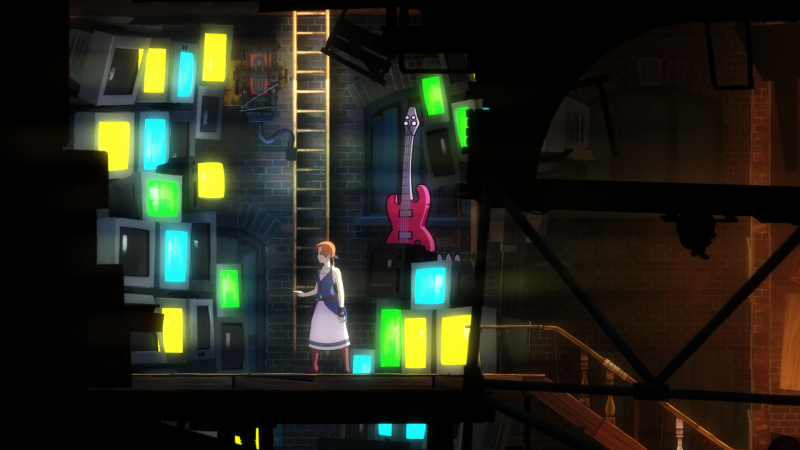 Above: Colorful, yet a little postapocalyptic.

Forgotton Anne is beautifully animated, but unfortunately, its controls are sluggish and inexact. Whenever Anne sprints, it takes an extra second for her to come to a stop because she has to complete her run animation. Sometimes climbing up ladders or through vents can feel tedious, as she meticulously puts one hand before the other.

Fortunately, the puzzles aren’t difficult, so this doesn’t get too much in the way of the gameplay. And the scenery is certainly nice to look at. But still, it can feel a tad frustrating.

I’ll admit that, like a lot of kids, I was obsessed with Studio Ghibli movies. So when I started Forgotton Anne, I was ready to experience what I thought would be a straightforward homage to those films. What I got instead is a game that knows its roots but is willing to try something new as well. It takes the darker aspects of Spirited Away — because, let’s be honest, it’s kind of terrifying to see your parents transform into animals and then find yourself whisked away to another world with no way home — and explores them. And it does so with a lot of style.

I only have two real gripes. First, I don’t really understand why “Forgotton” has to be spelled with an “o” instead of an “e.” That’s a minor (half-joking) complaint, really. But a much bigger one is that I wish that Forgotton Anne had better controls.

If you’re looking for really precise platforming, this probably isn’t the game for you. But if you’re looking for a narrative adventure with some light puzzle-solving and a lot of eye candy, then you should join Anne on her journey through the Forgotten Realm.

Forgotton Anne is out May 15 on PC, Xbox One, and PlayStation 4. Publisher Square Enix Collective gave GamesBeat a Steam PC digital code for the purposes of this review.