Sony extends its grip on the TV ad market for the seventh month, and a new name appears in the top 5 spenders.

GamesBeat has partnered with iSpot.tv, the real-time TV ad measurement company with attention and conversion analytics from more than eight million smart TVs, to bring you a monthly report on how gaming brands are spending. The results below are for the top five gaming industry brands in April, ranked by estimated national TV ad spend. 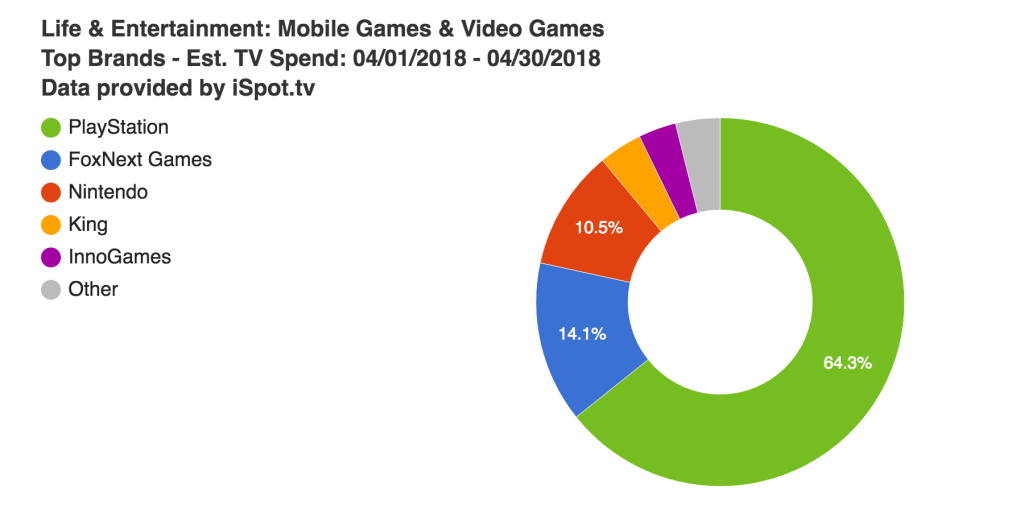 Television advertising spend for the gaming industry was basically flat from March to April, with just a slight uptick from March’s $31.7 million to an estimated $31.8 million. In total, 17 brands aired 60 commercials over 8,900 times, generating 1.7 billion TV ad impressions.

Once again PlayStation was on top, accounting for nearly two-thirds of the industry’s total outlay. It spent an estimated $20.5 million on airing 16 spots that ran over 2,200 times and resulted in 801.9 million impressions. PlayStation’s God of War spot “A Greater Purpose” had the biggest placement budget, an estimated $11.1 million. The brand prioritized spend across networks including AMC, Fox, and Comedy Central, and during programming such as NBA basketball, The Walking Dead, and South Park.

Sony has led this ad spend since August, when Nintendo won the month.

In second place is chart newcomer FoxNext Games with an estimated spend of $4.5 million on placing just two commercials that aired over 1,000 times and generated 196.3 million impressions. It’s the first time that FoxNext has appeared in the top 5. “Assemble Your Squad” was by far the most-aired spot, accounting for nearly all of FoxNext’s spend. Fox, FX, and FXX were among the networks that FoxNext prioritized, while Lethal Weapon, Family Guy, and The Simpsons were among the top shows.

Nintendo takes third place, spending an estimated $3.4 million to place 17 ads that aired over 1,300 times and generated 167.5 million TV ad impressions. The commercial with the highest spend (est. $1.3 million) was “Nintendo Labo Variety Kit: Make, Play and Discover.” The company allocated budget across networks including Nick, Nick Toons, and Teen Nick, and during shows such as SpongeBob SquarePants, The Voice, and The Loud House.

King is at No. 4 with an estimated spend of $1.2 million on placing four spots, all for Candy Crush, that aired over 2,300 times and generated 356.8 million impressions. King put the biggest push (est. $1.1 million) behind “Candy Crush Saga: Fearless Cat! Get That Sweet Feeling!” ABC, CBS, and TNT were three of the networks King prioritized, while The Chew, The View, and General Hospital were among the top shows.

Fifth place goes to InnoGames with an estimated spend of $1.1 million on placing four spots that ran 1,100 times, resulting in 112 million TV ad impressions. “Develop Your City” was the spot with the biggest outlay (est. $413,597). The brand prioritized spend across networks such as FX, Syfy, and truTV, and during programming including Legion, The Americans, and the Red Bull Air Race World Series.