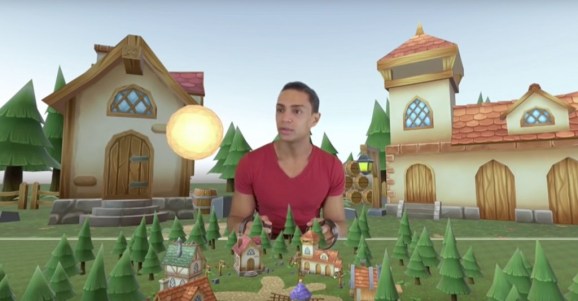 Unity had some big VR news to share at its Unite Tokyo conference earlier this week.

According to tweets from the event, which wasn’t livestreamed, the engine maker showcased the latest progress with its Carte Blanche VR creation suite during the show. Not only that, but Unity’s Timoni West confirmed the platform will release to the public this October.

For those that don’t know, Carte Blanche is different to Unity’s Editor VR, which lets developers jump into their games through headsets to edit scenes and use specialized third-party tools. The hope is that, one day, Editor VR will let experienced Unity developers create even better experiences while a new wave of developers are attracted to the platform. Carte Blanche, meanwhile, wants to get everyone creating in VR regardless of skillset.

To do this, the platform presents a simplified UI with a wide range of pre-made assets. As can be seen in images of West’s demo, in which the developer appeared to make a cake-themed world, the user jumps into VR and then picks up cards the represent objects like platforms to stand on. These objects can then easily be placed in the game world, represented on a board in front of the user. As they build, the user can jump into these worlds at human scale to play through their levels and test them out.

The result is an accessible world-building system that might not give creators a huge amount of personalization in terms of look and feel but still gets them making VR content faster than they ever have before.

It’s great to hear that Carte Blanche is finally nearing release, though there’s still much to learn about the platform, like how we’ll share our experiences and implement different kinds of mechanics. Ultimately, Unity CEO John Riccitiello sees the platform as something similar to Sony’s LittleBigPlanet franchise in terms of accessibility, though also thinks that truly unique accessible VR creation may need both Editor VR and Carte Blanche to hand.

Unite comes to Berlin in June, so it’s possible we’ll hear more about the platform around then. As for release, we wouldn’t be surprised if the platform launched during Unite’s L.A. conference in late October.

Update, 8:56 a.m. Pacific on May 13: Unity has been in touch to clarify a few things about its Carte Blanche showcase, which actually was livestreamed on Unity Japan’s Twitch account. The company specified that Carte Blanche is currently an ‘experimental prototype’ and not a platform, and will not feature the ability to share experiences.