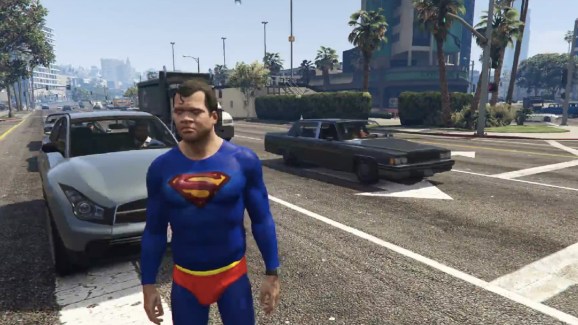 The Superman of video game sales continues to dominate.

Grand Theft Auto V has generated more revenue than any movie ever, and the first three months of 2018 expanded its lead. GTA V surpassed 95 million copies sold since debuting in 2013, and 5 million of those sales came in the three-month period ending March 31. At this rate, the open-world crime game is bound to cross the 100 million landmark before the end of this year.

Rockstar Games’ megahit has had so much success in large part due to the popularity of the GTA: Online mode. This takes the action of Grand Theft Auto series and puts it into a persistent online world where friends can play with one another and start gangs to compete against other clans. GTA V and GTA: Online are both huge drivers of revenues for Rockstar and Take-Two.

Take-Two’s fiscal 2018 revenues were up slightly to $1.793 billion from $1.780 billion in the previous 12-month period. The publisher’s “recurrent consumers spending,” which is its fancy name for microtransaction sales, were up 63 percent and were 42 percent, or $753 million, of the company’s total revenues.

GTA V’s sales could get another boost during Take-Two’s fiscal Q1 of 2019 thanks to a re-release in the form of the Premium Online Edition, which launched for PlayStation 4, Xbox One, and PC on April 20. That should help the publisher get through the summer and closer to the release of Red Dead Redemption 2 on October 26.