Before we had cars, motorbikes, or planes, horses stood as our primary means of transport. Re-creating their distinctive gait for animation in films, TV, and video games has traditionally been a tricky task, with many failed experiments along the way. Motion capture services makes the process much easier. But how does one mo-cap a horse?

As experts, Animatrik was approached to record true-to-life horse movements for a highly-anticipated video game currently in development. The goal was to capture a suitable range of horses, in all shapes and sizes, providing realistic, varied breeds which could later be added into the game engine. An indoor riding arena was scouted in Maple Ridge, Vancouver that had minimal light interference. One stable, four horses, and 44 cameras later … Animatrik breaks down exactly how to mo-cap a horse.

Although many animators and game developers host their own small mo-cap space to record basic human movement, a specialized partner  is necessary for complex projects such as equine mo-cap – especially when it means taking technology into an animal’s natural environment. “A studio isn’t setup to have horses galloping through it. You need to source a stable, horses, riders, and the spots,” begins Sara Cameron, producer at Animatrik.

We took our road kit (complete with state-of-the-art cameras) to the pasture for two full days of shooting. The crew tracked seven different horses of different shapes and sizes. “The priority for our motion capture specialists was achieving true horse motion, properly scaled to each horse. That way the post production team had raw size, rotation information and could decide on an artistic level how to add them into the game engine,” says Cameron.

Technical accuracy was paramount, and so the crew came prepared. It was necessary for Animatrik to undergo testing before the actual shoot. The team traveled out to an indoor riding arena which had minimal light that might affect captured data. “Our mo-cap system picks up infrared light, so we needed a location with lots of subdued lighting,” says Cameron. “We took the kit out to Maple Ridge, tested the rig, and determined how far those cameras could see the markers to find out which system would be best.”

The next step was to rent a life-sized plastic horse, covering its body in retro reflective markers so the resulting data would accurately recreate a horse’s length of bones, joint change and other specific elements of motion. The markers also needed to stay in place at up to 30 mph during a gallop. Animatrik sourced an adhesive made specifically for horses, which would resist even sweat. 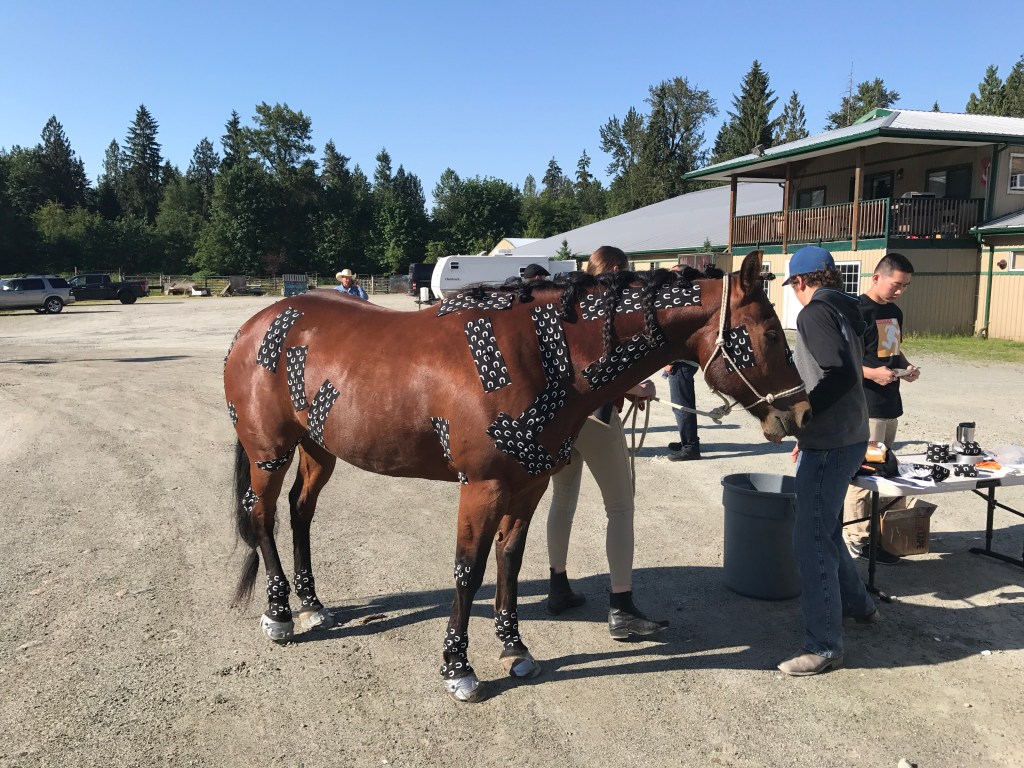 “I tested the markers on my Rottweiler and got her to run around the studio,” recalls Cameron. “The tape didn’t bother her, which is important: the animal’s safety and comfort is our first concern. But, as we discovered through shooting, dogs don’t sweat through their skin the way horses do. On our first day of shooting, the horses were dripping with sweat and markers kept falling off.”

A smart solution was needed. Thankfully, we had a range of horses to experiment with. At the end of the first day, four horses were taped up at once. If the markers fell off one during a gallop, the others could keep going while that rider went back to a mo-cap specialist to be re-calibrated. Soon after, the next horse in rotation would drop out, switching places. By following this process, the shoot ended up like a well-oiled machine.

In terms of cameras and software, the technology used on a horse mocap shoot is no different from the setup used when tracking a human body. However, camera configuration has to be significantly adjusted when limited by the size of a riding arena.

Horses need a large amount of space to move. Tripods could not be put on ground level, as that would limit space and potentially cause collisions. We ended up drill-mounting cameras into the walls, and rented a boom lift to ensure they were high enough to capture the action – they needed to see 10 feet in front of the ground-based camera. At least 44 cameras were placed in the rafters, taking the crew most of the previous night to set up.

“The people running start and stop didn’t have eyes on shoot,” explains Cameron. “We had to depend on each other as a team throughout. Our assistant director was on the floor, so she would ask the team to check out markers, quality of data, and so on. It was a real team effort for everybody involved.”

Reining in the actors

Our equine actors are sourced from a specialist, Boone’s Animals, whose business is to train and supply horses for production purposes. Having previously worked with these animals on the Warcraft set (although not in a motion capture capacity), the team knew to expect a well-behaved, high-quality performance.

However, every horse is different – just like every human has a different body shape. Movements that come naturally for certain horses will cause others to recoil or rear up. Sorting through the move list for each horse, at least 200 shots, was a huge challenge. All running, galloping, jumping and even falling had to be choreographed.

“Going from a stand still straight into a gallop wouldn’t be suited, or healthy, for some of the horses on set,” explains Cameron. “ I broke up the moves, grouping the shots into skills for each horse. From there, I organised them into a sequence of moves that allowed the horse to go from walking, to trotting, and more – all with fluidity.”

Motion capture of animals as large and unwieldy as horses remains a relatively unexplored area in cinematic production. It enables fast, production-ready results, but requires time investment and planning: although very similar to a human pipeline, horse motion capture takes a lot more experimentation. Before accepting the project, Animatrik tested all the motion data and adapted their pipeline accordingly.

“Processing a horse’s motion capture data will inevitably take longer than with human mocap – as you’re dealing with four legs instead of two – but with all the testing we did in advance, we’ve got a good system in place,” concludes Cameron. “Preparation, technology, and forethought means good mocap every time, no matter the challenges faced.”