We’re going to see Super Smash Bros. for the Switch at E3 next month, where it will likely be Nintendo’s biggest game of the show. I love Smash Bros., and it’s my go-to game when I want to play something with my friends. But I also adore it because I’ve had a fascination with crossovers ever since I saw The Jetsons Meet the Flintstones as a kid.

Even in its third decade, it’s delightful to see characters from different series, such as Mario and Samus, beat each other up. But ever since Super Smash Bros. Melee for the GameCube introduced Mr. Game and Watch and the Ice Climbers, the series has also done a great job of introducing surprising retro characters from the Nintendo Entertainment System and even earlier.

Since then, Smash Bros. has added R.O.B. the robot from the NES days, Little Mac from Punch-Out!!, and the dog from Duck Hunt. So, what’s left? At this point, adding a fun retro character is a tradition for the series. I’d like to nominate Mike from StarTropics, the underappreciated NES action-adventure game from 1990. 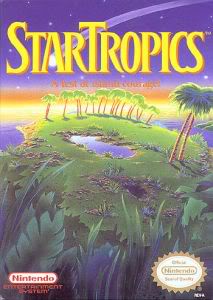 Not only does Mike have the most attractive first name ever, but his game is one of the NES’s best. StarTropics is like The Legend of Zelda but set in a more Polynesian world. It features palm trees, dolphins, submarines, and dungeons. So, you know, everything you need for a good game.

Even though StarTropics is a first-party Nintendo title for the NES, it doesn’t get the same kind of love from the company as its other games from that era. That’s largely because StarTropics never came out in Japan, Nintendo’s home country. Oddly, Nintendo decided it wanted to make a game specifically for Western audiences.

You’ve probably heard of lots of games from Japan that never came to the U.S. NES, like Mother. This is the odd reversal, and I still don’t really understand why. Why did Nintendo think that Japan wouldn’t enjoy StarTropics? If you play it, other than having the hero named Mike, it doesn’t strike you as an especially “Western” game. Why did they cut it off from Japan and any sales that could have come from there?

But Nintendo did. It did the same for StarTropics sequel, Zoda’s Revenge: StarTropics II, which came out in 1994 as one of the NES’s last major releases. That was the last StarTropics game, and the series is rarely included in Nintendo crossover projects like Super Smash Bros. (although at least Nintendo included the first StarTropics in the NES Classic Edition’s library).

Well, no more, I say! Let’s add Mike to Super Smash Bros. for the Switch! It’s time to give StarTropics its due.

There are arguments against this idea. First off, Japan audiences would have little interest in the character. Well, I remember when Marth and Roy were in Super Smash Bros. Melee before a Fire Emblem game ever came out in our country. Turnabout is fair play.

There’s also the problem of Mike’s potential moveset. In StarTropics, he largely uses items like baseball bats and Yo-Yos for his attacks. That already sounds a lot like Ness from Earthbound, who has been in the series since its debut. But Nintendo did manage to give an interesting moveset to the freaking Wii Fit Trainer, so I’m sure Nintendo can think of something creative for Mike besides just turning him into a Ness clone.

So give us Mike in Super Smash Bros.! And while you’re at it, can we have a new StarTropics for the Switch? Maybe something like The Legend of Zelda: Breath of the Wild but with, you know, islands and dolphins? Thanks.