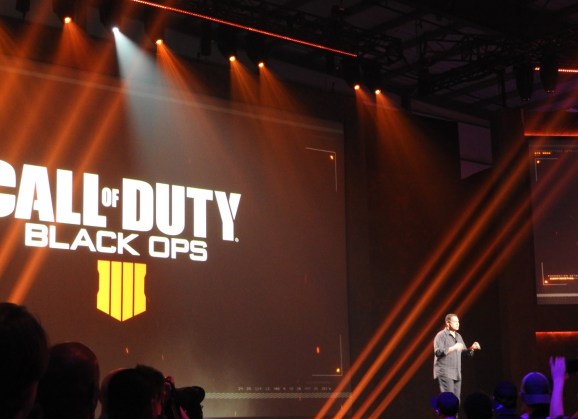 Treyarch studio head Mark Lamia confirmed something that shouldn’t come as a surprise: Call of Duty: Black Ops 4 will get a battle royale mode called Blackout when it debuts on October 12.

Blackout will be the biggest multiplayer map that Treyarch has ever made, Lamia said — 1,500 times bigger than any previous Black Ops multiplayer map. Treyarch is one of three major Activision-owned studios that make the Call of Duty games, and Santa Monica, California-based Treyarch has focused on the extremely popular Black Ops series. The Blackout map will be a blended universe of previous Black Ops games. The Blackout map will be available on launch day on October 12.

“As for battle royale games, it’s no secret,” Lamia said. “To go here, it had to be unique and special and be something that you can only do in Black Ops.”

The new mode is a response to Fortnite and PlayerUnknown’s Battlegrounds, which in the past year have skyrocketed in popularity and represent the biggest threat so far to Activision’s billion-dollar-per-year Call of Duty franchise.

The battle royale mode twill still have traditional Call of Duty combat, with familiar controls and fast-paced action. But it will have many more players than the typical 12 or 18-player modes. Lamia said he could not yet say how many players will be in the mode, but typical battle royale games like Fortnite or PlayerUnknown’s Battlegrounds have 100.

“In multiplayer, we brought new ways to play, compete, and watch,” Lamia said. “But throughout this journey Treyarch has never shied away from introducing something new or unexpected to Call of Duty, and breaking with convention if we thought our players would have fun with i t. That tradition will continue with this one. Black Ops IIII is a living example of what we do best as a studio.”

Players will be able to play the Blackout map with their favorite weapons and vehicles on land, air, and sea. The players will also see parts of older multiplayer maps from past Black Ops games, embedded in the landscape of the large Blackout map.