Steven Spielberg’s virtual reality-focused film Ready Player One was expected to increase public interest in VR, and early survey results suggest that it may have succeeded. Speaking at the iQiyi Technology & Entertainment World event today, HTC China president Alvin Wang Graylin said that the film had a “significantly positive impact on intent for VR purchase in [the] next 12 months,” citing a recent survey of Chinese customers.

Canvassing 4,288 people in April 2018, the survey found that 60.3 percent of people who saw Ready Player One planned to buy or upgrade VR hardware over the next year, versus only 37.2 percent who hadn’t seen the movie, an over 23 percent increase. While the cause-and-effect relationship is arguably fuzzy — people who were drawn to the VR premise might have been more likely to make VR purchases before seeing the film — the movie’s pro-VR theme likely had at least some positive impact on people who were unfamiliar with or on the fence about VR. 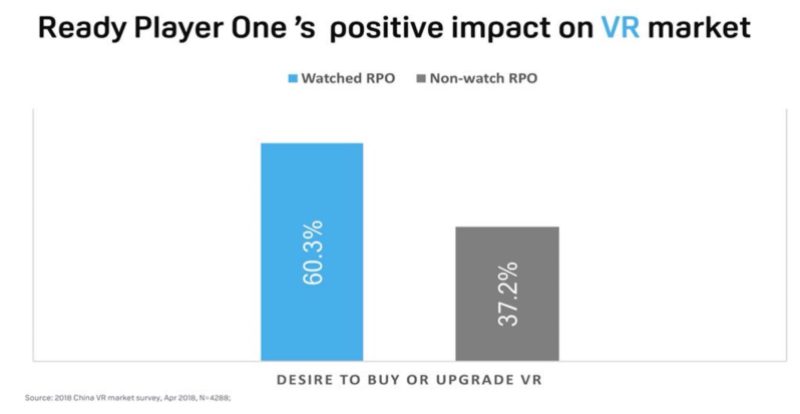 Interest in VR is growing in China, and Chinese developers are rapidly moving to pioneer new headsets, accessories, and services. China’s Pimax recently debuted what it called the world’s first 8K VR headset; Chinese makers of high-end VR locomotion accessories such as KatVR are gaining steam; and iQiyi — the “Netflix of China” — has debuted both a VR streaming service and 4K headset for domestic use.

According to Box Office Mojo, more than half of Ready Player One‘s $439 million foreign box office take came from China, where viewers spent over $220 million to see the film. That’s significantly more than the roughly $135 million earned by the movie in the United States.

Graylin also spotlighted survey results showing that playing games was a primary activity for VR users across three categories: PC/console VR, all-in-one/standalone VR, and mobile phone-powered VR headsets. He noted that while casual VR users were highly likely to watch videos in VR as well, “premium” PC and console VR users were much less likely to do so. Viewing sports, developing VR software, and studying each captured around a quarter of VR users of one type of headset, while working, creating art, and socializing in VR were noticeably less popular uses of the technology.

Sales of VR and AR headsets are expected to grow by 50 percent annually through 2022, according to IDC. Indeed.com similarly notes that postings for VR and AR jobs have risen 93 percent since 2015, as companies continue to develop the software, services, accessories, and hardware to meet increasing consumer demand.