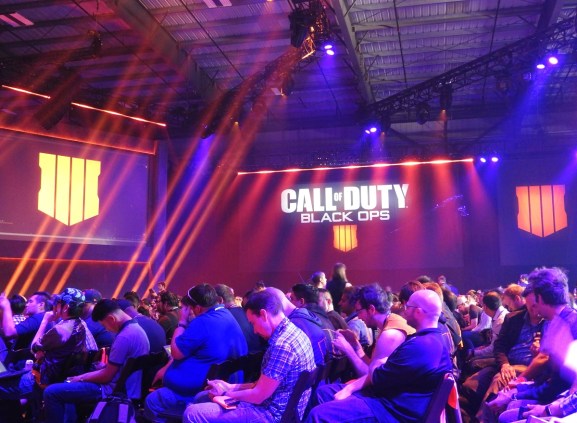 In a press briefing, Lamia confirmed earlier press reports that Treyarch decided to drop the traditional single-player campaign from Call of Duty’s latest installment, which debuts on the PlayStation 4, Xbox One, and PC on October 12.

In the past, the campaigns have been memorable and a necessary ingredient. But as multiplayer rises in popularity, Treyarch may have come to the conclusion that it could survive without a single-player version. Polygon previously reported that the campaign had problems and wasn’t like to be done in time for the launch this fall. Activision rotates three studios, so that each one has to produce a Call of Duty game once every three years. But even with that lengthy time, things can go wrong in game development.

For those who want a solo experience, players can get some of it as they try out the tutorials for the specialists, like Ruin, who is coming back with special abilities like pounding the ground and destroying everyone in a certain radius. The specialists will have solo missions that have more of a narrated experience than in the past, Lamia said.

We don’t know the reason behind this decision for sure, but a bigger priority this year is to make sure that the game has a multiplayer battle royale mode — where 100 players fight to be king of the hill — to compete with rivals Fortnite and PlayerUnknown’s Battlegrounds, which have recently skyrocketed in popularity.

Treyarch is also investing more heavily in the Zombies mode, with three major co-op maps across three different time periods. Whatever the reason for this change, Electronic Arts might also view this as an opportunity, as it has confirmed that its upcoming Battlefield V game has a single-player campaign.

As a fan who has played every Call of Duty game since its start, I’m not in love with the idea of ditching single player, which often gave me a reason to care about the characters in the game.