Rob Kostich manages the Call of Duty franchise at Activision Publishing. And this year, that means he is overseeing Treyarch, the studio that is making this year’s multiplayer-only Call of Duty: Black Ops 4.

I’m not a big fan of the decision to ditch the single-player campaign in this year’s title, but I sat down with Kostich yesterday to get Activision’s perspective on the evolving franchise. He said that the team is making decisions and taking risks based on what will be fun for fans and the larger community.

We’ll find out if the studio made the right calls — to dump single player and to add a battle royale mode — on October 12, when the game debuts on the Xbox One, PlayStation 4, and PC. Kostich explained to me his perspective and the studio’s perspective on why it broke with the past and took a new road, which included tripling down on its Call of Duty Zombies experience.

I hope it all works out. But I’m worried. Here’s an edited transcript of our conversation. 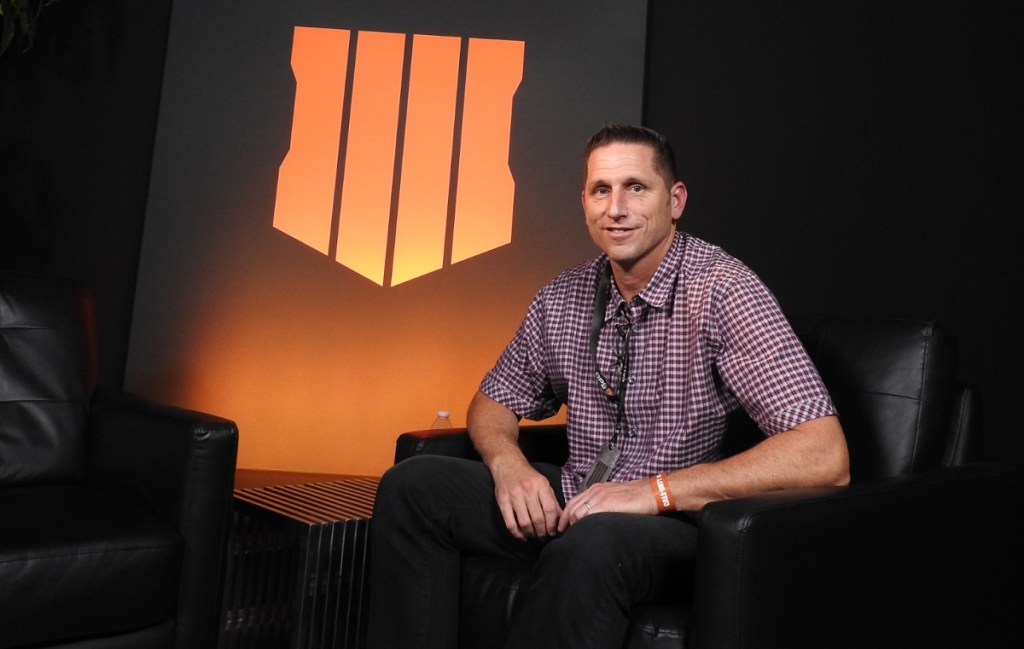 Above: Rob Kostich, executive vice president and general manager of Call of Duty.

GamesBeat: The burning question for me is single-player. Can you provide more context for not doing it this time?

Rob Kostitch: For not including it? One thing that — if you want to go all the way back to Black Ops III, even the campaign in Black Ops III was designed around cooperative and bringing people together. That was one of the design principles. From the beginning of development here, Treyarch has been very focused on bringing friends together to have fun in new ways. From the earliest parts of development, we’ve been prototyping a lot of new things to do that. As you saw during the presentation today, certainly some of those new ideas have now manifested in our new mode, which is called Blackout.

Beyond that, I would say that our commitment to story is still there, but just in different ways. For us, in terms of multiplayer now, building out the multiplayer universe we thought was a really great opportunity for us. This is a mode that people play for months and years on end. Giving people a better way to connect to this universe made a lot of sense, having backstory there. When you play the solo experience within multiplayer, it’s going to teach you how to play those characters and understand their abilities really well. It’ll also give you a lot of their backstory, so you’ll have a better connection to them than you’ve ever had.

GamesBeat: I kind of buy that, but I don’t buy all of it. It seems like single-player, in some ways, is the thing that engages me the most. I care about the characters in multiplayer because I’ve seen the context around them. The idea of arch-villains or buddy characters or whatever, those are very emotionally memorable. That part seems like a hard thing to let go. I don’t know how you guys let go of it.

Kostich: From a franchise perspective, certainly Black Ops is doing something very new this year, something we’re very excited about. We think the community is going to be able to play it for a long time and have a lot of fun with it.

Across the franchise, though, what I really like about what we’re doing now is we have a strong set of differentiated experiences. While this game doesn’t have a dedicated campaign, that doesn’t mean that others won’t.

GamesBeat: Does the concept of a trade-off come in here at some point? Did you make some hard decisions? If you’re going to include something late-breaking like Blackout, something else had to give?

Kostich: Development is always a journey. We’re always exploring and prototyping things along the way. As we got through the middle of development, this really started to come to be for us, and we thought about the opportunity ahead for people to enjoy this game for a long period of time. The studio is very passionate about doing something different this year. We felt we had a great plan.

Even in terms of last year, we learned a lot. We released Zombie Chronicles and the response to that alone within Black Ops III, for all that extra Zombies content, was fantastic, beyond our expectations. That’s why you also start to see more Zombies content on day one in this game, more than we’ve ever done before. We’re trying to listen to the community and provide them with the experiences they like, and we’re also trying some new things. 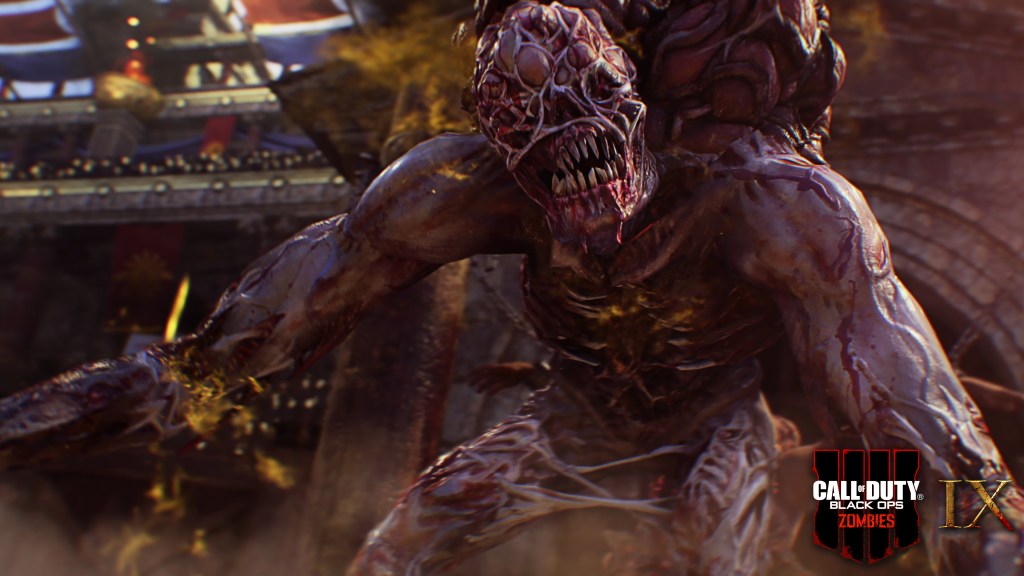 Kostich: I wouldn’t say it’s at the bottom at all. In fact, we’re as passionate about some of these dedicated campaigns as anyone is. We’ve been making them forever. We’ll continue make some of these as we move into the future as well. Black Ops was just unique. We felt we had a unique opportunity to do something different for the community, and so we embraced it. We think we’ll have a great experience for the fans.

GamesBeat: The fundamental structure, does it still seem like the way you want to keep doing things? One game every three years at each studio?

Kostitch: That’s certainly the plan right now. We’ve been doing this for a long time with a Call of Duty every fall. Every year the level of engagement we get with the new content is significant. It’s what the community is responding to. We want to give them the best set of experiences we possibly can. 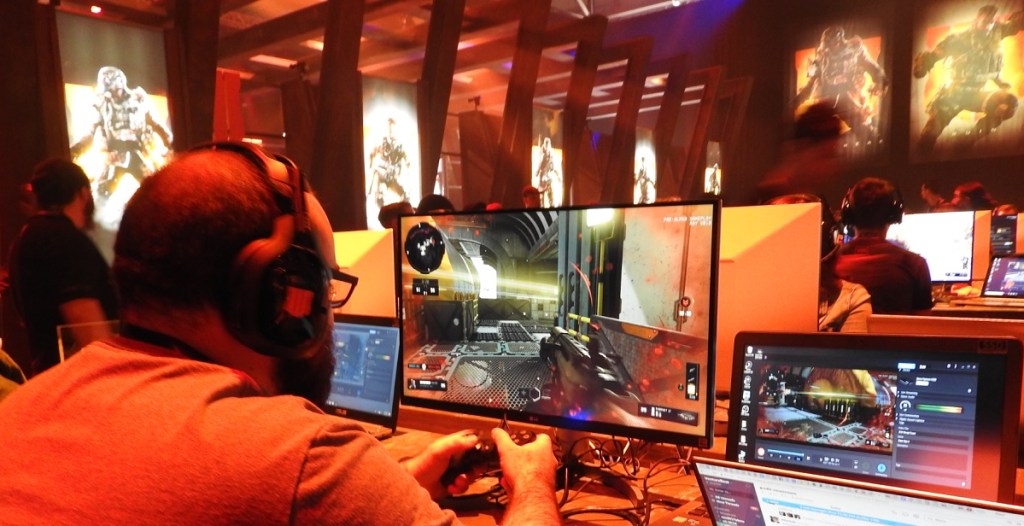 GamesBeat: As far as Black Ops, it’s special in that it’s the most popular version, right? What did you identify as the things that make it so popular, compared to some of the other Call of Duty games?

Kostich: A lot of the long-term success of the Black Ops series has been—most unique to Black Ops is the engagement with multiplayer and Zombies. Treyarch has done a great job across that front. We see the community playing Black Ops games in particular for really long periods of time. We want to give the community more content there for those kinds of experiences than we ever had. Again, that’s what the team was really passionate about.

In terms of Blackout, it was really important for us to do something we feel is going to be unique in this space, bring things to bear that only we can bring. That’s an interesting way for people who’ve been fans of this series to bring that universe all together into one place and have fun in different ways.

GamesBeat: Some of the Zombies thing reminded me of that hoax story about Call of Duty Rome or whatever it was. Did that have any bearing on why to do it that way?

Kostich: You’d have to ask Jason for the motivation and inspiration behind that. But Zombies has been a real crazy journey, if you think about it. It spans so many crazy ideas. Somehow the team finds a way to connect it all together. This is a new narrative, and we’re also giving fans something remembered with the Blood of the Dead thing. The Zombies community is going to be really happy with the breadth of content here.

GamesBeat: I missed something there, I think. Why did they cheer for Blood of the Dead?

Kostich: In Blood of the Dead–one of the favorite maps we’ve ever had in our history is called Mob of the Dead. This is a different spin on it, where the Origins cast from Black Ops III is inserted into that map. We’ve done some new stuff with the map as well. That’s the thing our community has been crying out the loudest for, to see us remaster that. We’ve taken a different spin on it. The real hardcore Zombies guys are super excited about that.

GamesBeat: It seems like an interesting change, to go from a small number of players to something so large in Blackout. How big a change is that for this game, to accommodate that? It’s always been six on six, even in War mode from WWII.

Kostich: We did Ground War in the past, which was nine on nine. But yeah, Blackout is an order of magnitude different for us in every way, from player count to map size. It’s 1,500 times bigger than Nuketown. It’s doing things very differently than anything we’ve ever done. It’s pushed the team in new ways, which is exciting. It’s through these things that we uncover new places Call of Duty can go in the future and try different things for the community, let them have fun in different ways. 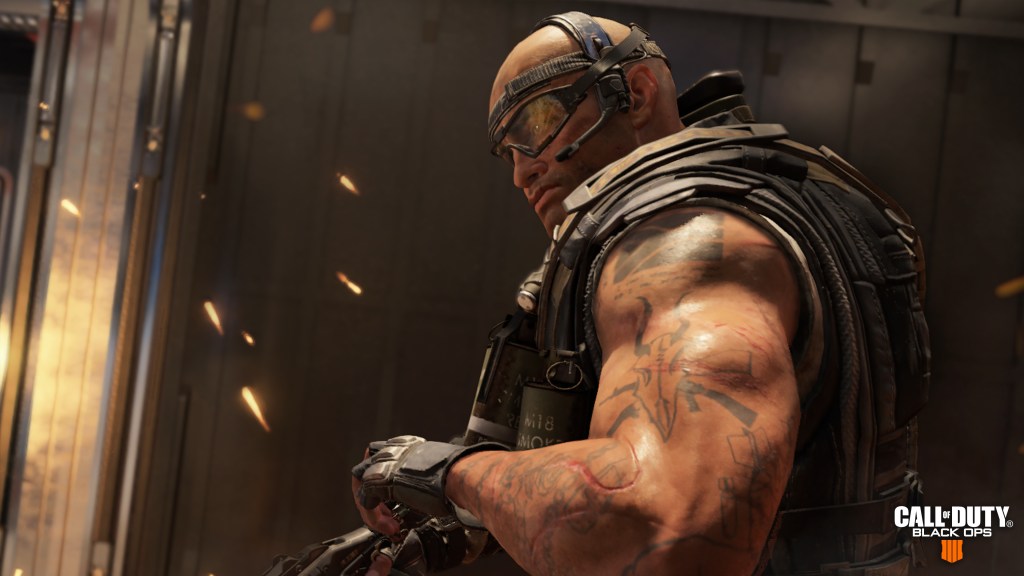 Above: Ajax in Call of Duty: Black Ops 4.

GamesBeat: Zombies has always been a creative outlet. If you kept some other things the same, you could always go crazy in Zombies, veer off into completely foreign territory.

Kostich: Zombies may have the most creative freedom out of anything we do. It’s the most pliable, I’d say.