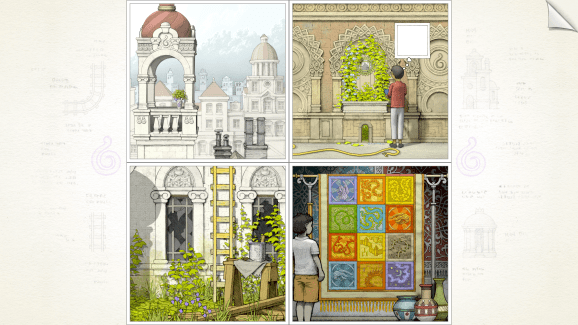 Jason Roberts’ Gorogoa is one of the most inventive puzzle games to come out in a long time, and the intrigue continues with a new level — sort of. Publisher Annapurna has released it on PC, iOS devices, and the Nintendo Switch, and it’s arriving on Xbox One and PlayStation 4 on May 22, which is when the new content will roll out to players across platforms. This won’t feature newly designed puzzles, though; rather, it’s the original demo from 2012, which has puzzles that didn’t appear in the final game.

Gorogoa’s marvels move across time and space in beautiful and mysterious ways. It follows the journey of a protagonist across his lifetime as he chases the titular character and performs enigmatic rituals. The entire world is contained within four sliding tiles, which interact with each other in surprising and delightful ways. Players manipulate the tiles by moving them around or zooming in and out of their frames.

Since its debut, it has received numerous nominations like Mobile Game of the Year at SXSW, and it’s taken home several awards like the Innovation Awards at the Game Developers Choice Awards and best Debut Game at the British Academy Games Awards earlier this year.