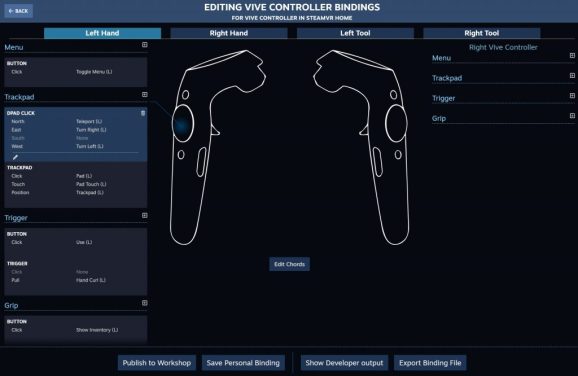 Valve is putting accessibility right at the heart of controlling VR with the launch of a new feature today named SteamVR Input.

In supporting a wide range of headsets from its own SteamVR devices like the HTC Vive to the Oculus Rift and Windows VR kits, SteamVR accommodates a number of different controllers. For developers, it’s tough to optimize your app for each of these inputs, and it’s often the case that a control scheme doesn’t always feel quite right on at least one type of controller. Furthermore, players that favor their left-hand or who have disabilities often aren’t catered for, either. SteamVR Input, then, introduces user-made configurations to help everyone and anyone get the most out of VR.

Simply put, SteamVR Input allows you to create alternate control schemes for any game outside of the developer’s default bindings.”When using SteamVR Input, developers expose high level “actions” in their applications that control how the binding UI presents their game to users,” Valve’s Joe Radak explained in an update blog. Developers themselves can also use the system to create alternate control schemes quicky.

SteamVR Input works with every SteamVR application; it doesn’t require developers to update their app to support it. Changing controls is done via a new UI found in the settings menu when you have the headset on. Better yet, once you’ve perfected a control scheme you can then share it with others on Steam Workshop.

For now, SteamVR Input is in beta, and you’ll need to opt-in to the latest beta build of SteamVR to try it out.