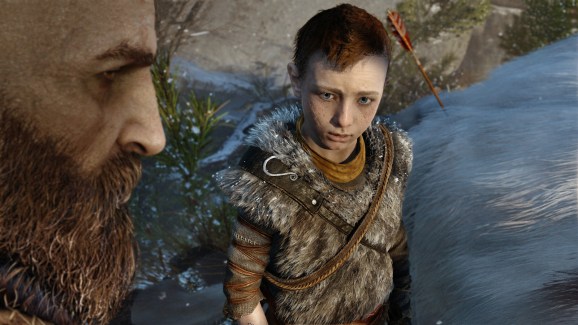 The game's hero looks up at the character he must protect.

Sony’s PlayStation 4 continues to outsell the competition in a healthy console market, according to industry-tracking data firm The NPD Group. As a platform, which includes PS4, PS4 Slim, and PS4 Pro, the Sony family of consoles generated more revenue than any other system last month. But God of War also ensured that PlayStation 4 had one of the best Aprils ever in terms of units sold.

It turns out that people were way into checking out Kratos’s latest adventure. The PlayStation 4 Pro 1TB Limited Edition God of War system topped the month in terms of dollar sales for a single console bundle. But Nintendo is still doing well with the Switch 32GB Neon Red/Blue Joycon bundle outselling all other hardware SKUs in terms of units sold.

And the underlying point here is that while Sony continues to take the top spots driven by demand for its big releases, the entire console market is thriving.

“For the 2018 year to date period, hardware spending has increased 14 percent to $1.2 billion,” said Piscatella. “Spending gains for Xbox One, PlayStation 4, and plug-n-play devices such as the SNES Classic have driven growth.”

Expect that growth to continue as Sony launches Spider-Man for PlayStation 4 and Nintendo gets Smash Bros. on Switch. And with the Electronic Entertainment Expo trade show coming up in June, we may yet learn about a number of other reasons why consumers will want to pick up new consoles going forward into 2019 and beyond.