Razer is pushing forward on laptop gaming with a pair of sexy products for gamers. It is unveiling a new version of the Razer Blade gaming laptop, which the company describes as the world’s smallest 15.6-inch gaming laptop. And it is launching a new Razer Core X external graphics enclosure, which can boost the gaming performance of the laptop to desktop levels.

Both are follow-ups in the family of products to the recently launched Razer Blade Stealth and Razer Core V2 External Graphics Enclosure. But now Razer is taking advantage of the latest improvements in Nvidia’s MaxQ power-savings technology to build a smaller laptop, and it has brought the price of the graphics enclosure down dramatically, from $500 to $300. Both products are aimed at people who aren’t sure if they want a workstation or a battlestation.

Each laptop display is individually custom calibrated in production for amazing color accuracy out-of-the-box, said Kevin Sather, global director of product marketing for systems at Razer, in a press briefing.

“Every screen that comes off the line in the factory will have custom calibration and you can always return it to that calibration,” Sather said.

The bezels on the flanks of the display are just 4.9 millimeters wide. It has a scratch-resistant anodized black finish. To keep the heat down, Razer used vapor chamber technology for the cooling instead of traditional heat pipes found in most gaming laptops. The laptop is just 0.66-inches thick. The chassis is CNC milled from a single aluminum block for a study and compact design. 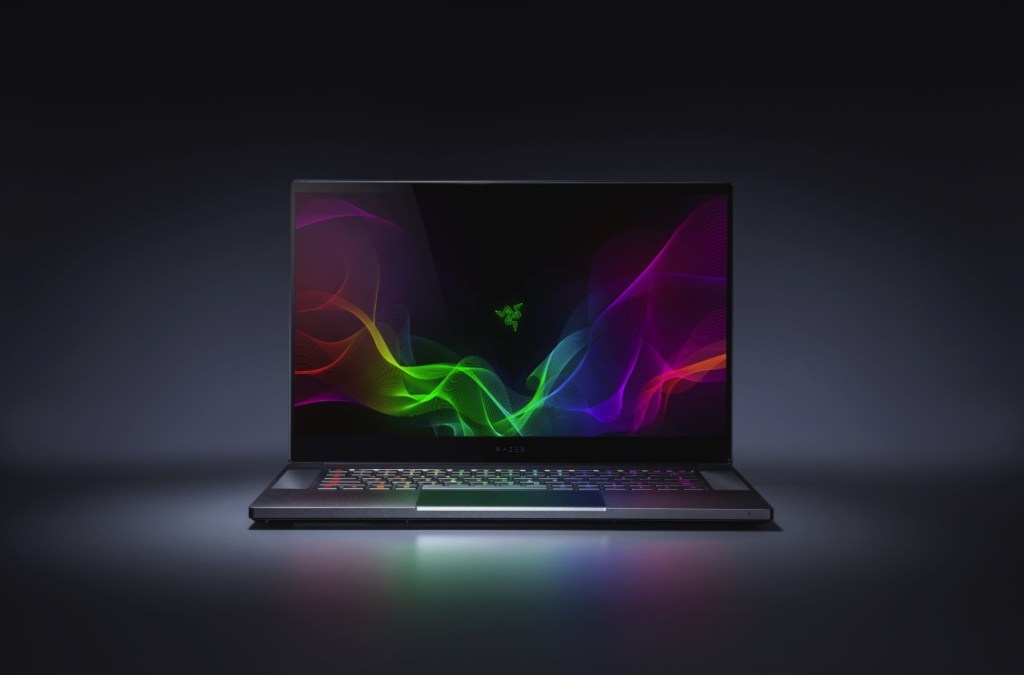 “The chassis is 3 percent smaller than our 14-inch model despite the bigger screen, and that makes it the smallest laptop,” Sather said.

The vacuum-sealed vaporized liquid helps dissipate heat generated by components. The touchpad is larger and it matches Microsoft’s precision touchpad tech with improved gesture support and accuracy. The keyboard has a different, full-size layout with a shorter travel depth. The amount of force it takes to actuate the key isn’t much different compared to the past.

The laptop uses nanoparticle material and graphite-based server grade thermal interfaces to reduce hot spots and facilitate heat transfer, while high-performance low-noise fans push air across dual heat exchanges with 0.1mm thin fins, quickly moving heat out of the chassis and away from the user.

“It’s thinner and more efficient in moving heat out of the system,” Sather said.

The Razer Blade uses the new 8th Gen Intel Core i7-8750H processor with six cores and Turbo Boost speeds up to 4.1 GHz. There are options for Nvidia GeForce GTX 10 Series graphics (1060 or 1070 available).

For multitasking, Razer also includes 16 GB of 2667MHz dual-channel system memory and fast PCIe SSD storage with configurations up to 512GB, with support for up to 32 GB of memory and up to 2 TB of storage.

“We are proud to have again stepped-up as an industry leader, taking laptop engineering to the next level to give gamers the performance they require and the mobility they desire,” said Razer CEO Min-Liang Tan, in a statement.

For a limited time, new Razer Blade owners can access $420 worth of games and software, including immersive VR titles such as Arizona Sunshine, popular games like Cuphead, and FL Studio Producer Edition, a professional music production suite from Image Line.

The anti-ghosting keyboard is powered by Razer Chroma and offers 16.8 million colors per key, customizable through Razer Synapse 3 software. New power management options are also available, including modes to boost graphics performance or maximize the run time of
the built-in 80 watt-hour battery. Sound is delivered through dual front-firing speakers and features Dolby Atmos for immersive audio.

Connectivity options includes the ability to output to up to three external displays via Mini DisplayPort, HDMI, and Thunderbolt 3. You can connect peripheral devices to the laptop with three USB 3.1 Gen 1 ports. It weighs 4.6 pounds. 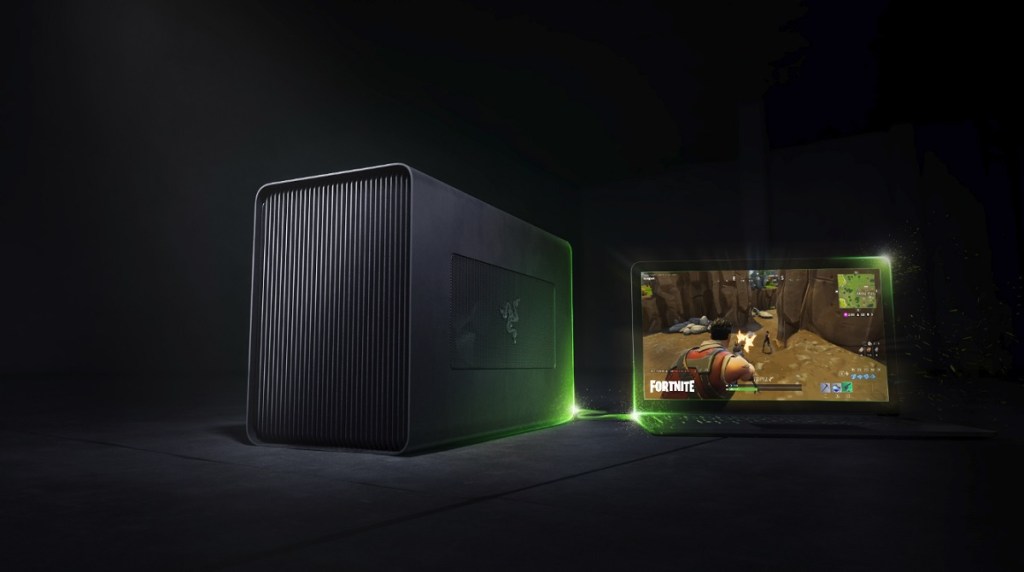 Above: Razer Core X is a $300 graphics enclosure.

Razer also announced today the availability of its latest external graphics enclosure, the Razer Core X, with a $300 price tag compared to $500 for the previous Razer Core V2.

The plug-and-play eGPU can deliver the latest desktop-quality graphics to Thunderbolt 3 capable PC and Macintosh laptops with external graphics (eGFX) support. As new graphics cards enter the market, they can be swapped in with ease. It weighs

The new Core X transforms integrated graphics laptops like the Razer Blade Stealth into desktop-class gaming machines by adding an external graphics card. Gamers can also futureproof their gaming laptops or unlock VR-Ready experiences by boosting the performance
beyond the current laptop’s limits. 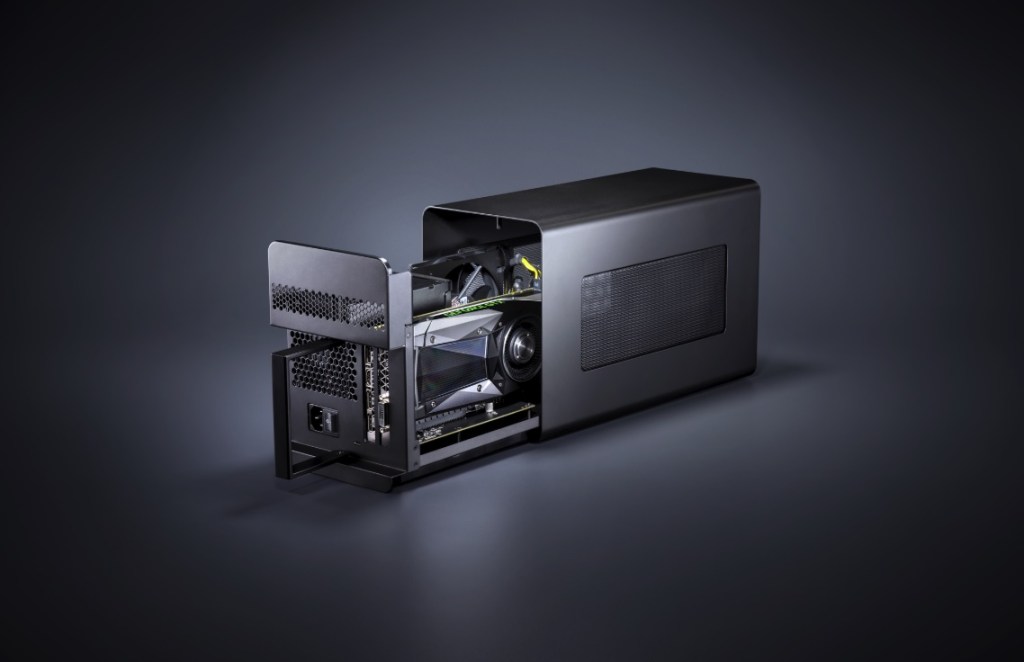 The Razer Core X embraces plug-and-play capabilities with the Thunderbolt 3 (USB-C) connection to the laptop. This eliminates the need for lengthy reboots every time the external graphics enclosure is connected. The convenient Thunderbolt 3 connection also yields fast speeds at up to 40 Gbps.

The Razer Core X houses a 650-watt ATX power supply to provide adequate power for the latest and future graphics cards. A single Thunderbolt 3 connection to the laptop now provides 100 watts of power for laptop charging.