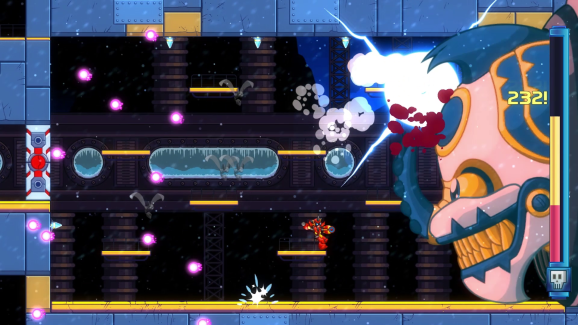 Indie game studios Batterystaple Games and Fire Hose Games announced today that 20XX is coming to PlayStation 4 and Switch on July 10, with an Xbox One version following on July 11.

20XX is a roguelike, a kind of game where death resets your progress and levels generate randomly, inspired by the Mega Man side-scrollers. It came out for PC via Steam in August after an Early Access period. It has sold over 100,000 copies on Valve’s digital store.

Coming to consoles will introduce 20XX to a larger audience. This is especially true on Switch, since indies have been finding great success on Nintendo’s home console/portable hybrid. Indies like Stardew Valley and Shovel Knight have comfortable and profitable homes on the platform.

Mega Man has been the inspiration behind many indies, including Mighty No. 9 and Azure Striker Gunvolt. 20XX is able to stand out thanks to its roguelike implementations.