When talking about the best platformers of the 16-bit era, you probably hear the same names over and over again: Sonic the Hedgehog, Yoshi’s Island, Donkey Kong Country, and more. But Rocket Knight should stand with them.

This series of 2D side-scrollers was Konami’s attempt at getting into the whole mascot gaming franchise thing Sonic started in the early ’90s. But Rocket Knight is far from a knockoff. These games featured a mechanic that set them apart — a jetpack. The series’ hero, Sparkster, uses his wearable thruster to dash through the sky. You could use it for attacks and for maneuverability. It even has a kind of pinball effect; hitting walls while zooming along with your jetpack bounces you off them. Ricocheting through hazards — and hitting enemies along the way — is an important part of the franchise.

Adventures had two sequels. Sparkster: Rocket Knight Adventures 2 for the Sega Genesis and Sparkster (yes, just Sparkster) for the Super Nintendo. The names are almost identical, and they both came out in 1994. But these are two different games. Both are similar to the original, although the Genesis Sparkster has the rocket park charge automatically. In the original, you have to hold a button to rev the device up a bit before you can use it. The SNES Sparkster retains that, but having it charge automatically gives the Genesis game a faster pace.

But all three are worth your time. If you love those 16-bit era platformers as much as I do and haven’t played the Rocket Knight games, you need to.

Of course, getting the games can be tricky. You’ll either still need to have your Sega Genesis or Super Nintendo handy and buy the original cartridges (Sparkster for the Genesis is the most expensive; you’ll probably pay at least $60 for it), or you’ll have to depend on ROMs. Sadly, Konami has pretty much left the console business these days, so they aren’t doing anything in the way of retro compilations. And Sparkster did not appear as a game on the SNES Classic Edition.

But there is one Rocket Knight game you can buy easily! In 2010, Konami made a new entry in the series as a digital release for PlayStation 3, Xbox 360, and PC. It’s still on Steam, and the Xbox 360 version is backward-compatible on the Xbox One. 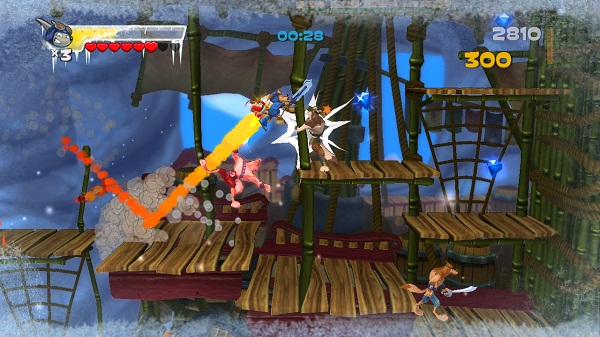 It’s not as good as the originals. The 2010 Rocket Knight is too easy and short when compared with Sparkster’s 16-bit outings. But it’s still a fun game with plenty of rocket pack action.

For the best Rocket Knight experience, you need to play the 16-bit classics.