Microsoft today released a new preview for PCs with Edge, Narrator, kernel debugging, Task Manager, and mobile broadband improvements. This build is from the RS5 branch, which represents the Windows 10 update the company plans to release later this year. 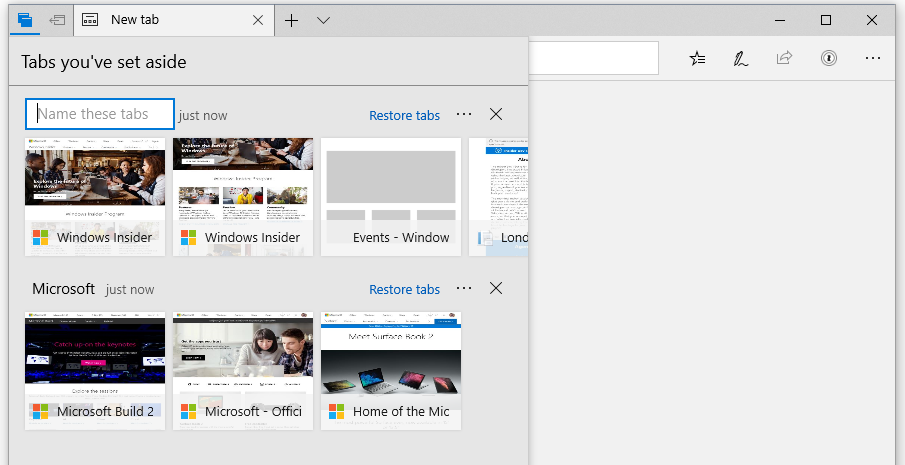 First, Edge has received a redesigned “Settings and more” menu (organized into groups with icons and some keyboard shortcuts), a top sites section in the Jump List on the Windows taskbar or Start Menu, and an option to organize the tabs you’ve set aside (pictured above). There are also new “Show in folder” and “Copy link” options in the right-click menu in the Downloads pane.

Next, the Narrator’s scan mode now supports selecting content in Edge, Word, Outlook, Mail, and “most text surfaces.” For a full list of selection commands, refer to Narrator’s Show Commands List by pressing Caps+F1. Once content is selected, you can copy it to the clipboard with CTRL + C.

For those who care about debugging tools, there is a new preview of WinDbg available, and support for IPv6 is being added to KDNET. To make room for the larger headers required for IPv6, Microsoft is decreasing the payload size of packets and declaring a new version of the protocol so that host PCs running the latest version of the debugger can be used to debug target PCs that only support IPv4.

After introducing an improved Mobile Broadband USB class driver in build 17655, Microsoft has now set it as the default driver. To try it, install this build on a PC that relies on mobile broadband for cellular connectivity and turn off Wi-Fi.