Sega recently launched a new type of Total War game, Total War Saga: Thrones of Britannia, as the latest in a long-running series of strategy titles for the PC.

I gave it a whirl and checked out how it offers a new take on real-time combat with a meta-layer of strategy and diplomacy. Total War Saga: Thrones of Britannia dwells on a particular historical period, with the battle for the British Isles during the Viking invasions. It starts after Alfred the Great wins a victory over the Nordic invaders at the Battle of Edington in 878 A.D. It is available on the Windows PC.

I played the Viking Sea Kings on the normal level. It was easy for me to grasp, but I’ve been playing the franchise since it started in 2000 with Total War: Shogun. The strategy series now has 15 entries that have combined to sell more than 20 million units. Developer The Creative Assembly, the studio behind Total War, also made Halo Wars 2 for Microsoft. The fantasy-themed Total War: Warhammer II debuted in September, but Britannia takes the series back to history.

I wish I had time to play it more. But you can check out a sample of it in the video. By the way, I’ll be interviewing Rob Bartholomew, studio brand director at Sega’s Creative Assembly, next Wednesday in London at the Casual Connect Europe event. We’ll be talking about catering to both the hardcore and the mainstream and pivoting into new business models, such as free-to-play. 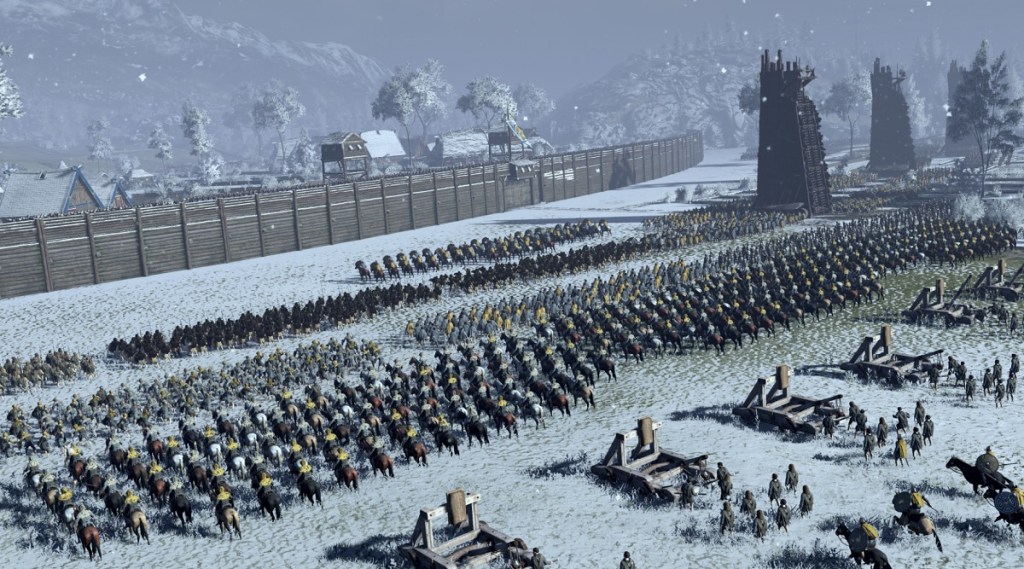 Above: Thousands of soldiers can fight in real-time combat in Total War Saga: Thrones of Britannia.

Unlike the Total War games that can span huge eras, Total War Saga games will explore key flashpoints at distinct places and times in history. Time progresses at about one season per turn, and a game might take about 200 turns to finish. That’s a lot of time.

The strategic map is built on Total War: Attila, which is about the fall of the Roman Empire. But while Attila covered much of Europe, the Britannia strategic map is much more concentrated. The whole geographic area is under a much tighter microscope. You move your armies around the strategic map, and when you meet another army in battle, the action zooms into a 3D landscape where the enemies clash.

When I first zoomed into a battle, I noticed that I could see the individual shops in a bazaar in the middle of a small settlement. I zoomed out and could see the few square miles of battlefield where the armies could maneuver. That represented an astounding amount of detail.

The game depicts a defining moment in British history, when Alfred the Great defeated rival Viking factions. While he beat the Vikings, he subsequently made a deal with them. He converted the Viking leader Guthrum to Christianity, and then, he used the Vikings as allies to become the dominant ruler in England. For the first time in 80 years of Viking raids, the territories enjoyed a measure of peace. That, in short, is your own task in the game — to become Britain’s ruler.

As the game begins, you face a series of choices that can branch the story in different historical directions. You can achieve victory by aggressively expanding through war, by increasing your fame through construction, achieving technological innovations or influence, or by completing a series of objectives for your particular faction’s history.

Other factions include the English, the Gaels, the Welsh, or the Great Vikings. The last time, I played King Flann of the Mide clan, one of the Gael factions. 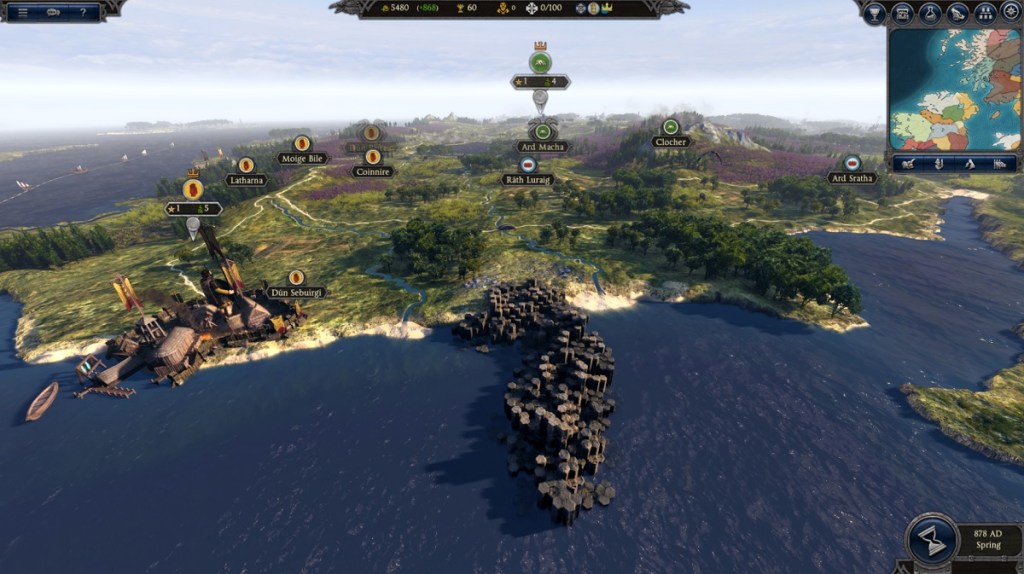 Above: Rule Britannia. That’s the goal of Total War Saga: Thrones of Britannia.

The tech tree is divided into eight military and six civic branches. You have to research things like Missile Specialists to get better ranged units. When you do it, those units are available for you to recruit in the pool.

Each province on the map consists of a provincial capital and a series of minor settlements. Capitals have walls and garrisons for defense, have six building slots, and tend to house structures relating to finance, trade, infrastructure, production, and the military. Capitals also house larger religious centers, and famous cathedrals can be built in the appropriate towns, granting fame for your leader. Your leader gains traits, such as “passionate,” or attributes, such as “zeal,” inspiring better performance from followers or armies.

As your leaders gain experience, you can customize how your faction develops. You can add more Champions as your followers to improve the leader’s combat abilities, or you can add Quartermasters to improve your logistics. So, your leader doesn’t really change. But the followers behind your leader determine the unique characteristics of what the leader is capable of doing. You can tune the followers for combat or for running a province with bureaucratic efficiency.

I played the Dyflin clan, known as the Giant Slayers, led by my King Bardr, and squared off in battle against the Laigin clan. We were pretty evenly matched, but my soldiers had the better training.

In the battle I included in the video, I had a pretty large army, with plenty of ax soldiers, some spear units, and just a couple of bow units. It was a bit difficult to keep track of things because the entire battlefield was covered with thick woods. I had to zoom in periodically to see what was happening, and everything broke up into a bunch of mini battles as units retreated or charged in different directions.

Like I said, I wish I had more time to check it out. If I get time to revisit my pile of shame, I’ll pick this one up.