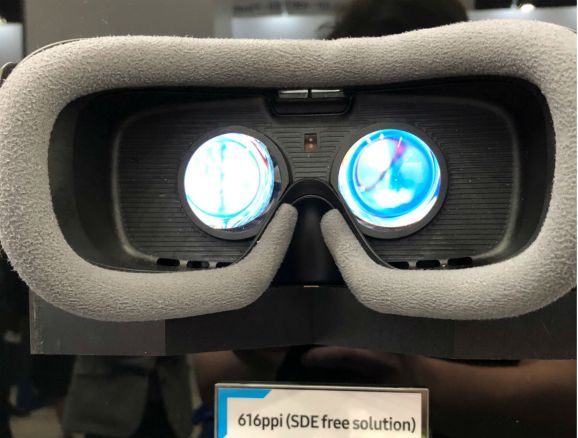 Google worked with LG to develop a display panel providing an astonishing 18.1 megapixels of detail per eye in a VR headset.

While Facebook wasn’t ready to show its Half Dome varifocal prototype in-person, the new panel from LG as well as similar ones from Japan Display Inc. and Samsung were shown during Display Week in Los Angeles.

Above: At left, LG’s 18.1 megapixel panel as shot by an iPhone 8 through a VR lens. At right, a “conventional” VR display shot the same way.

Some of the highest resolution panels, like LG’s, were shown through a VR headset’s lens, but with still images and no tracking. That makes it hard to compare how these panels might perform in a real world scenario.

Samsung had three VR headsets mounted in a row, each with more pixels packed into a smaller display.

The first one showed a comparison between the kinds of VR headsets we already have and one with a filter designed to remove the screen door effect. A poster for the movie Frozen is all that was shown with the tech, but the filter seemed to change the texture of the frame so it no longer looked like I was seeing through a screen door. Instead of seeing the lines between pixels, the fine details looked more like the grain of a frame from an old movie.

In comparison, Samsung’s highest resolution system on display offered 1200 pixels per inch but still had the screen door effect, albeit the lines between pixels were much smaller.

Unlike the Samsung and LG panels, an LCD panel from Japan Display Inc. promising “1001” pixels per inch actually showed a moving 3D picture that made it impossible to see the screen door effect at all. It was beautiful.

Here’s a comparison of the Samsung and JDI panels shot through the lens of both headsets with the same iPhone 8.

Companies also presented a variety of light field display prototypes that are likely years from commercial feasibility. Nevertheless, one day these displays might be used to provide more realistic visuals. Samsung, for example, showed a light field display on a phone in a darkened room. It was said to feature a 5.09 inch display with 1,440 x 2,560 pixels split into 26 different views.

There’s no word when we might see any of the panels that were shown at Display Week 2018 in consumer-grade hardware, but it would be surprising if headset makers like Sony, Facebook and HTC don’t incorporate ultra-high resolution panels into their upcoming designs. For example, the LG panel with 18.1 megapixels per eyeball could be combined with eye-tracking to make the rendering pipeline less expensive. We’ll bring you updates if we hear any hints these displays will actually make it into consumer hardware.