First Contact Entertainment is putting the finishing touches on its virtual reality first-person shooter, Firewall: Zero Hour. It pits four human players against four other humans in multiplayer first-person shooter matches through PlayStation VR. Coming later this year, the game can be played with a PSVR Aim controller or a standard gamepad.

I gave it a try at a hands-on session and found the experience was just like playing Rainbow Six: Siege. I couldn’t hit anything. Aiming in VR has proven to be quite difficult, and the PSVR Aim controller certainly helped. But getting good at it means that you have to unlearn what you’ve learned over the years with a 19-button controller on a 2D screen.

I talked to Adam Orth, creative strategist at Santa Monica, California-based First Contact Entertainment, about this challenge. I played a couple of multi-round sessions of the game, and I got better the second time around. I talked about shooting in VR with Orth, and I also tapped into his experience about pioneering in the VR industry over the past few years. He was kind of tired of the demo-interview scene, but he gave me some straight answers about how he sees the VR industry. 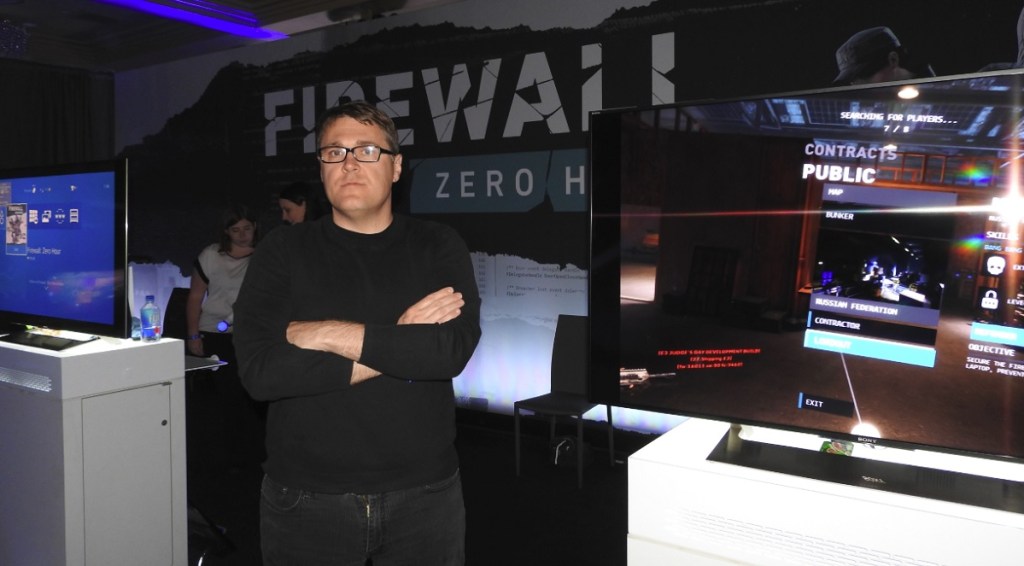 GamesBeat: How do you feel as far as what you’ve learned about VR in the last few years?

Adam Orth: I don’t know if we have enough time for that [laughs]. The thing is, I always just want to be making something that’s unique and pushing the boundaries a little bit. That was definitely the case with Adrift and for sure with what we’re doing in Firewall: Zero Hour.

We started the process of, “Well, what are we going to make,” and it was pretty simple. We looked at our studio and the legacy of games that people have made: Call of Duty, Overwatch, Halo, Medal of Honor. A pattern emerges pretty quickly. It lined up with a couple of other things we wanted to accomplish tech-wise as a studio. We wanted to do good, solid first-person locomotion in VR, which is the endless question. We wanted a fun multiplayer experience. After making Adrift — which was a very insular, in-your-own-head kind of experience — and having done some really cool VR experiences where you’re interacting with each other, that was really important.

The other thing was, we wanted to make a VR game for everyone, where beginners and hardcore players could play without any kind of after-effects that people feel in VR. We worked really hard on our locomotion system.

GamesBeat: I didn’t feel any motion problems. That’s very different from just a couple of years ago.

Orth: We spent a lot of time making sure every element of the way the player moves and the way the camera moves — even graphically, there’s a bunch of tricks we’re doing under the hood that make this game feel really good. In the last six months, we’ve had the game in the hands of quite a few people. You’re never going to eliminate it 100 percent, but we’ve got it so that it’s really comfortable for everyone. 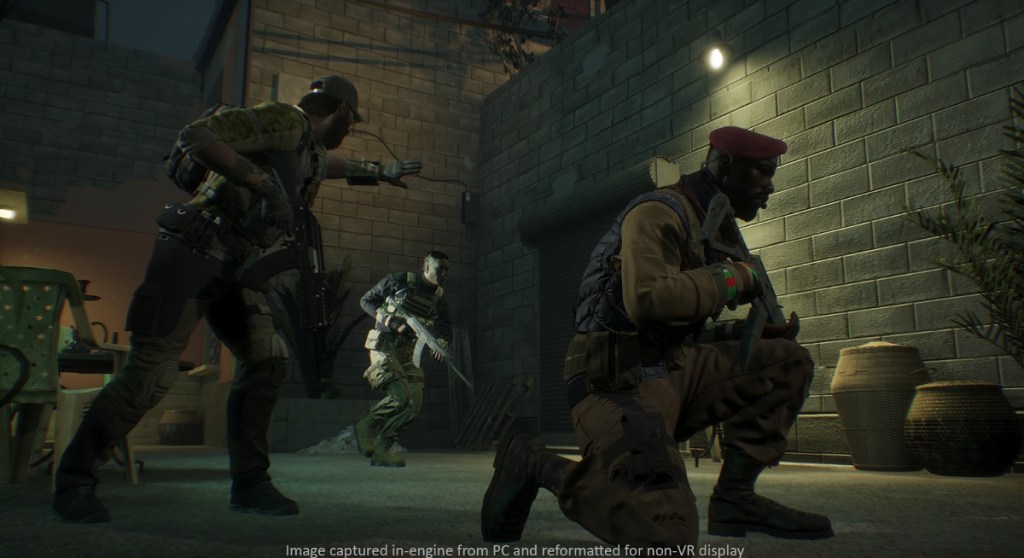 Above: You have to act like a team in Firewall.

GamesBeat: There are things you have to adjust, right? Like how fast you actually move. If you change directions, you can get out of the range of the sensor quite easily.

Orth: With PSVR, you have to be conscious. It is a feet-planted-in-place, turning-the-torso experience. You can also sit down and play it, but yeah, there’s no cameras on the side or behind you.

GamesBeat: I saw a colleague playing and noticed that she turned 180.

Orth: It’s hard not to do that. We have a visualization in the game that shows you when you go out of that range. But even when I played today, at the end of a match, I’ll take my headset off, and I’ll be turned in the completely wrong direction. It’s just something that’s hard to remember when you play all the other kinds of VR out there.

GamesBeat: But if you’re playing and you want to do well, you want to make sure you stay in range.

Orth: I think in the final, shipped version of the game, that will be a lot more defined.

GamesBeat: The thing I had more trouble with is the accurate shooting. There are some interesting different examples of that here, like Blood and Truth or Evasion. Some of them seem to make the shooting more forgiving and less precise. Some of them could theoretically go toward the Rainbow Six experience, where you’re dead after one shot. You have to lean around corners and be very careful.

Orth: Where do you think ours landed? 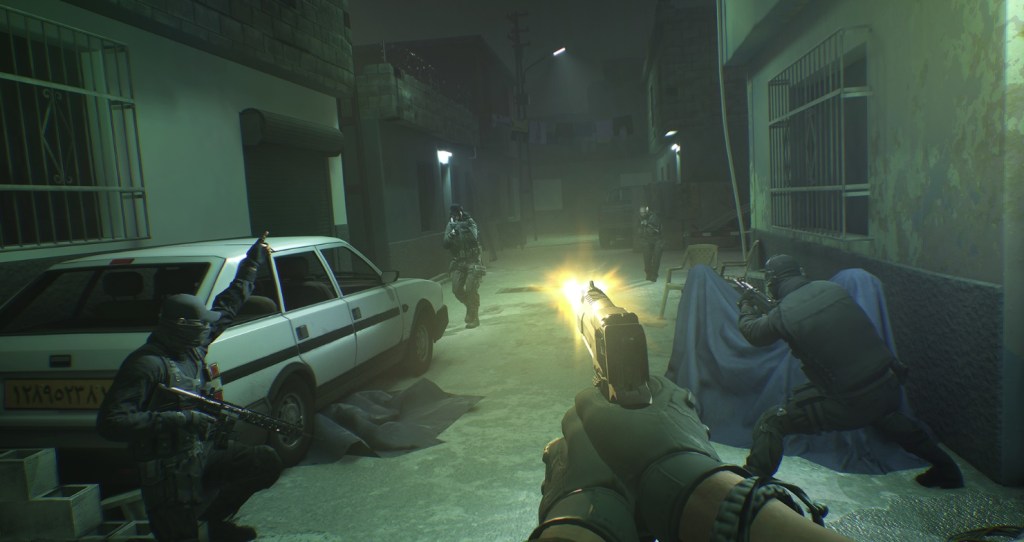 Above: The end comes fast in Firewall.

GamesBeat: I had trouble figuring out how to hit somebody the first time around because of wanting to shoot from the hip. I probably needed to aim down the sights, right?

Orth: Shooting from the hip in our game is super possible, but it’s definitely an advanced kind of thing. Really holding the aim controller up and looking down the sights, through the scope, getting that red dot, that’s good.

GamesBeat: Kind of waiting until you get the red dot on the target, right? As opposed to just getting close to it.

Orth: We want to emulate the feeling of something like old-school Rainbow Six, but we want to make it accessible to everyone. You can also play the game on DS4. It works just the same way. You move around like this. It’s a lot of fun. I prefer it that way.

GamesBeat: Blood and Truth’s answer seems to be that you’re firing a tracer bullet, and the tracer goes pretty close to the target, and then, you just adjust. The next tracer will probably hit them.

Orth: If you watch your bullet spread, that’s a good thing. Also, we only gave you a couple of different weapon choices. There are many different weapons in the game, and they’re all upgradeable. It’s full of challenges and character progression. It’s a really full-featured game. You’ll be able to customize all your weapons and your loadout to fit how you want to play. 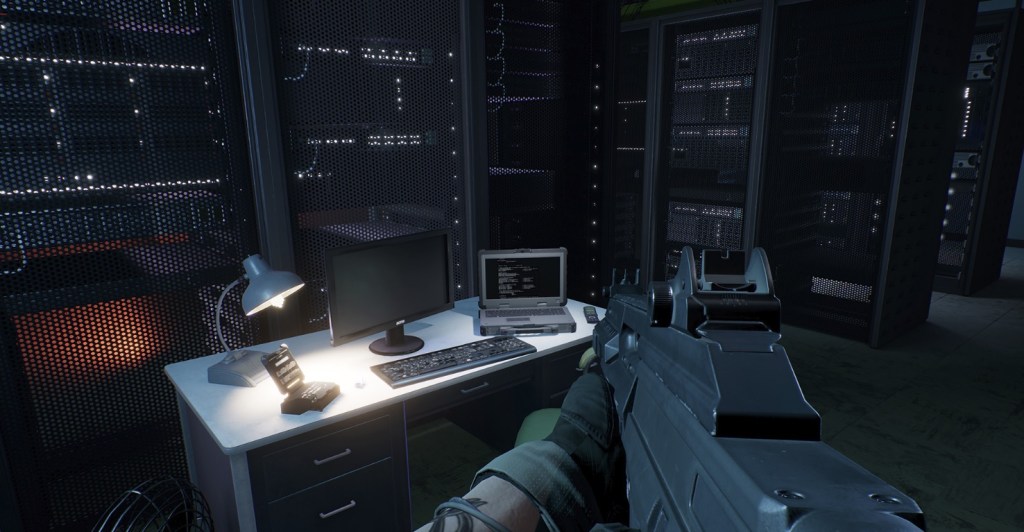 Above: I had to hack some servers in Firewall: Zero Hour.

GamesBeat: Theoretically, I would have thought that doing a shooting game in VR would be easier, more intuitive, and more accurate than sitting in front of a 2D screen with a controller. But I’ve gotten so used to that 19-button controller that it seems easier to do that.

Orth: Here’s an interesting story. We had someone in playing the game recently, and they were in a situation in a firefight where they were trying to shoot someone on a balcony. They were being fired on. This guy was taking fire. Because of the intensity of this game in VR, his hand — he got so scared, his hand started shaking in real life. He couldn’t get the shot.

Little things like that make this game really fun and unique. Marrying the real world and the virtual like that is exactly what we wanted to do. It’s cool how your body and your mind work together to influence, or not influence, the virtual.

GamesBeat: I didn’t think to crouch, physically crouch. You can do that, right?

Orth: You can do that, or there’s also a button. You can be really physical in this game. We had Austin Walker over there a while ago, and he was jumping all over the place, ducking. He was getting really physical with it. The game supports that. But again, you have to be — frankly, a lot of people might buy this game and a PSVR together and have that be their first VR or maybe even their first shooter experience ever. We really wanted to make sure that all the bases are covered there. That’s difficult and challenging to do.

GamesBeat: Where do you think you’ve wound up as far as those different dials you have to play with? Especially making it easy, fun, but accurate enough for hardcore players.

Orth: There’s a player progression in the game. Based on your level of progression, that goes into matchmaking, which is a very traditional video game thing to do, but it’s important with this game because of the VR aspect. You really don’t want to be a beginner player against a level 50 player. That would be bad for everyone. We’ve come up with a really good way to mix the players. And, of course, if you don’t want to play with those people, you can do custom matches and play by yourself or play against the AI or get your three other people together and play. It feels really good. Anyone can pick up the game and play right now.

GamesBeat: When are you shipping?

Orth: I can’t tell you the ship date, but it’s 2018. There’s a lot more info about the game coming very, very soon. We’re essentially at the end of development.