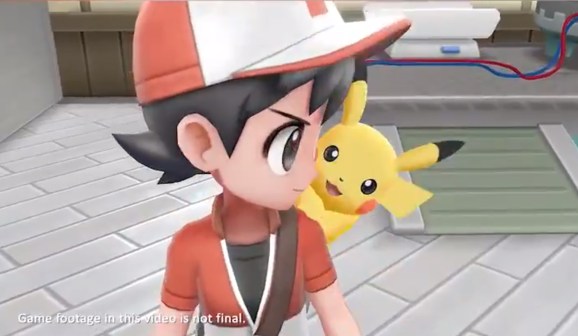 The Pokémon Company International announced that three major Pokémon games are coming for the Nintendo Switch during 2018. And these don’t include another major Pokémon game coming in 2019. Two will feature a major tie-in with Pokémon Go, the runaway hit mobile game. And it’s a big deal for Switch fans, who have been waiting for the sprawling transmedia franchise to catch up with Nintendo’s fast-selling game console.

Over 20 years, gamers have bought more than 300 million Pokémon video games. The brand has shipped 23.6 billion trading cards to 74 countries in 11 languages, and more than 1,000 TV episodes have been released over 21 seasons. And mobile users have downloaded Pokémon Go hundreds of millions of times since 2016.

Daniel Benkwitt, senior manager for consumer marketing at The Pokémon Company International, said in a press briefing that the first game we’ll see is Game Freak’s Pokémon Quest, an adventure game with a blocky art style coming to both mobile devices and the Switch.

In Quest, you’ll power up a team of Pokémon creatures and explore Tumblecube island. It’s a “rambunctious expedition role-playing game” with cube-shaped Pokémon, Benkwitt said. The game has Generation 1 Pokémon, and it debuts on the Nintendo eShop on the Switch today and on mobile in late June.

#PokemonQuest takes place on the mysterious Tumblecube Island, which is known to be filled with hidden treasures and special items. pic.twitter.com/nIqynGVu54

That will whet the appetite of fans for the next two Switch titles: Pokémon: Let’s Go Pikachu and Pokémon: Let’s Go Eevee. These games use the Pokémon Go throwing mechanic, where you throw a Poké Ball at the creature on the screen to capture it. In style, the inspiration for the games is Pokémon: Yellow Version released in 1998, said Junichi Masuda, developer of the games at Game Freak, in a press briefing. In that game, Pikachu followed behind the player instead of living in a PokéBall, similar to the character’s portrayal in the popular anime.

The two versions of the game allow you to play with Pikachu on your shoulder as a buddy in one or with Eevee in the other. Both games arrive on November 16 on the Switch and feature creatures from the Kanto region.

Just as in Pokémon Go, you play the Switch games by making a throwing gesture at the screen. But instead of playing with a smartphone, you play with the Switch’s Joy-Con controllers, which can detect gestures. You hold a single Joy-Con pad in one hand (hopefully with a strap on your wrist to keep from launching the controller into the TV), and you make a throwing gesture to toss a Poké ball at a creature. Two players can play together to try to capture creatures in co-op mode.

Masuda said that this style of gameplay is more approachable for young children, who may have been introduced to the Pokémon universe through Pokémon Go. Not everyone can play with a complicated multibutton game controller. Players will get a battle experience, but much of the game is focused on catching creatures.

“I wanted to provide an opportunity for younger kids to play,” Masuda said. “One of the unique features of the Joy-Con is you can play it with one hand.”

One of the cool features for Pokémon Go fans is that you will be able to transfer some of your Kanto region creatures from Pokémon Go to the Pikachu and Eevee games using a Bluetooth connection between your smartphone and the Switch. Asked why he didn’t enable smartphones as a controller, Masuda said the Joy-Con experience is lag free.

“There would be an input lag if you used controller,” he said, speaking through a translator in an Internet call.

As for two-player mode, you can bring in a second player with a second Joy-Con controller at certain points when you are capturing creatures. Then you can take control of a second avatar and battle to defeat other computer-controlled trainers in a single-player experience. Masuda didn’t talk about multiplayer, and he said the game will not have any trading.

“Pokémon Go was an explosive success, but kids who did not have smartphones did not get the chance to play,” he said. “We wanted to give them an experience of throwing the Poké Ball. I wanted to do something intuitive and get it in the hands of more casual players.”

Masuda started making Pokémon games back in 1989. He composed music for every Pokémon core series game to date, and he is directing the new games himself. These are the first games since he did Pokémon X and Pokémon Y in 2013. Since that time, the Pokémon franchise has started making the transition from the DS and 3DS to the Switch. Masuda said he has been working on the game for two years.

“We are in the transition and wanted to expand the user base for the Switch platform in a game you can play with siblings or friends,” Masuda said. “That’s why I wanted to make these games.”

Game Freak is the primary developer of Pokémon role-playing games.

The Nintendo Switch has sold more than 17 million consoles in a little over a year. In Pokémon Go, players have caught more than 88 billion Pokémon creatures, walked 15.8 billion kilometers, and downloaded the game at least 800 million times.

A live-action Pokémon movie is also coming in 2019 starring actor Ryan Reynolds. The first Pokémon game for the Switch was Pokken Tournament DX, which came out last fall.