It feels like the point-and-click genre is undergoing something of a revival, between excellent games like A Jolly Corpse’s psychedelic Dropsy and Terrible Toybox’s LucasArts throwback Thimbleweed Park. And Unforeseen Incidents is a solid entry into the new roster of item-hunting titles that seem to adhere to a whole different world of logic that only exists in adventure games.

The game centers on a deadly disease called Yelltown Fever that is devastating a small town. But even though the main characters are racing to figure out what exactly is causing this outbreak, Unforeseen Incidents makes plenty of time for glib banter and off-the-cuff comments from its hero, Harper Pendrell. This is both its strength and its weakness. 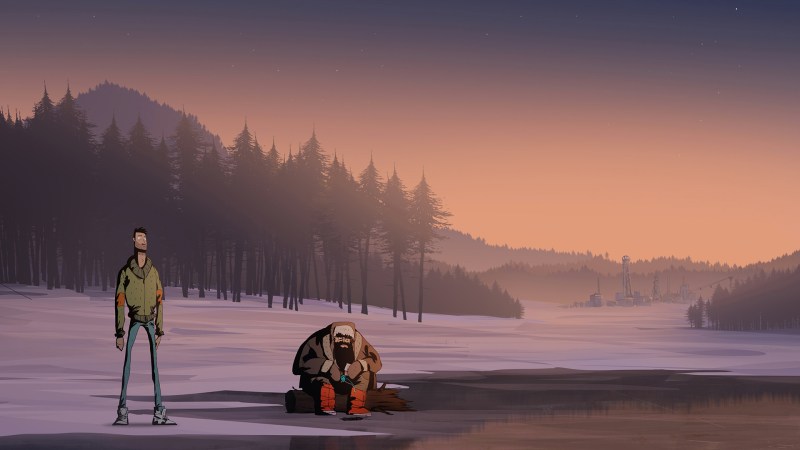 Above: Imagine this scene with the soundtrack to Fargo.

Harper is an unemployed handyman who lives in Yelltown, a small unassuming village that pretty much only has a car repair shop, a hotel-slash-bar, and a junkyard. But far from being drab, the environment is lovingly hand-drawn. Its style reminded me of graphic novels, saturated with rich colors and the characters stylized with sketchy outlines and inked shadows.

Each area popped with its own aesthetic. Port Nicola is a hipster haven, with its seaside bungalows and $7 coffees, and its town square is sun-drenched and colorful, with a little Parisian-style cafe and a huge library with a Romanesque facade. When Harper journeys to the icy wilderness, the trees fade eerily into the distance, shrouded in the grays and lavenders of a persistent, frosty fog.

Along with its eye-catching art style, Unforeseen Incidents has excellent voice acting. Matthew Curtis (the bemused slacker) and Jessica Carroll (a no-nonsense beat reporter) turn in convincing performances. And the soundtrack accompanying them effortlessly blended into the background. Though I didn’t notice the music too often, it was pleasant — and I loved the Fargo vibes I was getting from the mournful strings when Harper ventured forth into the snowbanks. 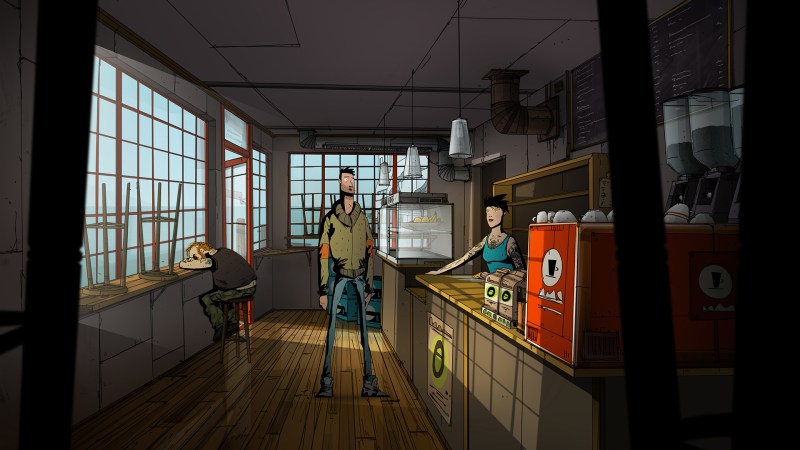 Above: Harper buys $7 coffee and snarks about hipsters.

Unforeseen Incidents has a lot to say. Harper’s a real chatterbox, and he has a comment for everything that you click on as you try to uncover the conspiracy behind the Yelltown Fever outbreak. His banter with journalist Jane Helliwell is pretty charming and amusing, and some of the dialogue deserved at least a sensible chuckle and occasionally a laugh out loud. Its pop culture references were done tastefully and sparingly, like its Twin Peaks allusions, and I never felt like I was being banged over the head with them.

Much of the game is standard point-and-click inventory puzzles — you have to use a car, but it’s been stripped for parts, so you have MacGyver a new fan belt and so on. To do all of this, Harper has a multitool, which contains a screwdriver, knife, and other useful implements that come in handy when solving puzzles. But he sometimes has to tackle some computer-based challenges, which are a delightful change of pace. In between chapters, you also solve hacking problems, which deepens the mystery. Who is this anonymous hacker? What will happen once they’re in? Above: Nothing here is useful, and you have to walk from the left to right every time to get to something that is.

Though Unforeseen Incidents has beautiful environments, I got sick of some of its landscapes because I had to stare at them for way too long. Harper moves slower than a glacier, and sometimes, the thing you want to interact with is all the way on the other side of the screen. This killed the pacing, because it made it a chore to explore the environment, which is kind of the point of point-and-click adventures.

I also experienced performance issues — some scenes took between 5 second to 12 seconds to load. This is frustrating when you’re going back-and-forth between different areas of the map, and especially so when you have to then slowly mosey your way over to whatever building you’re going to. 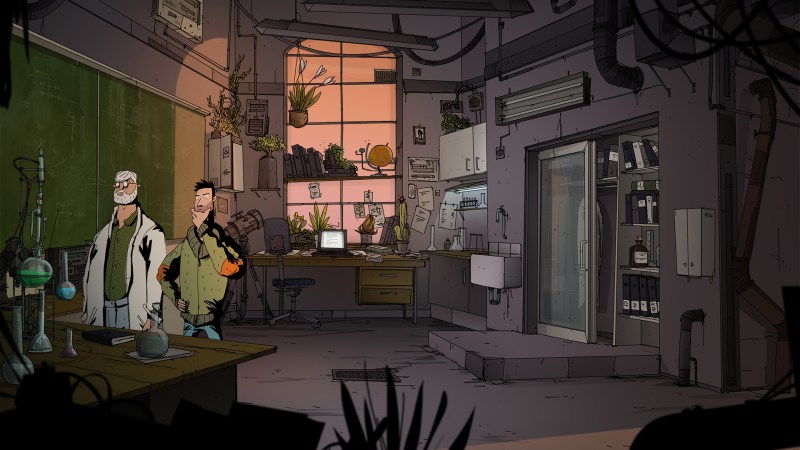 Above: Professor Macbride and Harper, hanging out in his lab.

Unforeseen Incidents’ body count is actually quite high, and the conspiracy that Harper and Helliwell are trying to unravel is one with sinister implications. Tangled up in the mess is Professor Macbride, who’s Harper’s surrogate father. However, this relationship and the consequences of the horrible events in the game don’t stop the characters from their cavalier back-and-forth. I found this a little disturbing and distracting.

When tragedy befalls Yelltown, Harper doesn’t really react to it. One out of maybe 20 lines will have the voice actor recite his line in a more somber manner, but most of the time, he’s bouncing off the walls, free associating and yelling “Multitool!” Helliwell is digging into the mysterious Yelltown Fever after getting tipped off by an anonymous source — who dies for her trouble, or at the very least is “disappeared,” at the beginning of the game. But that source never comes up again in conversation.

The tone is peculiar given the subject matter, and it made it hard for me to care about the characters. Sometimes, they felt like sociopaths. In addition to feeling alienated from the Harper and his cohort, the puzzles sometimes felt like they were completely divorced from the ongoing health crisis. Maybe it’s because searching for the solution meant listening to Harper’s little comments, which just cut through any tension or urgency in the situation. 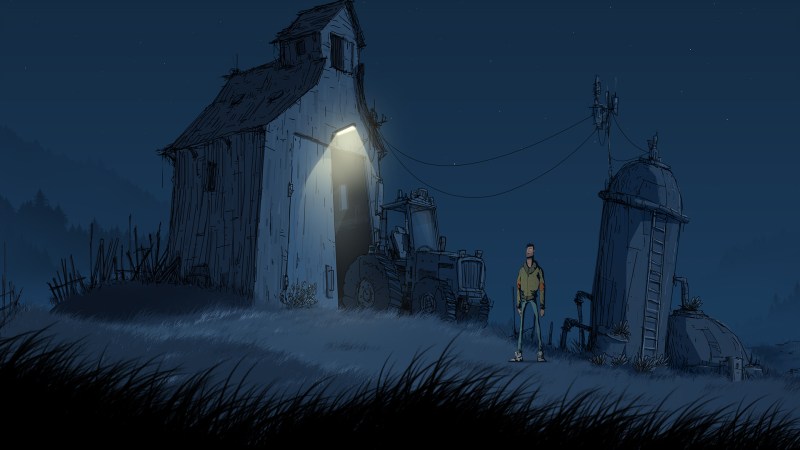 Above: This tractor is the only way to solve my problems, for some reason.

Adventure games are notorious for puzzles that have incomprehensible solutions or are simply inconsistent with real life. A few of these situations arose during Unforeseen Incidents. Sometimes Harper doesn’t let you get to a solution until you trigger the right dialogue with people. Once, he “lost” a camera from his inventory and couldn’t pick it back up even though it was right there on the ground. Even though he’s willing to smash some windows, he’s not willing to break into someone’s car. These are all convenient excuses to make the player jump through some hoops and push the story forward.

I can appreciate that this is a trope of the genre, so I don’t ding Unforeseen Incidents too much for adhering to that. However, it could be a little frustrating sometimes, particularly because Harper has a little glib comment about everything I clicked on. Sometimes that comment was way too long and made me groan and click with extreme prejudice to skip through it. And very little of this commentary actually gave me any useful information about how to use the item.

I do like that Backwoods Entertainment doesn’t hold your hand. I hate it when games spoon-feed the answers to the players. But I feel like instead of having Harper say “Multitool! Multitool! Multitool!” for the umpteenth time when I misclick on a wrench, the studio could have put in some more straightforward dialogue to help players on their journey.

Harper is amusing at first, but his cheeky asides and carefree attitude started grating on my nerves about halfway through the game. More than once, I found myself muttering, “Shut up, Harper,” under my breath. To put it nicely, he’s kind of like an annoying little brother. On the other extreme end, he reminds me of terrible roommates I’ve had in the past who just won’t be quiet even though it’s 3 a.m. and some people in this house have to work, for god’s sake.

However, Unforeseen Incidents has its charms. It looks great, and some of the puzzles are genuine fun. And even though Harper is irritating, he’s well-intentioned and a fairly good protagonist. The most serious issue for me is the loading time between screens and how slowly Harper walks. Although these issues took me out of the game, I did find myself getting pulled back in by the mystery of the deadly Yelltown Fever outbreak. I wanted to know who was responsible for it. And I was really motivated to not have Harper’s voice be the last thing I hear before keeling over from the plague.

Unforeseen Incidents is out now on PC. The publisher sent us a code for this review.