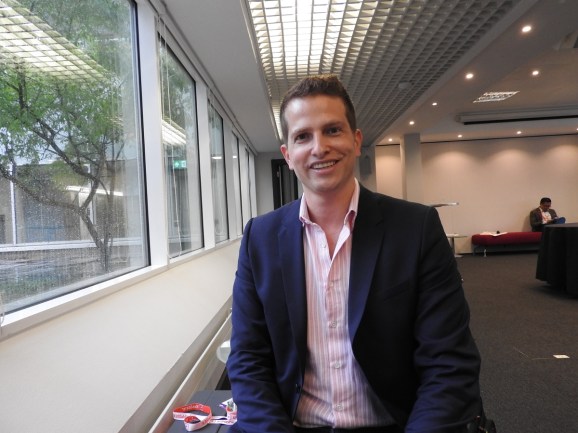 Leonard Frankel is CEO of ClanPlay.

ClanPlay has created a mobile app that serves as a social hub for gamers who play in clans in games such as Clash Royale. Now it has created what it calls the world’s first marketplace for in-game actions.

The Tel Aviv, Israel-based startup is using blockchain and cryptocurrency technology to create a reward system where gamers can essentially be paid for completing actions in a mobile game, said Leonard Frankel, CEO of ClanPlay, in an interview at the Casual Connect Europe event in London.

“Exactly,” Frankel said. “This is about getting paid to play games. We’ll create better efficiency in the market. And we’ll do good things for gamers.”

Frankel said that a lot of great gamers have skills, but they don’t have bank accounts. So ClanPlay can issue tokens to gamers as a reward. The other big problem is that advertisers are enriching platforms such as Facebook, and gamers aren’t receiving any of that money.

“They deserve to get paid,” Frankel said. “We will pay for skills in games. We have decided to solve these problems by creating a marketplace for in-game actions.”

This marketplace will be based on a new cryptographic utility token called Good Game (“GG”) which will be sold privately in the coming quarter.

“When we look at the games market, we find two major problems that require immediate attention: Games are being promoted on a centralized handful of platforms, where advertising budgets are paid to huge corporations instead of directly to the end-users, the players,” Frankel said. “And while there are numerous parties interested in paying for in-game services, there are no structured means to do so.”

Above: ClanPlay is adding tokens that can be used to incentivize gamers.

ClanPlay envisions its marketplace as an efficient system in which game developers can pay users (with ‘GG’ tokens) in proportion to how engaged they are with their games. For players a campaign could be structured to incentivize progression milestones such as watching the game’s ad, downloading it, reaching level five and even making the first purchase.

All milestones will be disclosed beforehand and payment for them would be guaranteed as part of a trust-less solution, coded into the smart contract (i.e. automatically managed by the blockchain). In addition, ClanPlay will let developers harness the power of social promotion by paying influencers (e.g. YouTubers and streamers) a share of revenues generated by players that clicked links they share.

Direct revenues sharing would align interests of both parties and create a fair-trade practice that the company expects to be attractive for tens of thousands of game influencers, whose content is currently under-monetized, Frankel said.

“Last year only 17,000 players participated in esports events and earned money from their gaming skills,” Frankel said. “They brought in an average monthly income of $550. That’s not enough gamers, and it’s not enough money. Our upcoming GG Marketplace will create a new meritocratic economy in which gamer skills are financially valuable.”

He added, “We want to take those players earning money from games and turn them into 10 million or 20 million.”

In the future, the GG token could be used to attract strong players to join clan recruitment posts, and then to encourage activity. The marketplace will offer three types of interactions: Direct Discovery Campaigns in which developers plot a rewarded journey for players to engage with their games; Peer-to-peer interactions between players and Cross-Game Tournaments where any action inside games can become a winning criterion and “game triathlons” can be formed with automatic distribution of prizes, across multiple games and even multiple platforms. Such tournaments would make for a lucrative advertising media as they could attract audiences and form unique entertainment opportunities.

ClanPlay has developed the infrastructure for this marketplace and now turns to private supporters to fund further development by selling a portion of the tokens being issued. A total of one billion GG tokens are being issued, of which 300 million will be sold in a private sale during Q2 and Q3 2018. The project’s advisers include entrepreneurs Andrey Nayman and Henric Suuronen.