Roblox is turning its expertise from making a blocky virtual world entertainment platform for kids and teens to education with a coding push.

“We’re excited that we can offer this to kids and teens,” she said.

Roblox already has a number of programs such as summer internships to foster learning among its kid programmers, and now it is formalizing and strengthening the programming and educational tools. The company can do that because it has become cash-flow positive and grown to more than 60 million monthly active users — mostly children. And many of these kids are making a living by creating games that generate life-changing income for the creators.

For instance, Roblox has created free curriculum for educators to teach children how to code within its fun world. It has create step-by-step tutorials for educators to teach about 12 hours of programming to children. There are handouts, technical setup guides, and additional resources for classroom instruction, after-school programs, and summer camps. And it’s all free under a Creative Commons license.

During the challenge, kids will embark on a mission to rescue the dinosaur Blue and learn how to use Roblox Studio to help lead Blue to safety through a series of guided lessons, including how to modify terrain as well as use code to create hazards for players to avoid. Each lesson is accompanied by a quiz that creators must pass in order to show mastery of the coding skills they learned. Upon completion, creators will receive an exclusive Jurassic World: Fallen Kingdom virtual item for their Roblox avatar. 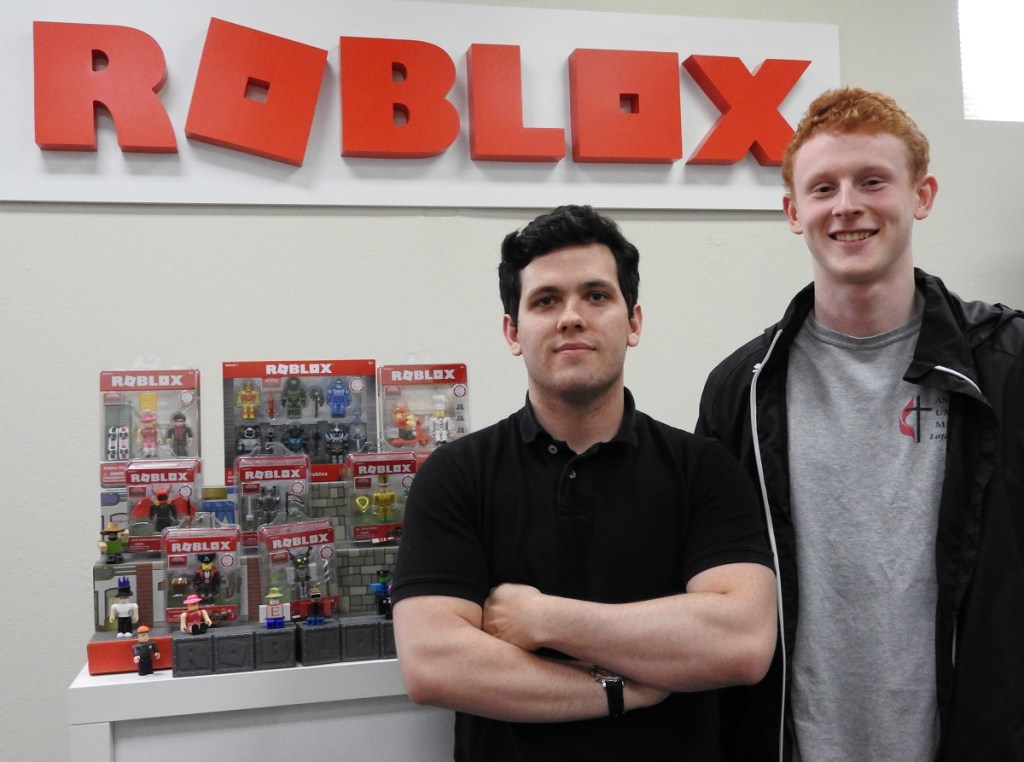 Above: Brandon LaRouche (left) and Jackson Munsell were Roblox interns in 2017.

Roblox Studio, the building tool used to create and build Roblox virtual worlds, will be used in more than 500 coding camps and online programs in eight different countries to teach creators coding fundamentals, game design, digital citizenship, and entrepreneurial skills. Each summer camp will have a customized course catering to a variety of different subject matter and skills, such as the iD Tech’s Roblox Entrepreneur, a course that leverages the learnings from young Roblox developers who have created runaway titles on the platform.

And Roblox has created an accelerator to teach the most-promising creators the technical and entrepreneurial skills to build their own businesses as they build, publish, and market their own creations. Roblox will host 45 young developers at its headquarters this summer for a 12-week program alongside Roblox product engineering and developer relations teams.

Breakaway hits such as MeepCity and Lumber Tycoon were created by young developers who participated in the Roblox Accelerator program in years past.

“This program has an application process to get into  it, and we look for people with traction within Roblox already,” Francisco said. “We coach and mentor them on things like setting up a project schedule.”

The educational programs create zero friction for children to learn how to code, and they come back to benefit Roblox with more talented and educated programmers who can build better and more playable worlds within Roblox, Francisco said.

“From a business perspective, it’s great for the community,” she said. “We want to make it easier for creators to build.”

In the future, Francisco said the company plans to roll out additional educational subjects such as game design and physics.

The company will also be inviting its top developers back to the annual Roblox Developer Conference, taking place in San Francisco July 13 to July 15, and in Amsterdam August 17 to August 19. This year Roblox will host Kristian Segerstrale, CEO of Super Evil Megacorp, to speak at its U.S. developers conference.