Survival is a constant struggle in Frostpunk‘s snowy wasteland, and developer 11 Bit Studios has unveiled new challenges that will make enduring the tundra even tougher. The Polish indie studio unveiled a 2018 roadmap last Thursday that shows the team hard at work on new features, game modes, and scenarios that will present players with a fresh storyline and obstacles. The first, Survivor mode, will roll out this month.

Like 11 Bit Studios’ previous title, This War of Mine, Frostpunk is about difficult decisions. In a steampunk world that has frozen over, players must manage a small city of survivors, gather resources, and pass laws all in an attempt to survive the temperature as it steadily drops. The city-building survival game had an extremely strong launch, selling over 250,000 copies within its first three days. 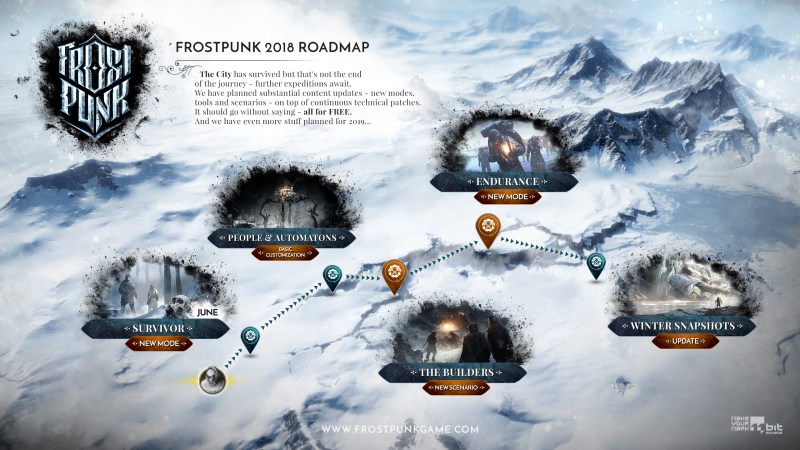 The cold by itself is already lethal, but 11 Bit Studios has a few other tricks up its sleeves. Survivor mode will throw new modifiers in the mix to make survival even tougher, while Endurance mode will eschew story beats to challenge players to survive endlessly. 11 Bit also teased a new scenario, The Builders:

“This is the most substantial update for 2018,” said the developer on its Steam page. “A brand new scenario, with its own story and challenge. We won’t spoil anything at all at the moment — but let’s just say you should stay excited.”

In addition to new content, the 11 Bit has said that it will implement a feature that enables players to name their characters as well as a screenshot tool. The developer has also said it is already cooking up more features and story ideas beyond what has been announced.