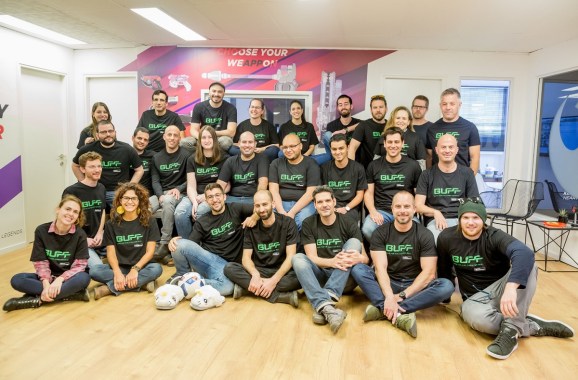 The Buff and Overwolf teams.

Buff has started a blockchain-based loyalty program for gamers, and it has teamed up with Overwolf, a company that makes it easy to add new features to games via overlays.

The Israel-based Buff is preparing to launch its Buff Coins cryptocurrency later this summer. The company has created a loyalty program which can give real-world rewards to gamers for in-game skills. The rewards will extend across multiple platforms and brands.

“The more you play, the more you earn,” said Elay De Beer, CEO of Buff, in an interview with GamesBeat. “It’s a loyalty program for gamers on top of blockchain that allows gamers to earn something.”

Each participating game can still have its own individual economy. But the Buff platform allows gamers to be rewarded with Buff Coins by simply playing through and earning in-game achievements. Gamers can then exchange those coins for in-game items across various brands and platforms.

Buff is a global loyalty platform spanning all formats. It allows gamers of all skill levels, competitive and non-competitive, to be rewarded for playing more of what they love. If you have a high kill-streak in Call of Duty, you can earn Buff coins. The same could be applied for achievements in FIFA 18 or League of Legends.

“You could be playing Fortnite or League of Legends and still earn rewards,” De Beer said.

Buff has partnered with Overwolf, a software platform designed to help develop apps for games that enhance the experience without breaking the immersion for gamers. With a gaming community with over 15 million monthly active users across mobile and desktop and prolific partners such as Cloud9, Nvidia, and Twitch, Overwolf is designed with simplicity as a focus. Overwolf will give Buff the ability to analyze what’s happening in hundreds of games.

And Buff can use that info to build reward systems. It’s similar to the idea that we talked about at GamesBeat Summit: the Leisure Economy.

“We are building a new economy here, one that unifies different parties,” De Beer said. “The blockchain technology gives the transparency and trust.”

De Beer said the system will work across lots of games.

“Overwolf are very pleased to be partnering with Buff. The emergence of token economies and blockchain technology will have a great impact on gaming,” said Uri Marchand, CEO of Overwolf, in a statement. “By joining with Buff’s project, we are taking a step towards incorporating these new technologies into our own service and ensuring that our fans are able to enjoy cutting edge developments in the gaming sphere.”

Buff has also added Wargaming’s Jay Cohen as an adviser. The former president and general manager of Wargaming America, Cohen is credited with developing and executing the business strategy and operations for one of the fastest growing brands in the gaming industry. Another adviser is Rob Dyer, a consultant and former executive at Tapjoy, Zynga, and Sony.

“We have tried to do loyalty programs in the past, but they didn’t work because of fraud and disruption in the game economies,” Dyer said. “When Elay proposed this, I thought it could work because of the blockchain. It should really help with retention and engagement, which is one of the biggest problems with games today.”

By establishing a virtual gaming economy platform based on blockchain technology, Buff will enable gamers to earn coins in the background as they continue to play without interruption. That will incentivize gamers to spend more time gaming, and it opens a new marketing approach for game publishers to interact for longer time periods with gamers to increase loyalty to their brands.

“We are a layer on top, and it is non-intrusive to a game’s current ecosystem,” De Beer said. “It is something that game developers can live in harmony with.”

The company has raised about $1 million to date, and it has 15 employees. It hopes to raise around $30 million via an initial coin offering for its Buff Coins.