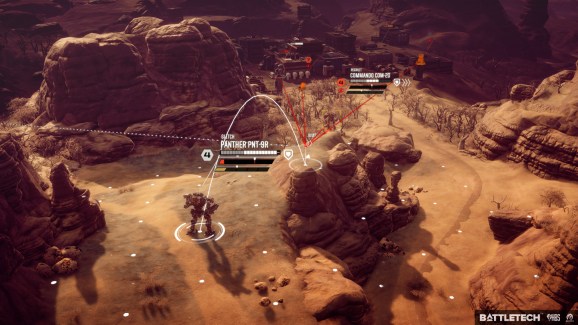 Battletech's tactical combat. A mech can jump to higher ground, but the red lines indicate whose line of fire it'll be in if it does.

Paradox Interactive announced today that it will acquire Harebrained Schemes, the studio behind PC turn-based games such as BattleTech and the Shadowrun series. Paradox published Battletech.

The Seattle-based Harebrained will now be a division within Paradox, which specializes in strategy games. Paradox Development Studio is responsible for series such as Stellaris and Europa Universalis. Having Harebrained as part of its team will help build that strategy game pedigree.

“Harebrained Schemes have proven themselves as a world-class studio with a very talented team within a genre where Paradox wants to be present,” said Paradox Interactive CEO Fredrik Wester in a press release sent to GamesBeat. “In addition, we really like the studio, the people who run it, and their games; these are all absolute hard criteria for us in any acquisition. Our recent successful launch of BattleTech, our first project together, has been a fantastic collaboration, but the possibilities of what we can do together in the long term now that we’ve joined forces — that’s what has us truly excited.”

Harebrained will have its own internal management and creative teams as part of Paradox.