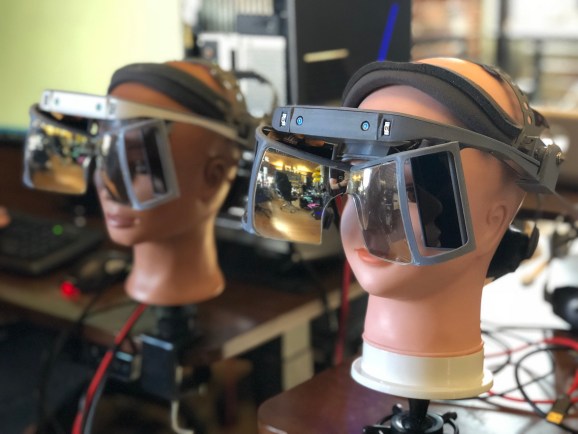 Back in April, Leap Motion announced Project North Star, a next-generation augmented reality headset that the company said could be produced for $100 at scale. Today, Leap Motion announced it is open-sourcing North Star’s design and assembly guide under an Apache license, giving interested users and developers the ability to build their own AR headsets — a step that could advance AR’s role in productivity and PC gaming.

The headset’s specs are intended to be modern rather than basic, most notably including two 1600 x 1440 pixel translucent but bright screens running at 120 frames per second. As the screens are large and angled outwards, they permit a 100-degree field of view — greater than some existing AR headsets — while an integrated hand and finger tracker covers a wider 180-degree area. Accompanying software enables hand motions to serve as an input interface for a tethered computer, manipulating and interacting with computer-generated AR objects.

Videos released by Leap Motion show 3D printing of the headset’s components, which come together to create an awkward-looking pair of glasses that nonetheless enable users to overlay virtual objects on views of real scenes. The company says that it built the headset with “as many off-the-shelf components and 3D-printed parts as possible,” though the kit does require a custom-made hand tracking module, display driver board, and reflectors.

Though experiments have been ongoing for quite some time, augmented reality is expected to take off commercially over the next several years as research projects and unaffordable initial hardware transition into practical and less expensive products. Leap Motion has said that its goal is to “stimulate discussions concerning the human experience with augmented reality, as well as improve accessibility and accelerate experimentation,” bringing about a merger of the physical and virtual worlds.

Affordable headsets and usable software will go a long way toward accomplishing that, though to achieve mainstream popularity, the headsets will need to shrink and become more like regular glasses. In the meantime, companies such as Apple and Google have released robust phone- and tablet-based AR solutions — including some neat demos — as they continue to work on consumer headsets. Leap Motion’s solution provides developers and early adopters with an inexpensive, wearable alternative.

The open source North Star materials are available through the Leap Motion website now, including links to a GitHub repository. Leap Motion says that it will continue to update the core release package and release additional AR UX designs, including Virtual Wearables and Desk UI.