Sega Europe and Creative Assembly revealed the first in-engine cinematic trailer for Total War: Three Kingdoms, the next historical title in the Total War strategy series. Launching in the the spring, the game is inspired by a romanticized version of history in Luo Guanzhong’s 14th century historical epic about China: Romance of the Three Kingdoms.

It follows the dramatic lives and deeds of near-mythical warlords and their retainers in second to third century China as they try to unite the country under their rule and forge the next great dynasty.

Creative Assembly revealed the first look at the gameplay and cinematics (which will be created within the game engine) for one of the leaders of the game, Cao Cao. A cunning mastermind (and evidently solid Go player), Cao Cao aspires to be the ruler of China.

Above: Top down view of Total War: Three Kingdoms.

The leaders will make grand speeches as they command their troops to take cities. As in traditional Total War games, you can zoom out on a strategic map to move your armies around the map. And when two armies meet, the camera zooms in on the battlefield, where you can fight the battle in real-time with thousands of soldiers at your command.

Total War: Three Kingdoms also features “legendary duels,” according to Sega. In a first for the series, the game features a “romanticized” version of the period including generals with preternatural fighting abilities able to tackle scores of enemy troops single-handedly and heavily influence battles.

However, true to the series’ legacy, the game will also feature a Classic Mode that offers a more grounded, historically authentic Total War experience. 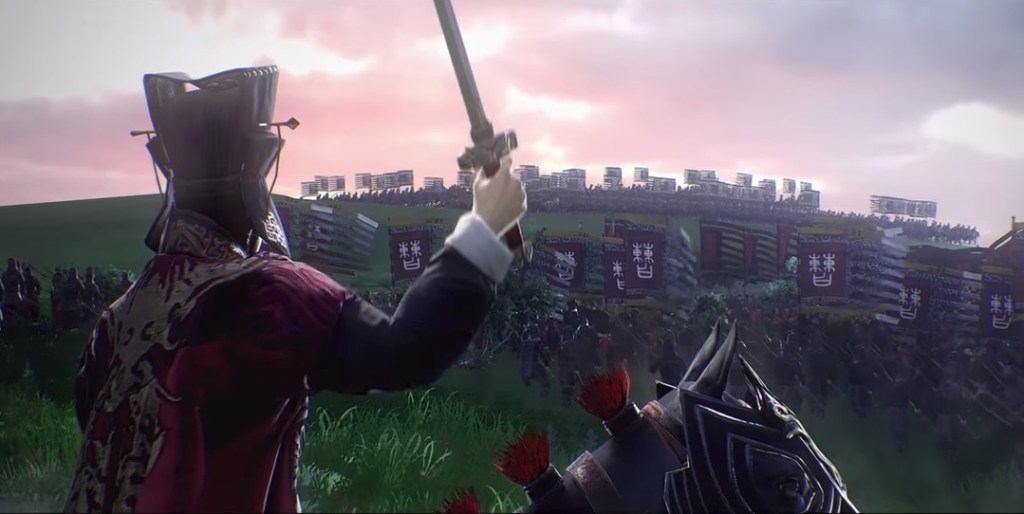 Above: The new engine for Total War: Three Kingdoms can create gorgeous imagery.

The art looks gorgeous in the trailer, and it is a step up from previous cinematics from Total War games. The human faces look good. The battles look epic, and the terrain looks realistic. Embers flow through the air, the grass sways, the sunsets glow, the clouds part from each other to reveal a clash of armies. When the enemy’s soldiers charge a phalanx of pikemen, they bounce off the formation.

But the trailer emphasizes the battle of wits between warlords, suggesting there’s more resemblance to the narratives of the Three Kingdoms, which recounts the stories of different warlords as characters in a romanticized history. In early Total War games, it was really all about the strategic and tactical battles, not the leaders. But that changed with the Total War: Warhammer games of the past couple of years, where characters and personalities made the subject matter more interesting.