Amazon today announced the newest addition to the Fire TV family: the Amazon Fire TV Cube. It’s a 4K Ultra HD-capable set-top packed with IR blasters that can control AV systems and televisions, far-field microphones that listen for Alexa commands, and access to a wealth of entertainment apps, like Showtime, HBO, and Netflix.

The Fire TV Cube is available for preorder today starting at $119 ($89 for Prime Members on June 7 and 8 only) and comes bundled with an ethernet adapter and an IR extender cable. For a limited time, Amazon is bundling it with the Amazon Cloud Cam, the company’s cloud-connected security system, for $199, and is extending $10 in Prime Video credit to customers who order by July 1.

The Amazon Fire TV Cube offers the array of standard features existing Fire TV owners have come to know, including compatibility with Alexa. Users can launch apps (“Alexa, launch Starz”), search for movies by actor, director, and genre (“Alexa, find drama”), control playback (“Alexa, pause the movie”), or even ask about the weather (“Alexa, what’s this week’s forecast”) with voice commands. They can also program routines that trigger multiple devices all at once; “Alexa, good morning,” for example, could switch on the TV, speaker system, and other Alexa-compatible smart appliances connected to the same Wi-Fi network. 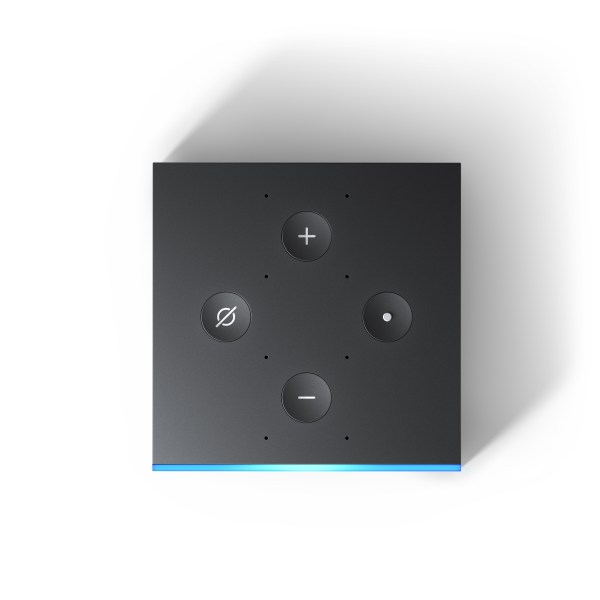 The aforementioned far-field microphones, of which there are eight, use beamforming technology — the same featured in Amazon’s Echo speakers — to combine the signals from individual microphones and suppress noise, reverberation, content playing on the Fire TV Cube, and competing speech. There’s also a bundled remote with an integrated microphone for situations when you’re out of the speakers’ range.

“We believe voice makes it easier for customers to control their entertainment systems and watch the TV and movies they care about,” Marc Whitten, vice president of Amazon’s Fire TV division, said in a statement. “And it’s just the beginning. Amazon Fire TV Cube will only get better over time, with the Alexa service always getting smarter.”

But the Fire TV Cube’s standout feature might be its support for set-top cable boxes. Thanks to a combination of infrared technology and HDMI CEC, the Fire TV can control not only sound bars, TVs, and surround sound systems, but cable and satellite boxes, as well. Enter your ZIP code and cable provider during setup, and you can switch channels by saying commands like, “Alexa, switch to channel 15,” and, “Alexa, switch to ESPN,” or adjust the volume of a TV or soundbar when you’re viewing content on a different HDMI port. Amazon says the Fire TV Cube is compatible with set-top providers including Comcast, Dish, and DirecTV.

Other highlights include access to thousands of apps from the Amazon App Store — such as streaming services HBO, Showtime, and Starz — through Amazon’s a la carte Amazon Channels service.