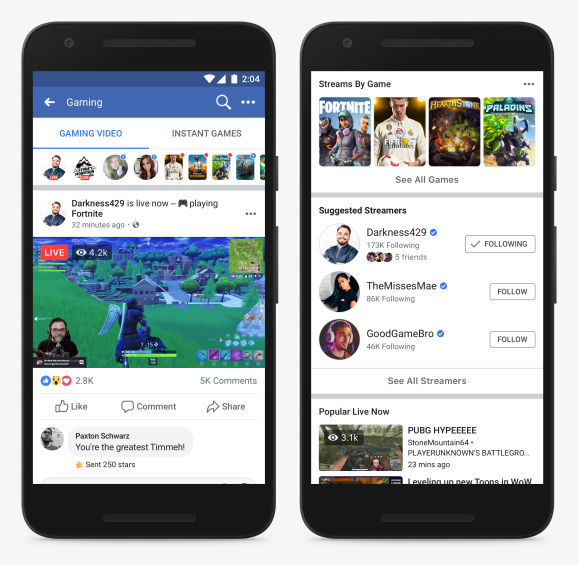 Facebook launched its Gaming Creator program in January to boost gaming livestreams on its platform. It’s now building on that with its Gaming Creator landing page, which acts as a hub for relevant broadcasts, as well as the Level Up program, which will give emerging livestreamers access to monetization tools and marketing support.

The Gaming Creator program debuted in January to encourage folks to stream PC, console, and mobile games on Facebook. Since its launch, the program has expanded outside of North America to South America as well as the Asia Pacific region. It’s also beefed up the ways broadcasters can monetize their channels with the introduction of Facebook stars, which is similar to Twitch’s bits, are a way for viewers to tip creators during a livestream. Recently, it also rolled out a subscription feature, which enables folks to subscribe to broadcasters for $5 per month and get access to locked personalized content.

Tim “Darkness429” Havlock is one of the broadcasters in the Gaming Creator program who has found success on Facebook, racking up 175,000 followers in four months. He views the new subscription feature positively, especially because broadcasters can customize what kind of private content they want to provide for those kind of supporters.

“For me, I do supporter Saturdays,” said Havlock in a phone call with GamesBeat. “All the supporters have an opportunity to come play games with me. They also have the chat badge. Stone does supporter-only streams and supporter-only videos. You can do Q&A live streams or post behind-the-scenes pictures. The limit is your imagination as to what you want to do with that.”

Havlock thinks he’s found success on Facebook versus other platforms like Twitch because people are “more comfortable when it comes to clicking around and playing with posts.” He felt like Twitch was more siloed. Another difference in user behavior is he’s seen less toxicity because people are using their real names instead of anonymous handles. At this point in his broadcasting career, he uses other tools like Discord or Twitter to engage with his community, but he views his Facebook page as the central hub.

Facebook is hoping its Gaming Creator portal, FB.GG, will get even more people to watch broadcasts like Havlock’s. Users can browse according to which games they’re interested in, and it also serves up suggested livestreams based on users’ interests.

“You’ll notice it looks a bit similar to news feed, but at the top you see gaming-specific content, both for gaming video and for our games platform, Instant Games,” said Facebook product manager Nick Miller. “You have your streamers that are currently live, or games you follow, at the top for quick access. Things you engage with all the time and actively follow. Then there’s what is essentially a feed, where you can scroll through and see all the relevant content that maybe you missed, or that you don’t know about, that you’d also be interested in. That could be video. It could be news articles. It could be other games.”

That’s to get more viewers watching the videos. The Level Up program, on the other hand, is the social media site’s effort to get more content creators. Facebook’s gaming creator program lead John Imah says that the team is looking for broadcasters that fit four criteria:

“First, we want the creator to create a gaming video creator page, which is obviously quite simple to do,” said Imah. “Second, the frequency. Creators need to be live at least four hours in the last 14 days, and streaming for at least two days in the last 14 days. The third requirement is having at least 100 page followers, and then the last thing is, they meet our community standards and monetization standards.”

Once a streamer is accepted into Level Up, they can access Facebook stars and tips for best practices for how to grow their community and improve their broadcasts.

Despite competitors like Facebook, YouTube Gaming, and Microsoft’s Mixer, Twitch has become virtually synonymous with livestreaming. The platform averages almost a million concurrent viewers at any given time, and it frequently rolls out new features, including a video-on-demand tool kit that takes aim at YouTube.

But other sites aren’t backing down easily. In April, YouTube partnered with StreamElements to bring the live-video tool to its platform. Mixer has its unique HypeZone channels, which switch between streams during a multiplayer game like Fortnite or PlayerUnknown’s Battlegrounds. Last year, Facebook announced an exclusive deal with the Electronic Sports League (ESL) to stream its Counter-Strike: Global Offensive tourneys. And with its Gaming Creator and Level Up programs — as well as the FB.GG portal — it’s hoping to attract more broadcasters as well.