If anyone succeeds in turning virtual reality gaming into an esport, it will probably be Ready At Dawn Studios. The Irvine, California-based studio created Lone Echo and Echo Arena for the Oculus Rift in 2017, and it’s back this year with a new title called Echo Combat.

Lone Echo was a single-player VR experience driven by a story about a robot and a human crew member surviving a disaster in space. Echo Arena was a companion multiplayer game where two teams tried to score points on each other with a flying disc while maneuvering through zero gravity. And Echo Combat takes that same environment and awesome physics and enables team fighting in VR.

Ready At Dawn Studios is making the game as an exclusive for the Oculus Rift and Oculus Touch. The game will be available as a free open beta on June 21, and it will be $10 at launch. While other developers have shied away from VR, Ready At Dawn Studios has plunged into it, so it can learn how to create games in what it believes will be a huge market in the future.

I played a demo of the game and interviewed Ru Weerasuriya, president and creative director of Ready At Dawn Studios. I thought it was a great five-versus-five multiplayer experience, with unique first-person combat features. I could grab onto a structure and pull it close to hide behind it, and then pop my head out to shoot at other human enemy players in a firefight. 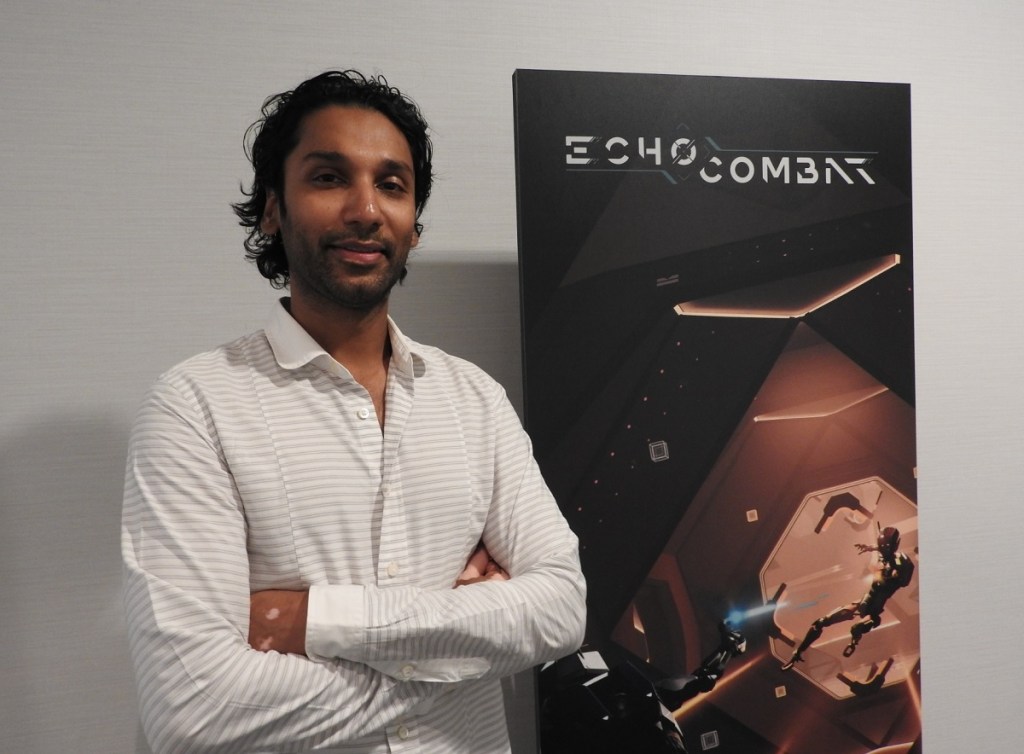 GamesBeat: You guys have been busy. One a year. The first two — were they concurrent?

Ru Weerasuriya: Yeah, concurrent, same date. And then one this year. We have more stuff ahead.

GamesBeat: This one looks like you’re able to make a lot of use of what you’d done before, but still come up with a different game.

Weerasuriya: As we said, for us, the genre was a kind of sub-genre of what we did before. For example, the movement model is the genre, and then we’re building all these sub-genres. We have the basis to start it. Building that movement model created the genre of game we wanted to build on. Then the story came out, the sports game came out.

This one, for all that we have the foundation, so much will need to be rebuilt, even physics-wise, all of those things that are functioning there. So much needs to be done. It was cool for us, because this game ends up being probably the most accessible of all the ones we’ve done. People who jump in just get it. The ramp up from there is really cool to see.

GamesBeat: I think I did pretty well, but I didn’t see a score or anything.

Weerasuriya: Yeah, there will be scores and all that. Right now we haven’t put the leader boards in. We’re doing so much training that there would be a huge imbalance between the people who have experience and the people who don’t. But yeah, scores will be there. 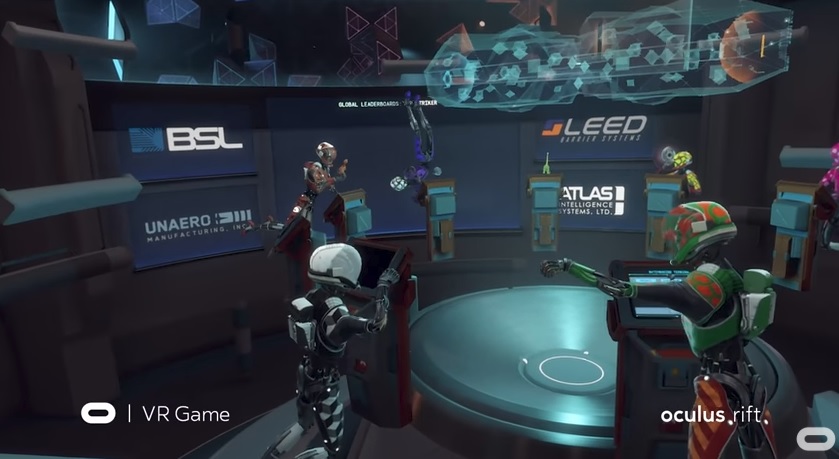 Above: Players can strategize in Echo Combat before the match starts.

GamesBeat: How much training do you think is going to be required of people?

Weerasuriya: Well, what do you think? I’ll put it this way. Watching you play, watching most of these guys play, even the few who had never played in VR—we had one match where there were two people who hadn’t experienced this movement model and all that. It took them maybe the first half of the game before they were comfortable, and they still won the game, which was incredible.

I don’t think it takes a lot. It’s pretty intuitive once you understand it. I’m curious to see how good people get with the tactics, because of the different loadouts. The interesting part is going to be that anybody can build out their class the way they want to. They’re not bound by a class. It doesn’t say, “You picked a tank, so here are the three things you have to play with.” We’ve seen a lot of people go for a mix. It’s pretty cool. Three weapons, three abilities, and two grenades give you a lot of fun ways to play.

GamesBeat: If somebody knows how to use the grenades, they could have stopped me from hiding, right? I was holding on to something, shooting, and then hiding out.

Weerasuriya: Right, right. They need to use the arc grenade, which will disable you right there, and then somebody can come in and do a single shot on you, pretty much.

GamesBeat: How many shots did you figure would be good to get a kill?

Weerasuriya: It depends. For example, the Comet takes one charged-up shot to get you practically down to no health. With the Pulsar it takes a lot more. Same thing with the shotgun. But at close range, the shotgun will take you down pretty far.

GamesBeat: What was the pistol weapon I had, the basic one?

Weerasuriya: That’s the Pulsar. That’s more like the assault rifle. It takes quite a bit more shots. We still haven’t dialed in everything, but there’s a good balance so far. If you want to play the Comet, if you want to be sniper, you can play from far out. You can hold on to something, use the laser sight, and if you get a single shot, a friend of yours can go in and finish the guy off in no time. 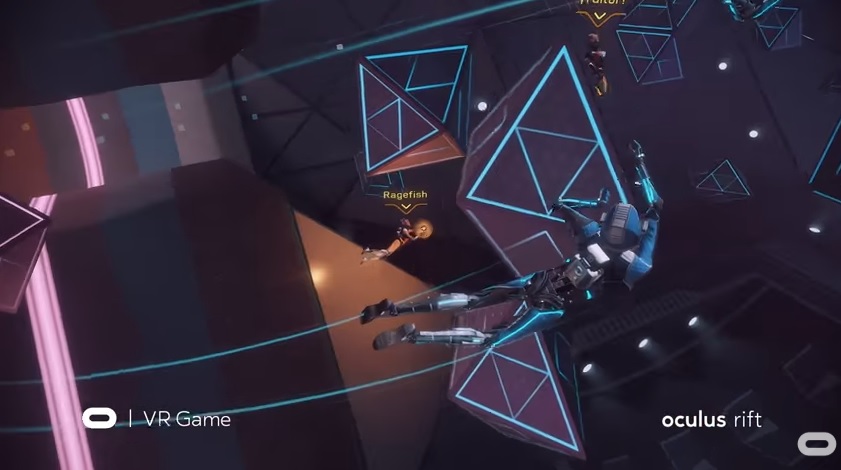 Above: Echo Combat lets you fight in zero gravity.

Weerasuriya: It could be? I think we’re in the same space we talked about before Echo Arena came out. We’re really trying to see where it goes. Right now we feel that a game like this deserves a lot of back end for the esports side. We’re planning on a lot of stuff, but we also want to see what the community builds around it and what they expect of that kind of interaction. Esports, again, the community will decide. But we plan to make sure that there’s competition in there, whether it’s just the leaderboards and the rankings, or if there’s more behind it.

GamesBeat: The maps seemed pretty good for communicating with other players. Saying, “I’m going over here” and so on.

Weerasuriya: The tactical side is pretty cool. We’ve seen a lot of people who, after they’ve played for a while, truly get good at staging. Not just attacking as soon as they get into the arena. We’ve seen attacks staged in a way that was really interesting, where they pushed the payload to a certain point on purpose, and then let it go to basically let it loose and come back. They would tactically take out people, and then one guy would go back to the payload. It was really interesting to see how people build different tactics.

GamesBeat: Is the movement model pretty much done at this point, or have you been continuing to refine it? It still seems like this kind of game needs wider accessibility as far as keeping people from getting sick.

Weerasuriya: We’re always refining it. Every game, we try to find ways to make it feel a little better as far as the way it feels to push off the world. It doesn’t stop for us. This already has some improvements to how the response feels. But the movement model itself is there. It’s just a question of dialing it in to make it feel right for everybody.

GamesBeat: How is your confidence in VR overall right now?

Weerasuriya: It’s pretty high. One thing we’ve found out, again – and this is why we’ve continued doing VR, but also continued doing traditional games – is that VR is just another avenue for game design. We don’t see these as two things that are completely separate. It’s not as if one is going to survive and one is going to die. It’s almost as if one informs the other. The work we’ve done in VR for the last three years now is very much informing some of the ways we think about gaming in the traditional sense. Everything works in one cycle.

With Oculus Go, when we got ours, I went home that night and put it on, and literally—that moment when you realize that all it took was taking it out of the box, downloading the app, connecting—I had my first experience within 15 minutes, or not even that. There was no technological barrier like some people find with traditional headsets. We’re getting there. We have far to go still, but it’s an experience you can’t have anywhere else. I can’t think of this going away because of that. VR is a completely different new medium. I don’t think it will go away.

GamesBeat: As far as what you’ve learned from last year to this year, what’s been interesting?

Weerasuriya: We learned a lot from the social side of things, the player community and how they’ve interacted, what they find important and what they don’t. Even the way we approached Echo Combat. This could have been a hardcore first-person shooter, but we found out that because of the immersiveness of VR and all that stuff, we wanted to make it a little lighter.

It has all the tactical elements of a shooter without the heavy feel. You feel like you want to get back in there. There’s no fear of being knocked out. After what we’ve found out with VR and the way people interact—we wanted to embrace that side. It’s why you see the flamingo in there as well, as the payload. There’s a levity to it, but it also has the huge tactical side from a traditional game.

We’ve learned a lot even from the things we did on Lone Echo, as far as things that worked and different interactions people enjoyed. Our physics system and how it works when it’s networked, all of these things are improvements from last year. 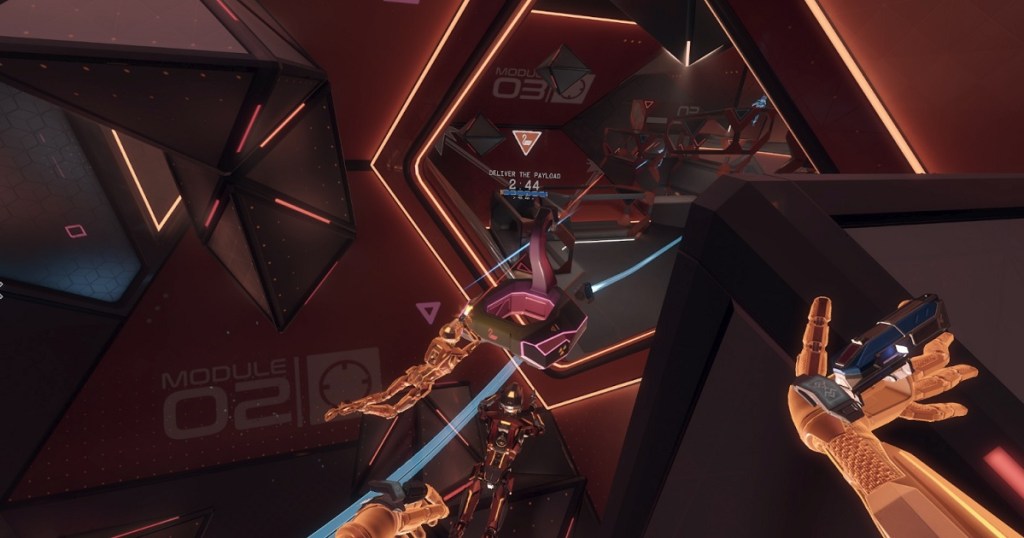 Above: Echo Combat lets teams fight it out in a zero-g arena where they can hide behind cover.

GamesBeat: How many maps and modes are you going to have?

Weerasuriya: We haven’t really announced that yet. Right now we’re working on the one you’ve seen here. There’s more to come. There’s more overall content on the way. In open beta we’ll have a restricted amount because we’re trying to test things. Open beta will be in June, by the way. We’re trying to get a measure of the things that are core. But in the long term we have plans not just through launch, at the end of the year, but we also have plans way beyond launch for more content, whether it’s pure content or more game modes and things like that.

GamesBeat: Are you still feeling good about the Rift?

Weerasuriya: Yeah, yeah. We’re looking at the improvements to the Rift HUD, new things that are happening, and we’re excited. I feel like the pace at which we’re going—some people who were there very early got kind of scared the second year. I look back on VR and where we are, given the amount of time we’ve had, and we’ve actually gone faster than almost any platform. Nobody thinks about it that way. They want speed before the content is there. Right now I see the leaps we’re making on the technology side and on the software side. We’re going faster than any time I remember in gaming.